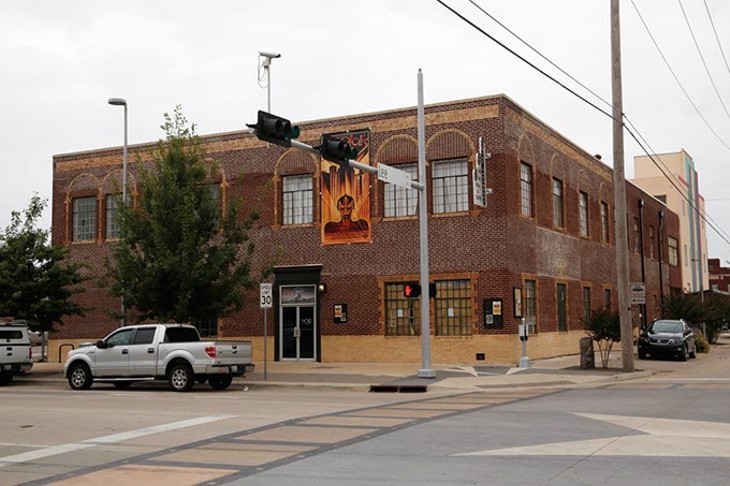 Oklahoma City’s Film Row was described as a Skid Row less than ten years ago. Now, the stretch is booming, and one of its most treasured structures is continuing to evolve.

The Paramount Building, 701 W. Sheridan Ave., is one of the original film distribution houses that gave the district its name. It houses a movie screening room, a performing arts space and an eatery that will soon re-open as Noir Bistro & Bar.

Film Row follows the lead of Plaza District and Automobile Alley as it fosters an eclectic community of artists, musicians, designers and planners.

Despite the area’s cinema-related history, the Paramount is one of the few places that regularly screens movies and cultivates film culture.

“We wanted the building’s character to be preserved,” said Melodie Garneau, one of three partners who own the building. “There are a lot of people working on properties in this area, for retail or apartments, but nothing film-related. We started early on subleasing to people working on films.”

WeerNProduction and Indian Head Pictures, two production companies, are housed in the Paramount.

Documentary filmmaker George Adams bought the restaurant and the film screening business from Garneau and her partners and is now renting those spaces within the venue.

“We want to bring art and entertainment back to Film Row,” Adams said, pointing out that Carpenter Square Theatre and Civic Center Music Hall are close. “We can make Film Row a destination for people to come get a bite to eat, have a drink, see a movie or a play and have an evening of entertainment all within walking distance.”

Adams promised there will be several film festivals at its screening room next year and deals are in the works to bring theater groups into the performance space.

Noir Bistro & Bar, formerly The Paramount OKC, was set to open this fall, but the opening was pushed back due to ongoing renovations. Adams said its menu focuses on local ingredients and offers sandwiches, salads, entrees and Sunday brunch.

Inside the Paramount, there is a heavily riveted steel door leading underground. It secures a vault where reels of film were stored when the structure was used as a distribution warehouse between the 1920s and ’50s.

The nitrate film used before the 1950s was highly flammable. Most distribution houses like this one used fireproof vaults to safeguard the dangerous material.

These architectural touches highlight Film Row’s rich history. The district is listed in the National Register of Historic Places because of its significance.

It was one of 35 hubs around the country where big Hollywood studios shipped movies for distribution to local theaters.

“The Paramount still has its screening room intact, which makes it really special,” said preservationist Catherine Montgomery, who has worked on projects like the Ambassador Oklahoma City hotel, 1200 N. Walker Ave.

In June, she moved her business, Preservation and Design Studio, into the venue after outgrowing space in Midtown.

Across the hall from her office is the studio of violinmaker Arsenios Corbishley.

“It’s a very creative environment,” Montgomery said. “We heard him playing the first day we moved in and I knew we’d made the right choice.”

All of the structure’s useable space is currently rented, Garneau said. Even the metal extension that once served as truck parking in the ’50s was repurposed into The Plant Shoppe.

Several offices and studios are tucked away on the third floor. That’s where Corbishley crafts and repairs stringed instruments.

“Funnily enough, the space is very inexpensive for someone like me who doesn’t need a ton of room,” said Corbishley, noting that the location is close to his clients who play with the Oklahoma City Philharmonic. “It’s exciting to be in this up-and-coming community.” 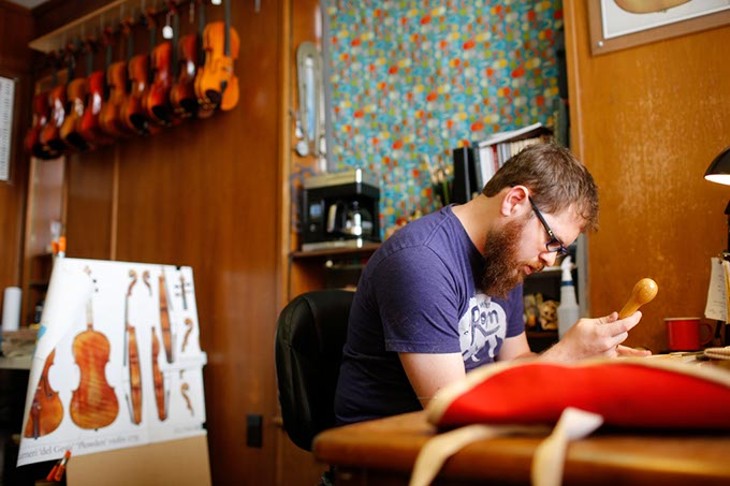 Elevator doors must be opened manually, making it all but useless for those with mobility issues. Montgomery has been helping restore parts of the Paramount, and her first order of business is to install a new elevator on its west side.

“There’s always a balance to be struck,” she said. “What’s special here is that the owners have made a commitment to stay connected to art and the making of art.”

Print Headline: Anchoring Row, The Paramount Building blends the old with the new and houses a wealth of diverse businesses.