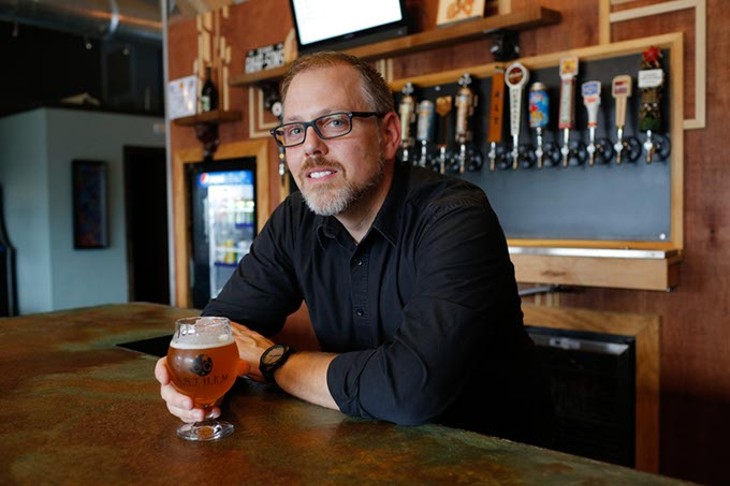 “I just wanted to get the damn thing open.”

The view of the stage from the second floor of The Root, Benny Jacobs’ new craft beer bar in Paseo Arts District, is perfect. The temperature is not.

“It’s still a work in progress,” he said as he leaned against a pool table.

The air conditioning will soon be routed through the venue’s top level, and he will add a three-tap system to make it into a viable VIP area.

Jacobs and co-owner Adam Shelton could have waited to open until that work was finished, but Jacobs said they’ve waited long enough.

The bar at 3102B N. Walker Ave. has been a passion project for Jacobs since leaving the corporate world behind 15 months ago.

It took the pair nine months to get the former Twisted Root Gallery rezoned and another five months to build it out. Even so, it’s not quite what he imagined when he set out to open a bar.

“The license here is a Class B, so we can serve strong beer and wine,” he said. “It hurt my heart a bit.”

That’s because Jacobs is a craft cocktail enthusiast of some note, mixing drinks at art events across the city. His initial plan was to open a bar where he could serve any concoction he could imagine.

So when he realized that wasn’t in the cards at his current location, it stung. But he said it was also a blessing in disguise. The Root is a stone’s throw from Paseo Grill and a quick jaunt to Picasso Cafe. Farther south on Walker Avenue is The Pump Bar, and a quick turn on NW 23rd Street will get you to Rockford Cocktail Den.

“I don’t know if this area would support another craft cocktail bar,” Jacobs said. “So I decided to do a craft beer bar and live music dive.”

The walkable district surrounding The Root makes it ideal for a neighborhood bar, but with all options that craft beer lovers want, he said.

With 18 taps and a giant refrigeration unit hidden downstairs, the bar has a better selection than most taverns its size, and it’s remarkably well-connected, too.

Using a system called TapHunter, the bar updates the beer list live every time someone changes out a keg. It automatically sends out Twitter and Facebook updates about the newest brew available, and it changes the menu displayed above the bar.

The beer list is a mix of local, national and international varieties, but Jacobs is proud to keep a big chunk of the menu reserved for Oklahoma’s prospering brewery varieties.

“I keep the selection about 40 percent local,” he said. “There are so many great local breweries making delicious beers. 405 Brewing Co. is doing sours. Elk Valley [Brewing Co.] has a saison.”

No matter how fancy the varieties on tap get, Jacobs said he’s focused on making the experience easy for everyone.

“We’ve got a small bar feel,” he said. “I want people to come in and feel comfortable. I want us to get to know the regulars. Get to know people and they’ll come back.”

He’s also hoping to draw in music lovers. The Root’s stage isn’t huge, but it’s big enough for anybody interested in playing to an intense crowd. Though TapHunter keeps beer updates rolling out to social media, Jacobs said he needs to do a better job keeping everyone in the know about the entertainment.

A website launching soon will help, but he’s also hoping word-of-mouth can bring in more audiences and performers.

“I want to give artists a place to play, a venue that’s small and intimate,” he said. “But we’re also doing things for them they won’t find every place.”

That includes Shelton running sound, working the lights and even providing a fog machine.

“I’m more about rap and hip-hop, personally,” Jacobs said. “But I’m trying to have something for everyone.”

Ideally, the bar will host live music three or four times a week, he said. He’s even playing with the idea of an open jam session on Thursdays, to give artists a chance to bounce ideas off one another and maybe create some new collaborations.

Jacobs said he’s not ruling out a kitchen inside The Root, but he’s not going to serve a sub-par menu just to have food available. Instead, he turned to one of Oklahoma City’s newest resources: the vast food truck community.

With a crowd that stays late, he said, the bar can offer food trucks a second or third daily location while also giving customers the sustenance they need to keep the party going.

And though he has taken it easy to start, Jacobs said he’s ramping up on beer-related events at the bar starting this month.

Thursday will be a birthday party for Missouri-based Boulevard Beer’s Tank 7 saison, including a birthday cake, free glassware and T-shirts.

On July 13, Texas brewery Rahr & Sons Brewing Company will do an event at The Root with four different beers and the Rahr Girls — “Whatever that means,” Jacobs said.

It might not be exactly what he pictured when he left his job more than a year ago, but if The Root keeps bringing more beer and more music to the Paseo, Jacobs and Shelton’s bar will have a lasting foundation.

Learn more about The Root at facebook.com/therootokc.