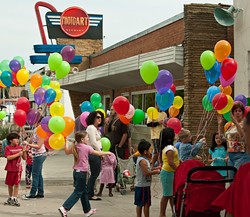 The 16th Street Plaza District is now old enough to operate a motor vehicle and, in most states, get married with the consent of an adult. All kidding aside, this is a big deal, and the Plaza District has every reason to celebrate. Just ten years ago, the area was a spotty business district with a few key businesses keeping it from falling into neglect. Sixteen years ago, it wasn’t necessarily somewhere you wanted to walk alone at night.

“We’ve been a nonprofit since 1997,” Kristin Vails, executive director of the Plaza District Association, said. “It [Plaza Fest] was just kind of a block party, and it was a lot of fun, but over the past three years, as the district has grown, the festival has taken off.”

These days, the Plaza is one of the most exciting districts around, and it’s still growing. It also has some of the city’s most popular restaurants and shops — we even did the research.

The neighborhood boasts a total of 15 mentions in the 2014 Best of OKC by Oklahoma Gazette. Gazette readers could not get enough of The Mule, 1630 N. Blackwelder Ave., and Pie Junkie, 1711 NW 16th St. Gazette readers are also rather fond of Bad Granny’s Bazaar, 1759 NW 16th St. And Empire Slice House, 1734 NW 16th St., has become the official late-night spot of pizza and tight jeans aficionados in OKC.

And where would we be if we didn’t mention the anchor that has kept the district from going to waste: Lyric Theatre at the Plaza?

The theater has brought some of the most incredible shows to Oklahoma City and boasts an impressive cast of alumni, including Megan Mullally and Kristin Chenoweth. The theater group will have a performance on the main stage across from the theater at 7 p.m.

“They normally preview an upcoming production, but this year, there might be some changes. We’ll have to see what’s in store,” Vails said.

There will be lots of other all-ages activities, including mural painting, an inflatable obstacle course and craft and art-education games. The family- friendly interactive section will be a free-for-all from noon until 6 p.m.

When the sun starts to set, the festival becomes more adult- oriented, with live entertainment and specials at area bars and restaurants. From noon to 9 p.m., there will be live entertainment from local acts culminating in back-to-back performances by headliners Sherree Chamberlain and Josh Sallee.

As always, the festival is pedestrian- oriented, with 16th Street blocked off to car traffic. Attendance has grown steadily every year, and Vails expects around 15,000 people to show up.

Parking can be a challenge because the Plaza District is surrounded by a residential neighborhood. However, the neighbors remain tolerant. It is celebrating their neighborhood, and it’s not every day that the city descends on the Plaza in these numbers.

“It [the festival] happens once a year. They’re pretty cool about it,” Vails said.

The best tip is to get there early in the day and, of course, be respectful. Most parking is on the residential streets around the district, and you might have to hike a little. It’ll be a beautiful day, and it’s worth it.

“The main thing that we want to stress is that it’s a completely local festival. We really keep the focus on the vendors and the musicians, and we only allow Oklahoma artists,” Vails said. 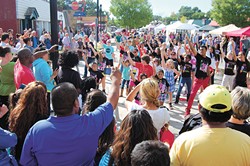 The art on display (and for sale) is curated by a committee of local artists and musicians from various backgrounds, from the artists themselves to those who work in galleries and sales.

The work of the festival itself, including leaving the Plaza shiny and clean for next year, is all done by volunteers. Vails stressed that they are still grateful for any volunteer labor. Anyone interested in donating time can find out more at plazadistrictfestival.com.