The Press is the latest restaurant from Mule, Anchor Down owners 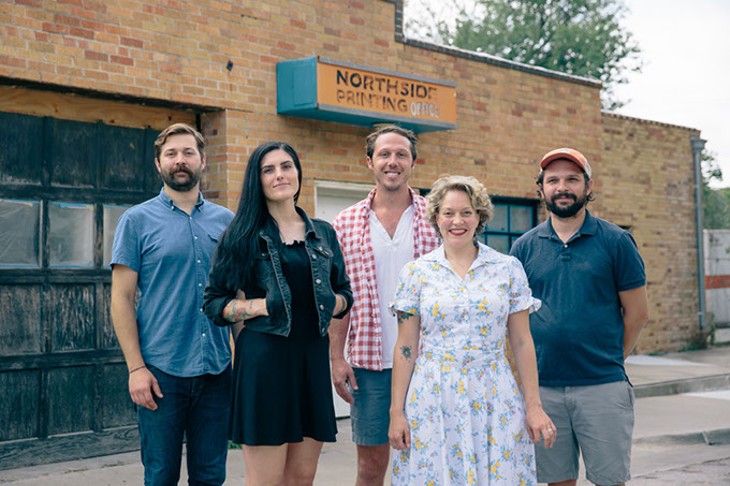 Long before friends Roger Eleftherakis, John Harris, Joey Morris and Cody Rowan opened their first restaurant, The Mule, the joke between college friends was that they should open a combination Pizza Hut and Taco Bell but have a bar and call it Hungry Town.

Started as a joke, Hungry Town Concepts is now the name of the friends’ successful restaurant group, which has expanded to include Deep Deuce’s Anchor Down and another Plaza District restaurant, The Press, located at 1610 N. Gatewood Ave., one block west of The Mule.

The arrival of The Mule signified the start of a change in the Plaza District. When it opened five years ago, Harris said, Saints was one of the few other restaurants in the neighborhood.

“The growth has been insane,” he said of the Plaza District, which is now home to 12 eateries. “We came in because of price, and we were looking for somewhere because we didn’t have a lot of money. Rent is three times as much now.”

The 4,400 square-foot building for The Press is more than twice as large as The Mule. It is a former garage and printing press, which serves as inspiration for the name. It is undergoing heavy renovation that includes ornate woodwork in the two main eating areas and sleek tile in the bathrooms.

The building’s history plays a role in design of the menu and interior of the restaurant, which will include photos of old cars and printing presses.

“The design pays homage to what the place was, and that’s the idea with the food too. It’s Oklahoma-style food,” said Jenna Lewis, who will serve as general manager for The Press.

The move to open The Press is a paradigm shift for the Hungry Town crew, what Harris referred to as their first “grown-up restaurant.” After starting with grilled cheese at The Mule and adding corn dogs at Anchor Down, The Press will serve traditional Oklahoma comfort food modeled after the state’s official dinner but also offer vegetarian options and craft cocktails.

Chef Beth Ann Lyon, who also consulted on the menu for its first two restaurants, reunites with the group to design the menu and train its staff.

“I’ve known them since they waited tables at The Wedge,” Lyon said. “It’s amazing to see their journey from opening their first place and finding success to where they are now, especially since they’re local. We’re so stoked about this menu.”

When it comes to devising a menu based on the official state dinner, which was ratified by the Legislature in 1988, it starts with a chicken-fried steak and chicken-fried chicken, Lyon said.

The Press puts its own spin on the chicken-fried steak by using high-quality rib-eye, which is hand-cut, pounded thin and marinated in buttermilk before being fried and topped with a buttermilk gravy Lyon said is “so thick you can build a house with it.”

Classically trained in French cooking, Lyon also is co-owner of Routed Connection, which offers yoga retreats around the world, where she prepares plant-based food and medicine for its guests. With the help of Lewis, she puts together vegan and vegetarian meals on The Press menu.

“There aren’t a lot of vegan options in Oklahoma, so I’m really excited that they’re going to let me have some grain bowls too,” Lyon said. “Everyone has dietary restrictions, so The Press will embody everything.”

The menu will have options and corresponding icons for those on carb-free paleo and keto diets or who are vegan or vegetarian. The latter will be available in both healthy (grain bowls and salads with fresh produce) and non-healthy options (Indian tacos with potato and beans or sweet potato fritters.)

“You can be vegan and eat Oreos; it doesn’t have to be low-calorie,” Lyon said.

The Press will be open seven days a week and serve brunch, lunch and dinner. The drink menu will cater toward beers on tap and herb-heavy cocktails designed by Lewis.

“Jenna is a scientist and doing some amazing tinctures and tonics for the bar,” Lyon said.

Lewis said the bar will have its own version of switchel, which is also called haymaker’s punch, that was very popular on Oklahoma farms. It will combine a mixture of citrus, chamomile, apple cider vinegar, maple syrup and ginger.

The Press is hoping to open in early October, which Lyon described as prime time for family-style meals as people come into town for the holidays. Harris and Lyon envision guests will be able to call in for reservations to order a large meal based on Oklahoma’s state dinner, which includes barbecue pork, biscuits, sausage gravy, fried okra, squash, cornbread, grits, corn, black-eyed peas, strawberries and pecan pie.

A truly Oklahoma-themed restaurant is how Hungry Town is giving back to the customers that have supported them, Harris said.

“The clients of Oklahoma City, I can’t thank them enough,” he said. “When we started at The Mule, we didn’t expect it to be so busy, and we had a lot of people be really patient. They waited outside for their sandwich for a long time and still thanked us when they left. The reception [for The Press] has been great, and people love seeing new stuff.”