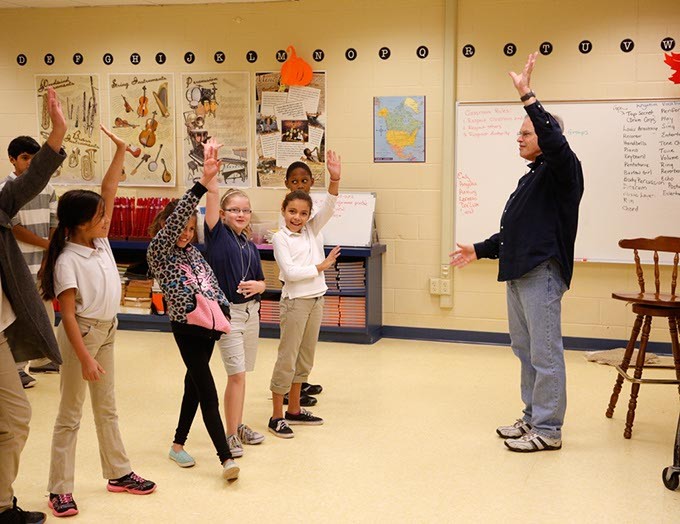 When music teacher Richard McDonald tells his choir students the next song to practice, there are cheers followed by some chitchat.

But the Bodine Elementary School teacher doesn’t mind talkativeness. His students are social, and they have meaningful things to say. After all, they select all the songs and choreograph the moves for the choir, comprised of fourth-, fifth- and sixth-graders with high marks in academics, attendance and behavior.

It was McDonald’s students who suggested the choir perform Mark Ronson’s pop hit “Uptown Funk.” McDonald found a kid-friendly version with only a few lyrics altered but the spunky tune intact. On a nippy November morning, as the popular, catchy music began, the educator told his students, “This is a party song. You can’t be sad at a party.”

They smiled, swayed and raised their hands as they sang the very lively repeated lyric, “Don’t believe me; just watch.”

That line is quickly becoming the southside school’s mantra after efforts jolted it from a culture of high suspension rates to a community school with a number of programs to improve academics, attendance, disciplinary actions and student pride. The changes aren’t limited to spreadsheet reports. Instead, they are visible when Principal Nikki Coshow walks the halls, which are decorated with student artwork and display messages of the schools’ learning environment. One reads, “Dear Student, I believe in you. I trust in you.”

Coshow greets students with hugs and meaningful conversations, which she didn’t see so much of her first year at the school. She started as an assistant principal during the 2012-13 academic year.

“This building has overcome so much,” Coshow said.

Tough doesn’t even begin to describe her first year with Bodine. As she recalled the challenges, her eyes began to fill with tears.

“It was beyond anything you could have ever imagined,” she said. “There were brutal fights every day.” 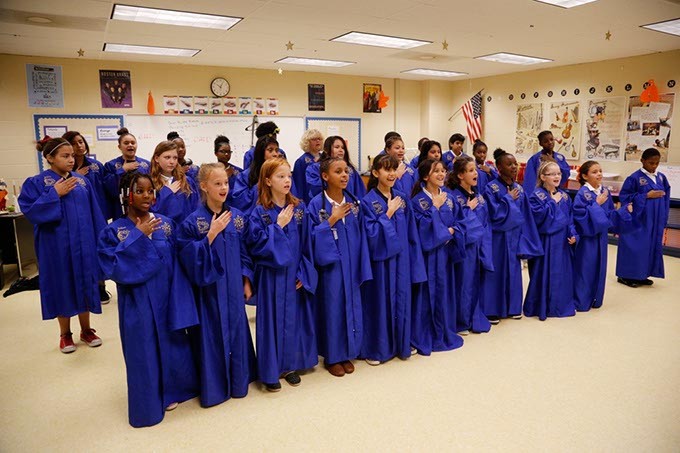 Bodine is a prekindergarten through sixth grade school in the Oklahoma City Public Schools district. Just five years ago, it was a very different school with a student suspension rate of 40.5 percent. Only Thelma R. Parks Elementary School held a higher student suspension rate at 42.1 percent. New safety measures, combined with administrators’ determination, began to transform the elementary school plagued by violence and bad behavior.

With the implementation of methods by The Quaglia Institute for Student Aspirations, a nonprofit organization that offers schools a framework for lifting student goals, Bodine’s transformation gained traction.

“We were turning Bodine around, but Quaglia helped us get it there,” said Coshow, who reported that the school has only had two discipline referrals this school year.

First, teachers surveyed students on their impressions of the schools and the roles of teachers. At Bodine, the results shocked school staff; however, the negative feedback was embraced as a stepping point highlighting the need to further change the learning climate. Teachers joined the effort, replicating a teamlike mentality and reading the book Student Voice: The Instrument of Change by Quaglia Institute founder Russell Quaglia and Michael Corso.

“It was a very inspiring framework,” Coshow said. “We’ve used other programs in the past, but this program allows our kids to be who they are. Because a student makes a mistake does not make them a bad child. That student just has a hill to climb and something to overcome to become successful. We don’t harp on those failures. We harp on the successes.”

The three guiding principles of the program are self-worth, engagement and purpose. The model calls for directly working with students by allowing them to actively engage in their learning and take responsibility for what they want their school to become. Pupils are encouraged to tell teachers exactly what they want, and they do so by creating proposals within their leadership teams.

Two years ago, the students at Bodine pushed for a school garden, which school leaders welcomed. Now, before classes start, Coshow sees students in the vegetable and fruit garden, tending to the plants and pulling weeds from the radishes, watermelons and cantaloupe plants. The youth recently nicknamed the garden “vegucation station” and expressed interest in creating an outdoor classroom nearby.

With regard to school safety, students desired to work closely with the school resource officer and, through their partnership, created the Paw Program. Similar to a junior officer program, pupils named it to match their school’s Bobcat mascot. Now, youth monitor their classrooms and hallways. When a student misbehaves, like running in the hallway or being rude to a classmate, monitors issue a warning or write a citation, which is later reviewed by teachers.

“I hear students tell other students, ‘That’s not who we are,’ when issuing warnings and citations,” Coshow explained.

Students also pushed for establishing a school store, one that would accept accelerated reader points as payment for bicycles, games, basketballs and more. When it came to rewarding students for perfect or near-perfect attendance, pupils requested a special treat of a snow cone vendor visiting their school. Not only do they order a frozen treat from the vendor, but students help pour on the flavors, explained fourth-graders Princess Oreu and Mary Eastman.

“You have to have a good and positive behavior to go,” explained Eastman, who is a member of the school’s leadership group, Q Team. “It is one of the ways we make the school a better place.”

Students suggested a partnership with neighbor Metro Technology Center. The tech school’s South Bryant Campus is a short walk from the elementary school. A select number of sixth-grade students visit the school for six weeks for welding lessons.

When it came to establishing after-school programs, the youth wanted Bodine to develop sports teams, scouts, a choir, a Bible study and a science group called Saturday Scientists, which meets to conduct experiments and take educational trips on Saturday mornings. Teachers stepped up to volunteer as coaches and advisors, which was followed by donations from the community. A police officer is the school’s basketball coach in addition to overseeing the Paws Program. Local company Devon Energy Corporation awarded the school a $25,000 grant to make the Saturday Scientists program a reality. Area businesses and organizations also donated choir robes, sports equipment and student achievement prizes.

Students have found greater meaning in their school experience thanks to the new influx of programs. The youth exhibit pride when they talk about their opportunities. They respect standards required in their classrooms.

The walls in McDonald’s music room are plastered with posters of well-known composers, instruments and inspirational messages, like “Dare to Dream.”

Like Coshow, McDonald began at the school four years ago. McDonald, who is a favorite among students, said it’s not the upbeat songs or off-campus performance opportunities that make students eager to audition for the honor choir. Instead, it’s the respect and love he offers each child. He, too, remembers when hallway hugs and high-fives were not a common sight.

As the honor choir students take off their newly donated bright blue robes, Coshow stands ready to help the them put the robes away and remarks on how well they are performing. At the same time, she watches and waits for the next suggestion from her students.

“Kids are an amazing force,” Coshow said. “When that force is going the right direction with quality leadership, it is hard to tell the kids no.”