The race for Oklahoma County Commission: District 1 is heating up

The last time there was an open seat for the District 1 Oklahoma Board of County Commissioners, four Democrats and two Republicans filed to run. After the dust settled on the special election primaries, Democrat Willa Johnson, a name in Oklahoma City politics since the early 1990s, moved on to face Republican Forrest Claunch, a former state representative. Johnson won a three-year term and was later re-elected to the seat in 2010 and 2014.

Johnson’s name will be absent from the 2018 ballot. The county’s first open seat commission contest since 2007 was spurred by Johnson’s decision to retire at the end of her term. While candidate filing is still two months away, qualified candidates are emerging. The roster of publicly announced candidates includes county health worker Carrie Blumert, former State Sen. Al McAffrey and Oklahoma City’s Ward 7 Councilman John Pettis. All three are Democrats. No Republican candidate has publicly mounted a campaign.

The Oklahoma County Commission races for 2018 will be ones to watch. In addition to District 1, District 3 Commissioner Ray Vaughn, a Republican, plans to retire at the end of his term. So far, Republicans Rick Buchanan, Vaughn’s chief deputy, and state Rep. Kevin Calvey have launched campaigns. District 2 Commissioner Brian Maughan is midway through his four-year term.

The candidates elected in District 1 and District 3 will not only be tasked with building and maintaining roads and county properties but will also play a role in much-needed reforms at the overcrowded and deteriorating Oklahoma County Jail, which remains under a Memorandum of Understanding with the U.S. Department of Justice. In addition, the commissioners oversee a great variety of services for all county residents, including voter registration, health and welfare programs and courts.

Commissioners earn a vote on the Oklahoma County Budget Board, which approves and oversees the annual fiscal year budget to cover the costs of county operations. The county currently operates under a $188 million annual budget with more than 1,700 employees. Commissioners earn about $110,000 in annual salary. 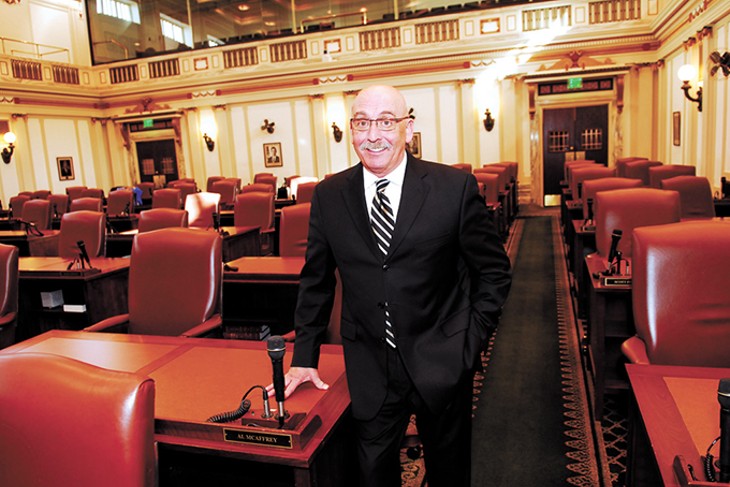 Months before Johnson announced her retirement, Blumert voiced her intention to seek the seat, raising money in May and beginning her door-to-door campaign in July. A Sally’s List-trained candidate, Blumert was drawn to the Oklahoma County Commission because of her desire to see criminal justice reform addressed at the county level. Blumert, who currently works at Oklahoma City-County Health Department directing the Wellness Now Coalition, explained if elected she would continue to bring a woman’s voice to county leadership and represent a younger and growing millennial generation in District 1.

“I had someone flat-out tell me, ‘You don’t look like a county commissioner because you are a lady,’” Blumert said. “I said, ‘You are right. I think that’s a good thing. I think we need more diversity in government with younger people running and more women.’ I used to take those comments offensively, but now that I’ve knocked 2,500 doors, I do not. I do feel strongly that I need to say something about diversity. We need to have leaders who better represent the district.”

While Blumert is a political newcomer, the two other candidates are not. Pettis is in his second term as an Oklahoma City Councilman representing northeast Oklahoma City. His campaign centers on his political experience and success spurring much-needed economic development in the urban areas of Ward 7.

“People have seen what we are attempting and what we are doing in northeast Oklahoma City, and they want that expanded,” said Pettis, who championed the Northeast Renaissance tax increment finance (TIF) district.

“We have some struggling areas of District 1,” Pettis said. “They need a county commissioner who can work with the municipalities, the City of Oklahoma City and the county to help transform those areas.”

Like Pettis, McAffrey also has experience representing some of the constituents of District 1. The former police officer turned small business owner was first elected to the Oklahoma House in 2006. Later, he served two terms as a state senator. More recently, he was the Democratic candidate for Oklahoma’s 5th Congressional District in 2016 and 2014.

“I believe my experience as a small Oklahoma business owner and my time served in the Oklahoma House and Senate make me a very qualified candidate for Oklahoma County Commissioner District 1,” McAffrey wrote in a Facebook post dated Jan. 16. “I have priceless experiences and knowledge from working with the lawmakers at our state Capitol and feel this will be particularly useful in trying to keep the funds allocated for our county.”

The issues addressed by Blumert, McAffrey and Pettis are standard fare for a county commission election: better roads, improved infrastructure, support for municipalities, expanding social services, leadership and, of course, the jail.

That’s the way Pettis sees the coalition as well.

“We have an issue when it comes to criminal justice reform,” Pettis said. “When we look at the population of those that are in jail, many of them cannot afford to be bailed out. I think the county is on the right track. I’ve been a strong advocate of this advisory council to look at the criminal justice system throughout the county.”

The primary election is June 26 with the general election slated for Nov. 6.