The Children Reading to Dogs program has been available at Metropolitan Library System (MLS) for over a decade, allowing children learning to read in a nonjudgmental setting to improve their skills.

It’s the kind of program a child might go to without even realizing its potential impact. Oklahoma City native Allison Miller, 12, was rummaging through an old box of items when she discovered a bracelet with the phrase “Tatum loves reading” that she thought she lost years ago.

Suddenly, the memories of being a second-grader at Stone Ridge Elementary School in Piedmont and meeting Tatum the Labradoodle at Belle Isle Library came flooding back.

“Tatum means the world to me,” Miller said. “The more I worked with Tatum and her owner, the more comfortable I felt attempting to read. Beforehand, I struggled in comprehending the academic work I was given. … I felt that more so when I was attempting to read. I felt like I was being judged by the teachers when I would attempt to read and mess up.”

For Christmas, Allison’s mother Diane reached out to Tatum’s owner, Carrie Caporal, who sent the family an up-to-date photo of the dog with Santa Claus. After Allison Miller found the bracelet, she began to talk about the fond memories of Petra Mather’s book Herbie’s Secret Santa.

Diane Miller found a copy of the book on Amazon and surprised Allison with it on Christmas.

“She was almost in tears when she found the bracelet,” Diane Miller said. “Her room is filled with books now. It’s amazing to see how far she’s come. She told me, ‘I didn’t realize it until now that the love of reading I have to this day is because of reading to Tatum since I felt comfortable reading to the dog instead of a person.’” 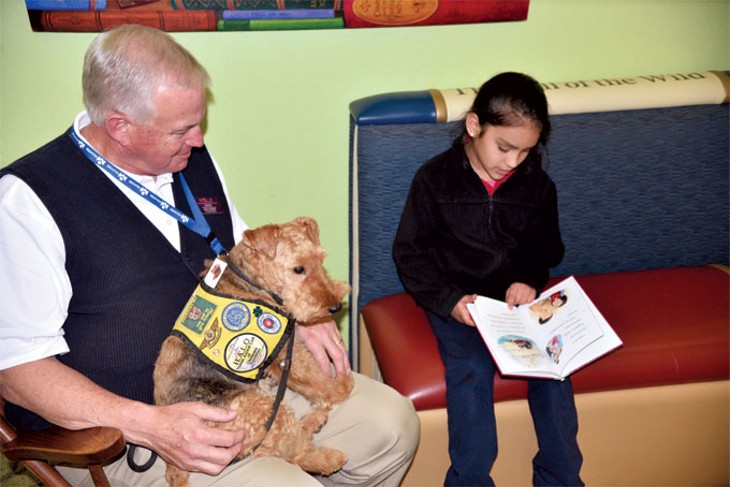 Charley the 11-year-old Airedale terrier, a certified therapy dog through Human Animal Link of Oklahoma Foundation (HALO) has been helping children read at The Village Library each Wednesday since 2009 with her owner Jerry Nickell.

It’s one of five programs the duo visits in their free time each week. Charley and Nickell also go to an assisted living home on Thursdays, Will Rogers World Airport on Saturdays and a heart hospital on Sundays.

The Village Library is the first place Charley visited after receiving his therapy dog certification, and Charley and Nickell have returned over the years, as Nickell views the program as a helping tool during a critical time for child development.

“It’s one of the unfortunate hardships of growing up, [that] for some of those kids who make mistakes, and their classmates laugh or make fun, they shrink into a shell,” Nickell said. “If they get behind in reading, they get behind in every subject. If the parents will get them here four or five weeks, it’s like they jump over a hurdle. Their confidence kicks in. We had a little girl last year, and her mom brought her every Wednesday for seven months, and she went up four grade levels in her reading skills.”

Nickell discovered HALO after Charley finished a successful career as a show dog. Looking for an outlet for Charley’s natural friendliness, he signed him up for a training program.

Compared to the more stringent training to become a service dog, which can take as long as two years, Nickell said, therapy dogs can pass for certification in a few months, depending on how quickly they adapt.

“Therapy dogs are trained for assisted living facilities or hospitals,” he said. “They can’t eat anything because medicine could be fatal; training keeps them safe. A service dog should never be petted because they’re working and it could distract them, but therapy dogs exist to be petted.”

Over the last few years, Nickell has noticed an uptick in the number of unlicensed therapy dogs, sometimes referred to as emotional support dogs, especially at airports.

Nickell said to be aware that online companies offer what looks like certification vests and cards for a fee but do not provide any actual obedience training.

“We had a dog at Will Rogers [World Airport] a month ago try to attack Charley,” he said. “No trained therapy dog would ever exhibit that kind of behavior.”

Only 19 states have fines in place for unlicensed therapy dogs, Nickell said, and Oklahoma is not among them.