The roaring electro-pop of Wildcat! Wildcat! is worth getting excited about 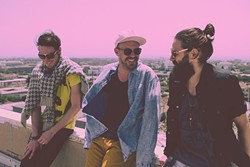 Formed in the heart of Los Angeles, surrounded by millions dreaming of fame and fortune, Wildcat! Wildcat! found its magic in giving up on that shared fantasy.

The three longtime friends Jesse Taylor (bass), Michael Wilson (keys) and Jesse Carmichael (drums) wasted years in other bands apart from each other, each project stalling out before ever finding any traction to speak of. The band was only designed to have fun, but a couple of buzzy singles — including standout “Mr. Quiche” — accelerated things in a way the buddies never anticipated.

“We had all been making music and trying to do big things doing it, but with this project, we honestly were getting away from the notion of being successful,” Wilson said. “It started there and then moved, unexpectedly, to this different place we are now.”

And that’s earning a livelihood from music, touring — including Saturday’s 8 p.m. show at The Conservatory, 8911 N. Western Ave. — and playing shows in support of the likes of alt-J and Passion Pit while releasing their debut album, No Moon At All, this year through Downtown Records (Cold War Kids, Miike Snow).

Ambiguity is fundamental to Wildcat! Wildcat!’s appeal, a smooth-riding but racing take at all corners of indie-rock territory: expansive, cinematic soundscapes; soaring, blippy anthems; blues-infected rock ballads; and all the crevices between.

“We gravitate towards being a bit of an elusive band as far as message and feeling,” Wilson said. “Our songs can sound kind of happy and then switch over and sound sad, mysterious or dark. As best we can, we’d like to try and be a little bit of everything.”

The band’s dynamic, namely the unilateral approach to songwriting, lends itself to that.

“We can feel comfortable in the uncomfortable nature of it,” Wilson said. “There’s no formula. There’s nobody in charge. We mix and match and everyone finds their place in each song. It’s challenging as an artist, but that’s a big part of the evolution of the artist.”

If their 2013, self-titled EP fit neatly in the emotionally wrought electronic pop of Foster the People or Passion Pit, its higher minded follow-up, No Moon at All, plays as a fully conceived narrative, embracing that easy feel for disarming hooks with fully panoramic production and sleek interstitials, guided by producer Morgan Kibby (M83 keyboardist and co-writer for mega hits “Midnight City,” “Reunion” and “Kim & Jessie”).

“We’re all pretty adventurous when it comes to making stuff,” Wilson said. “It’s definitely different, for better or for worse, but it’s nice to be in a project where people aren’t afraid to make changes or take risks. It’s essential to growth.”

Growth is the goal, though the band is hesitant to strive for a rapid takeoff, more in favor of a slow burn guided by the work ethic — and ceaseless reinvention and redefinition — of former tourmates Portugal. The Man.

2015 will likely allow for a few opportunities for that quiet cultivation and spiritual shift. Between still-to-be-confirmed prospects of scoring a film and touring Europe, Wildcat! Wildcat! already hopes to dive back into recording the songs it’s been working on since wrapping No Moon at All, with little indication of the direction it will head short of being somewhere new and exciting.

“We aren’t worried about fitting in,” Wilson said. “It’s just about feeling right.”