The Ruins Bar & Grille is the latest addition to The Sanctuary OKC, which combines haunted fun and escape rooms 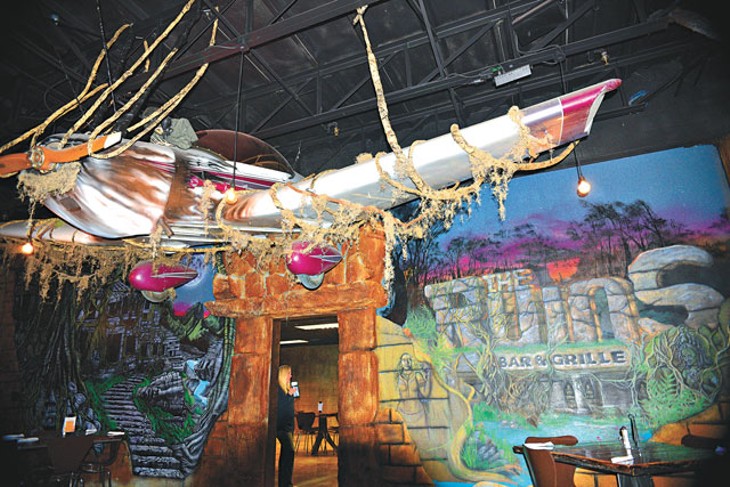 From the outside The Ruins Bar & Grille at 12101 N. Interstate 35 Service Road, just north of Frontier City amusement park, it’s pretty clear that it isn’t your average neighborhood watering hole with its ominous façade inspired by the Cambodian ruins of Angkor Wat.

Walk inside and it’s even clearer that the entire 35,000 square foot complex might be unlike anything else in the state. Owners Tino and Cathleen Pascuzzi said it’s a family entertainment center where bar and grill turns into a concert venue, two state-of-the-art escape rooms and a seasonal haunted attraction all under one roof.

The Ruins Bar & Grille opened at the beginning of November, but the building has been in use by the Pascuzzis as home to their popular haunted attraction The Sanctuary OKC, which began in 2011 in a four-story building behind Chesapeake Energy Arena, for the last two years.

Tino and Cathleen Pascuzzi met in Los Angeles on the set of Melrose Place while pursing acting careers. Once they got married, acting took a backseat to raising a family. Tino opened a personal training business that eventually led him to developing an audio-visual installation company.

When the economy crashed in 2009, personal referrals began to dry up. The Pascuzzis’ neighbor in Los Angeles just happened to be from Edmond, where his father was in need of an electrician after purchasing a company that worked with assisted living facilities across the region. The Pascuzzis moved to Oklahoma in 2010.

“We were only going to be here for a year and fell in love with Oklahoma,” Tino Pascuzzi said. “Edmond is an amazing place to raise children, and everything fell into place. We set up roots here.”

The family was close to opening a haunted attraction in Los Angeles before the deal fell apart in the final stages. The Pascuzzis had a variety of friends in the entertainment industry, including premiere makeup company Cinema Secrets, which helped them throw elaborate Halloween parties.

Eventually, a designer asked if they’d consider opening a haunted attraction in Oklahoma, and before they knew it, they were signing a lease to open The Sanctuary in a 55,000 square foot building downtown off S. Broadway Avenue.

Business at The Sanctuary took off in its second year, tripling, and doubling again in its third year, but that also led to congestion issues, which limited customer turnover.

“People would still stand in it, which is crazy but a testament to what we built. I would never stand in a four-hour line,” Pascuzzi said.

One of those die-hard fans was Louie Hernandez, who said he’d been to a few haunted attractions and they were always the same — a hodgepodge of Freddy Krueger and some clowns — until he went to The Sanctuary.

“I was blown away by the story and set design,” Hernandez said, adding that he pestered The Sanctuary’s Facebook account for a chance to work until Pascuzzi replied.

He was hired as an actor for a season and moved his way up to being in charge of building sets and running the escape rooms.

The haunted attractions, which also have Christmas and Valentine’s Day themes, are a seasonal business. When the Pascuzzis moved The Sanctuary to its current location — a building constructed by General Motors in the 1950s, complete with showroom and industrial kitchen — they wanted to add escape rooms as a way to attract people year-round.

The popularity of escape rooms has boomed in the last half decade. Most are centered around the same premise: A group has 60 minutes to figure out puzzles and find clues to get out of a locked room.

“Most of them are plain office room settings, Pascuzzi said. “We’ve taken it to another level. As soon as you step foot through the door, it becomes an adventure where you’re living and breathing the environment.” 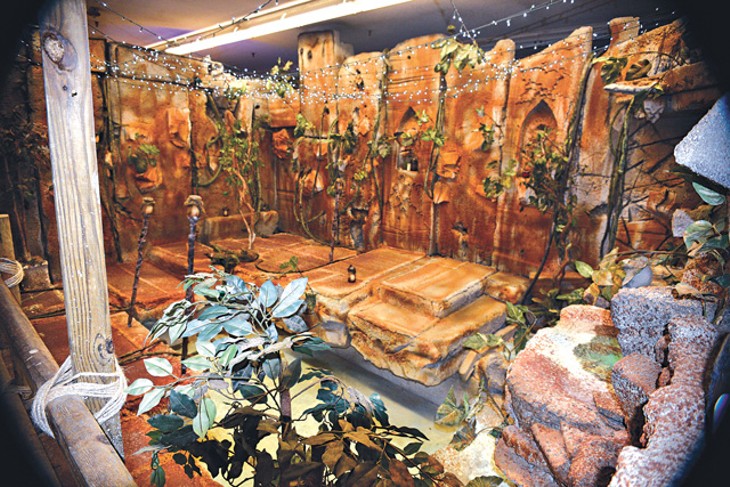 “People walk in here and are completely caught off guard because their senses are automatically hit. They smell cedar, hear gravel crunching under your feet and see everything on the wall,” Hernandez said inside the opening room of The Lost Dutchman’s Mine.

The first room of the La Famiglia set takes place in a deli that is so committed to authenticity that Pascuzzi and Hernandez drove to Krebs to buy meats and cheeses.

The most recent addition to the property is The Ruins Bar & Grille, which opened at the beginning of November. The aesthetic is inspired by Indiana Jones and the Angkor Wat ruins, complete with fake bones in the bar, and is connected to 500-person capacity auditorium called Ruins Live!, which hosted its first concert at the end of November.

The Ruins Bar & Grille features seasonal cocktails and local beer. The restaurant is open at lunch and dinner with a variety of sandwiches, entrees, pasta and tacos.

Operating a full-service bar, escape rooms and seasonal haunted attractions under one roof might seem like too much to handle, but not for the Pascuzzis and Hernandez, who has the Walt Disney quote “It’s fun to do the impossible” tattooed on his arm.

“We want to give people that wow factor,” Pascuzzi said.

Print headline: Wow factor; The Ruins Bar & Grille is the latest addition to The Sanctuary OKC, which combines haunted fun and escape rooms.