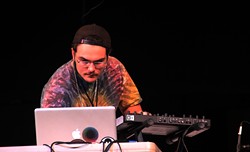 Isolation is a feeling most electronic artists are familiar with. It comes with the territory, a largely introverted set who spend many sleepless nights holed up in a bedroom in a state of half-delirium, plugging away at their computers and devoted to pushing their art to the farthest reaches they can. When they play, they tend to step on stage alone, and they leave the same way.

Many revel in it, being alone with their thoughts and their work. “Addictive” is the word Ethan Strange and Skyler Schröder — who make music as Celadon City and Boare, respectively — use to describe the process, an obsessive one for anyone who cares to delve into it. It’s easy to get lost in that rush, a body-high of creating from such a primal, innate headspace, a world evolved from the control of your fingertips.

But eventually comes the moment to share in hopes of evoking a similar wave of rapture within someone else. That’s where half the joy comes from.

And for the longest time, artists like Strange and Schröder didn’t feel like there was anyone there to share with. No one who listened. No one who cared. No one who knew that they even existed.

All of a sudden, that self-prescribed isolation that was so comforting and so essential starts to crumble into a choking, shrinking sense of loneliness.

“When I started, it was like, ‘How do I play shows? How do I get people to listen to what I am doing? Who does electronic music around here?’” Strange said. “I didn’t know a single person to turn to.”

Birds of a different feather

There’s a healthy and growing EDM scene in Oklahoma, to be sure, one that mirrors a national popularity that has (seemingly) yet to peak. Electronic music is a broader umbrella than it has ever been, one just as vast as any other genre. And the EDM ethos — both on a national and local scope — is different from what Celadon City, Boare and their growing set of friends and fellow artists known as the Safari Collective are doing. Not better or worse, necessarily, but different — their left-of-center sensibilities carved from Flying Lotus, Aphex Twin, Tycho and the like don’t always jive with the bass-craving, hook-loving club crowd.

After working independently — and without awareness of each other— for a few years, Strange, Schröder and Ben Hill (known as Askanse) finally began to bump into each other about a year ago through house parties and friends of friends.

But the few entry points there were into the Oklahoma music scene as an electronic artist were plugged up. So the small, fledgling group thought, “To hell with it. If there’s no platform to be heard from, let’s make our own.”

“If you’re outside the boundary of the norm, then you really have a hard time connecting with people and trying to get yourself out there,” Schröder said. “I really feel like with this community that we’re building we have more of an opportunity to showcase all of our works, and we’ll revel in the diversity. It’s all about family.”

The idea for a collective was sparked from Strange’s experiences. He found support from strangers thousands of miles apart through national electronic artist communities and labels before finding much of the same in Oklahoma.

“It led away from the feeling of being by myself,” Strange said.

And that sense of belonging was something that Strange wanted more artists like him to be able to feel in their home state. Thus came Safari Collective, a group created to bring artists together and out in front of people who would like to listen.

“Once I started figuring out there were artists out there who wanted to take that extra step, it was like, ‘Let’s make it fucking happen,’” Strange said.

In a few weeks, Safari Collective went from an idea to a reality, amassing 11 artists who run the gamut of chillwave, ambient, Chiptune, drum and bass and hip-hop-leaning producers, few of whom knew each other even 12 months ago — artists like Celadon City, Boare, Askanse, kanon_kid, PVLMS, Sardashhh, DBOYD, Airglow, Akiba, Schotty and Home Shopping. 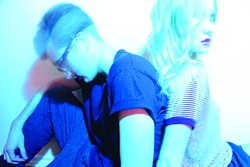 Like an exotic island of misfit toys, they all differ in style but are bonded by proximity and an enthusiasm for moving forward, both individually and as a group.

“Safari represents an exploration of sound. It has to do with discovery and evolution,” Strange said. “I wanted the collective to be a gateway for change.”

Lexi Sacco and Frank Stevens of duo PVLMS — who just released an EP, Compassion — came to Oklahoma from Texas for college. But like fish out of water, they didn’t even know where to start, not only in terms of spreading their music at a local level but how to connect with it, even at a fan level.

“We wanted to bring some of the experimental vibes that can be heard in places like Austin, LA and NY to Norman. Right when we thought Oklahoma wasn’t going to have anyone else like us, [Strange] messaged us about Safari Collective,” Sacco said. “We immediately joined and were stoked to meet other young producers in the area.”

For others, it has been a shove out of the bedroom and in front of their peers or a crowd, as it was for Maxwell Moore, one half the punk-rock duo Cosmostanza who moonlights as kanon_kid, a project he didn’t expect to move forward with until midway through 2015. Moore released his debut, Dormant Dreams, in October.

I would have never done before,” Moore said. “I feel often alone in Oklahoma; it’s an area I don’t truly feel comfortable in, and the music scene has become my favorite thing about it.”

But if Safari Collective is winning on the front of creating a safe place for misfit producers, it’s still facing an uphill battle in bringing that into the public eye. DIY Norman art space Dope Chapel has become a vital, unofficial temple for the crew, but it’s still a struggle to find new rooms to embrace their music.

“In Oklahoma, it’s tougher,” Strange said. “As far as artists that don’t represent the club scene, there’s not many places for them yet. The community hasn’t matured enough yet.”

“No shit it’s hard to get shows,” Schröder continued. “Sometimes you think no one cares, but with this, it’s easier to have that self-confidence because we are all here and all growing.”

2015 will demand as much energy dedicated to furthering the group’s cause, their own individual interests and projects. But the hungry base — one that is happy to accept new members — is invigorated by the chance to find a seat at the table.

“We all play a part. If the idea of the community is there, it pushes everyone forward and encourages the scene,” Strange said. “It’s more than a career; it’s a lifestyle. And I’m ready for everyone to be part of it.”