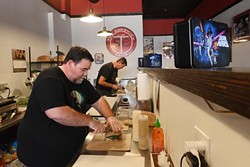 Oklahoma City resurrects the Earl of Sandwich’s greatest invention with the help of Alan Grande and Isaac Barton, owners of The Sandwich Club, 3703 N. Western Ave.

The entire restaurant is a delightful homage to the 1980s, with Mario, Space Invaders and TV show and movie posters adorning the walls and a menu straight out of a John Hughes film.

There are no hoagies or ciabatta loaves here. The Sandwich Club deals in sliced bread. The choices are white, wheat, jalapeño cornbread and German rye — more than a match for any filling.

“Can’t I make a sandwich on sliced bread at home?” Well, yeah. But if your fridge holds half the ingredients used in sandwiches at this restaurant, you probably eat sandwiches for breakfast, lunch and dinner.

I prefer to let the experts make mine with fresh deli meats, vegetables and sauces I rarely have on hand.

Take the After School Special ($8.50), for instance. What kind of demented genius thinks to put pastrami and turkey together with jalapeños, jalapeño chips, hot sauce and horseradish? Toss in some cheddar and the sweet zing of honey mustard and a mélange of flavors takes taste buds by storm. 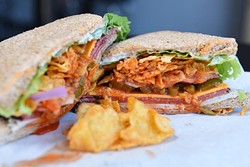 One thing The Sandwich Club does masterfully is play with textures. Often, sandwiches on sliced bread get a bad rap for being dull, but jalapeño chips give After School Special a new dimension.

The eatery uses locally made Big Sky Bread, which has more body and flavor than run-of-the-mill supermarket loaves. The crunch of chips beneath the solid chew of bread and crisp bite of vegetables makes this sandwich a feast for the stomach and the senses.

Bababooey ($7), an Italian masterpiece that is heavy on the meat, is a little simpler.

Look; turkey breast is a fine sandwich meat, and ham is dandy. But sometimes hungry people need something with a bit more bite. They need to order a Bababooey with the spicy, fatty punch of pastrami, salami and mortadella. Deli mustard and mayo ease the way for a trio of meats that are as tasty as they are deadly.

There is no duck in the Long Duk Dong ($8.50), but there is red pepper hummus, a spread that should join ketchup, mustard and mayo in the condiment hall of fame (which is probably in Cleveland). Turkey gives the sandwich its meaty base, and bacon adds crunch and smoke. Provolone is there. But the red pepper hummus makes fans yell, “Oh, sexy American girlfriend!” at their sandwhiches. 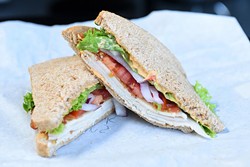 Maybe it’s the strong association I feel with nerds, but my favorite concoction at The Sandwich Club is Omega Mu ($9.50).

Forget those snobby Pi Delta Pis; to fuel up to best the Alpha Betas, turn to the roast beef and bacon-laden Omega Mu. Cheddar provides a bit of sharpness, and horseradish and Sriracha put this over the top.

For anyone who didn’t obsessively watch Revenge of the Nerds as a young adult, this is just a really great sandwich. Horseradish and roast beef are a classic pairing, and the Sriracha adds floral heat that gives every bite a sense of momentum.

Cousin Eddie ($8) is like an Omega Mu, but with provolone in place of cheddar and steak sauce instead of Sriracha. It is a delightful substitution if the sweet burn of chili is too much to handle.

The Swamp Thing ($7.50) is a tuna salad sandwich that has been hit-and-miss for me. Last time, the tuna was a little dry for my tastes. But the mix of pepper jack cheese, jalapeños and Cajun mayo on jalapeño cornbread is usually amazing. Not everybody likes tuna sandwiches, but the soft sliced bread used at The Sandwich Club is a perfect staging ground for this slightly sloppy mouthful.

Finally, there is Snake Plissken ($8.50), named for the hero of Escape from New York played by generally delicious Kurt Russell. I’m not 100 percent sure, but I think this one got its name because diners have to unhinge their jaws to eat it. 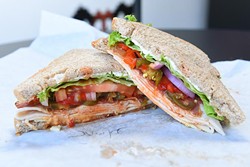 There’s also a kids menu that anyone can order from. A My Little Rainbow Strawberry Bears ($5.50) is essentially an un-fried Monte Cristo with ham, turkey, Swiss and strawberry preserves.

The little touches at The Sandwich Club are some of the best. All sandwiches come with a bag of chips. The Trapper Keeper on the counter and the neon menu are perfect, and the Jolly Ranchers that come with each sandwich make the day.

That attention to detail — plus the friendly service and the delicious sandwiches — are the reason so many people keep hopping in their DeLoreans and heading back to The Sandwich Club.

What works: Omega Mu and After School Special will rock you like a hurricane.

Tip: As fall returns, so too will the restaurant’s cold weather-curing soup.