If you want your latte steamed steampunk-style, The Screen Door, 408 W. Main St., in Norman is the place to be. Goggles are optional.

Owner Bridgett Hefner has big dreams for her shop, which opened earlier this month. Over the course of a weekend, in between supply runs and the mad scramble that precedes the grand opening of any business, Hefner spilled the beans.

“I’ve always had an interest in philosophy and had considered doing a series of lectures on my interests in souls, dreams and sleep,” Hefner said. “I was talking with some friends, who said, basically, if you want to attract people who like to talk about philosophy, you should open a coffee shop.”

“Our coffee is organic, our food is organic and locally grown when possible, all of our paper products are biodegradable and we will donate a portion of each week’s earnings to charity,” she said. “We are also highlighting a different group each week who will receive 20 percent off of a meal when they come in.”

Hefner and her staff also put together an ambitious schedule of events — some for kids and families, like tea parties, and some in the evening for adults.

Aug. 25 is The Roaring ’20s event featuring dancing, cocktails, food and music from the 1920s. Dance and costume contests round out the evening, and in keeping with The Screen Door’s philosophy, part of the night’s proceeds will go to charity. Tickets are $25 at thescreendoorok.com. 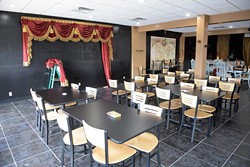 “My playlist from the 1920s has too many great songs to choose from. My favorite overall artist from the 1920s is Louis Armstrong, and my favorite song, of many, is ‘Boogie Woogie’ by Pinetop Smith,” Hefner said. “When I think of a screen door, it says, ‘everyone’s welcome.’ Everyone is accepted and welcome when the screen door is open; you can come right in and enjoy yourself.”

Hefner said she has liked steampunk since she was a teenager.

“It’s a style of roughly the 1880s to the 1920s. My wedding was in that theme as well. We have a big octopus on the wall, a blimp and three hot air balloons, although two of the balloons aren’t finished yet.”

As her business gets its sea legs, Hefner plans to keep things fresh, adding events like craft beer nights and monthly suppers.

Print headline: Brewing dreams, A Norman entrepreneur turns her enthusiasm for conversation and steampunk into a coffee shop.