The Secret Life of Pets keeps off the leash 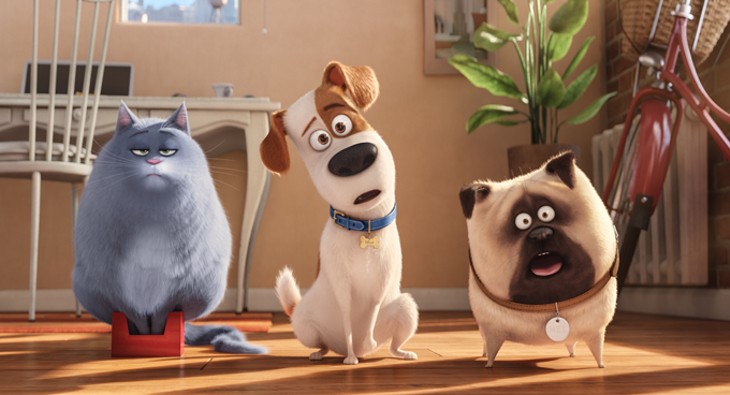 Coming a few months after Disney’s sublime and timely Zootopia, Illumination Entertainment’s The Secret Life of Pets offers an urban animals film without the weight of ambition or social relevance. That sounds snarky; after all, there’s room in the world of computer-generated animation for both disarmingly sophisticated entertainment and fizzy, fuzzy amusements. In this case, Pets contains an appropriately generous amount of fuzz, and the fizz is off-the-charts carbonated with extra corn syrup.

Pets begins with a candy-hued establishing shot of New York City accompanied by, of course, Taylor Swift’s “Welcome to New York.” This is where Max (voiced by Louis C.K.) lives; he’s a short-haired terrier residing in a high-rise apartment with his owner Katie (Ellie Kemper). Max enjoys the good life, and when Katie and the other humans go to work, all the animals in the building begin their extended social hour. These include Gidget (Jenny Slate), a pampered and loquacious purse dog nursing a crush on Max, and Chloe (Lake Bell), a languid and distractible gray cat. 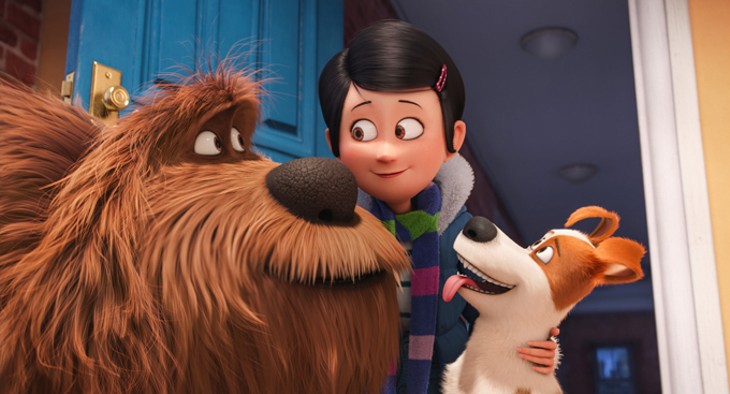 But this cushy paradise gets bum-rushed by Duke (Eric Stonestreet), a wooly mongrel that Katie rescues from the pound. He immediately upsets the balance in Max’s world. Duke’s overbearing nature and a mishap at a dog park result in a manic journey through Manhattan and Brooklyn as the new duo must fend off aggressive dogcatchers and a battalion of street animals led by Snowball (Kevin Hart), a former magician’s rabbit with an axe to grind over house pets.

Everyone wonders what their pets do when no one is there to see them, and the opening scenes of The Secret Life of Pets promise a kind of Seinfeldian ideal in which all the furry and feathered neighbors check in on one another and banter about nothing and everything. But director Chris Renaud and writer Ken Daurio, the team behind the Despicable Me films, abruptly change the game by sending the animals on a zany, madcap adventure through sewers, trapezelike clotheslines, window-washing platforms and oncoming traffic. Pets seems to constantly operate under the assumption that 6-year-olds in the target market will march out of the theater en masse if action ever takes a backseat to story.

That could be a canny strategy to distract from the fact that The Secret Life of Pets lifts liberally from Toy Story, and not just the idea that domestic animals, like children’s toys, can talk  when no humans are watching. It’s there in the dynamic between Max and Duke, which mirrors the competition between Woody and Buzz Lightyear, but it’s also there in the chase scenes and the need to restore order before the humans come back around. No other animated film of the modern era has cribbed from it so conspicuously.

Qualms aside, The Secret Life of Pets scores points with its fine use of voice talent, and while Louis C.K. plays wildly against type as upbeat and upstanding Max, the performance is proof of the comic genius’ flexibility. Without question, the standout performance belongs to Hart, who plays Snowball like an unhinged gang leader, rallying the hordes at one moment and comically wailing and giving a chest-pounding salute to a fallen compatriot the next. Plenty of other great players — including Hannibal Buress, Albert Brooks and Steve Coogan — lend their voices.

Other studios tend to aim high (Disney/Pixar) or at the lowest common denominator (I’m looking at you, Sony Pictures Imageworks), but Universal’s Illumination Entertainment deftly targets the middle and racks up impressive commercial successes by doing so. This rarely results in the kind of film that unites parents and children in equal admiration, but while The Secret Life of Pets will underwhelm most adults, it won’t leave them twitchy and craving a dark, quiet room the way Minions did.