“They are very influential in our Saturday business,” he said. “I didn’t realize that when I first bought the place, but the employees very quickly told me we had to get them back. They were only gone probably a couple of weeks.” 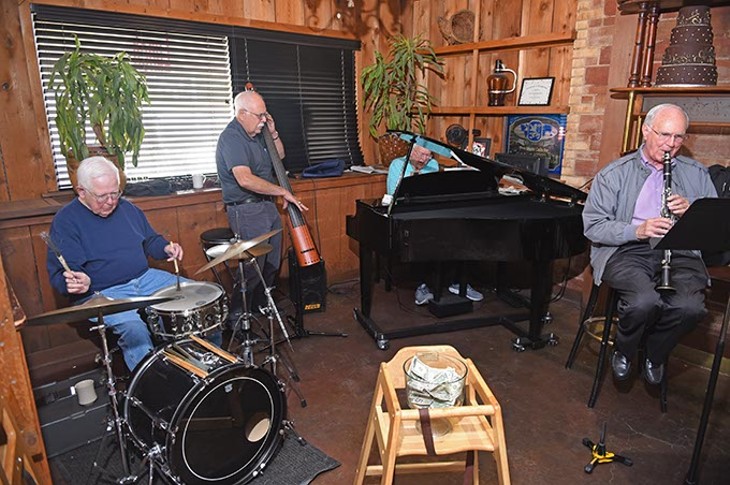 The Silvertops have not been at Ingrid’s Kitchen, 3701 N. Youngs Blvd., every Saturday for 25 years. But only because owner Lee Burrus didn’t realize what he had when he purchased the European bakery and restaurant 15 years ago.

“They are very influential in our Saturday business,” he said. “I didn’t realize that when I first bought the place, but the employees very quickly told me we had to get them back. They were only gone probably a couple of weeks.”

Burrus soon realized that while the meatloaf, weinerschnitzel and decadent European pastries keep the crowds fed, the music and dancing was what drew them in on Saturdays.

Formed by the late Curly Cardinal, The Silvertops play music of the 1920s, ’30s and ’40s as a mostly older crowd gets on the dance floor and cuts loose.

“Watching them out there is one reason I still want to play,” said Sid Goodman, the drummer and the band’s only original member. “This is their environment.”

The comforting tunes of Glenn Miller, Tommy Dorsey and Frank Sinatra are like a musical fountain of youth, Goodman said. Seeing them dance invigorates the band, as well.

“I look forward to this every week,” Goodman said. 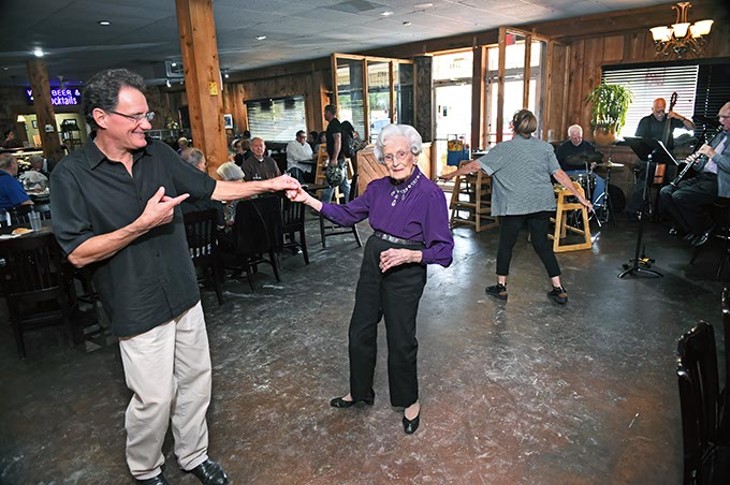 Pianist Gary Johnson took over as bandleader in 2007 when Cardinal died and works with Goodman and bass player Don Munday to prepare a setlist each week. Jerry Smith and Earl Hefley are on horns, rounding out the arrangement.

Working together for so long gives band members a trust in one another that shows on stage. Flowing from one song to the next, it’s almost as if they can read each other’s minds.

It wasn’t always that way, Goodman said. In his earlier years, he was a trombonist, and not a good one.

“The bandleader said, ‘How would you like to play bass drum?’” he said. “Luckily for me, one of the teachers was the principal percussionist for St. Louis Orchestra.”

In addition to their musical repertoire, The Silvertops also have built up a cache of stories about current and past band members. The man who started it all is still a frequent topic of fun.

“Curly was a ladies’ man,” Johnson said. “He had several girlfriends ... none of which knew about the others. In the middle of a set, he would wave from stage and they’d all wave back.”

Though Cardinal’s girls might have taken up some of the space, the rest of the band’s popularity has kept the crowds coming in long after he left. Johnson said it’s a good relationship all around. They get to play the music they love, see people dancing and enjoying their tunes and the restaurant sees a packed house hungry for a good time and a good lunch from noon to 2 p.m. every Saturday.

Just as Cardinal always did at the end of every show, The Silvertops still play “Smile.” For the men and women who still love to shake it on the dance floor to the hits of yesteryear, that’s exactly what they’re doing anyway.

Print headline: Chart toppers, For 25 years, The Silvertops have been packing the dance floor at Ingrid’s Kitchen.