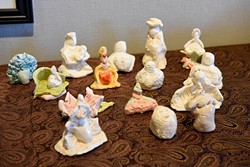 The women gathered, chattering and laughing. They eventually seated themselves in folding chairs arranged in a circle in the middle of the gallery, which was in a state of barely organized chaos. Paintings were propped against most of the chairs, the walls and the glass jewelry case, which had also been temporarily moved to the middle of the room.

Oklahoma City’s Studio Gallery, 2646 W. Britton Road, celebrated its 25th anniversary in April. Its members were in the process of hanging its 2016 Spring Show, which is now open and runs through October.

“We are Oklahoma City’s longest-operating co-op gallery, and that sets us apart,” said Beth Hammack, a 10-year member and oil/acrylic painter.

Artists are voted in, and each pays a portion of the studio’s expenses and works shifts during its business hours.

“Most of us use that time to paint, and most of us find it helpful to have scheduled hours set aside to paint. It does surprise people when they come in to realize this is a working gallery,” Hammack said.

Like most of her fellow artists, Hammack had a different career before pursuing art full-time.

The work is good and ranges in style from very modern/abstract to more traditional still life. Jane White, whose mother was artist Ellen Covington, a founding member of the gallery, said she is inspired by whatever pops into her head. A couple of months ago, it was a vacation to Greece.

White’s painting career began when her mother bought her art lessons for her 40th birthday.

There are common threads in the members’ stories. Each of the women fell in love with painting and the arts early in their lives and found that there were eras in life when painting had to take a back seat to things like raising children or other, more lucrative careers. But in each of them, art waited patiently for the moment it could come roaring back.

As the women took turns sharing their histories as artists, another common theme emerged: mothers. Mary Lee Smiser, one of the gallery’s founders, began painting as a young girl and, thanks to her mother, took lessons from revered Oklahoma City artist Richard Goetz.

“That’s how I started, and I got hooked really fast,” she said.

Smiser painted through college but did not major in art because it wasn’t something people did then. Instead, she majored in education and taught elementary school.

“I enjoyed teaching, and I was a good teacher,” she said. “I also drew pictures all over all the chalkboards.”

Hammack’s mother is also an artist who took her third-grade daughter to lessons at The Art Institute of Chicago, and as Hammack puts it, “It stuck.” Her work is very large-scale and abstract.

Though she said she didn’t paint for almost 30 years, she did lots of other things, including running a charm school, doing marketing for the John A. Brown department store in OKC and launching her own jewelry line. She is the only gallery member who is also represented by another gallery, JRB Art at the Elms in the Paseo Arts District.

Phebe Kallstrom is a six-year gallery member and the group’s only member whose entire career has been in art. Her mother was a watercolor artist who went to Pratt School of Design. Kallstrom took lessons at the Cleveland Museum of Art and taught art for 31 years for Edmond Public Schools.

“Art is just in my genes. After I’d been retired for a year or two, I went to Jane (White) and said ‘What do you guys do in there?’” Kallstrom said. “I started taking lessons at the gallery, and that was it.”

Kallstrom’s artistic muses are aquatic. She is smitten with fish.

“I also did a series on water and reflection,” she said. “I roll with one thing and then another. My work always includes an element of whimsy.”

Pat Edwards, who at 80 is one of the elder stateswomen of the group, has been a part of the studio for 25 years and is its president. She’s from Fort Lauderdale, Florida, where she said the beach was her painting school. Her art education has come largely from traveling the world, paying special attention to Europe and visiting the best museums in each country.

“I love art history as much as I love painting,” Edwards said. “I’ve been fortunate to have painted with wonderful artists in the DC area, like Rick McClure.”

Her award-winning work is, for her, a logical extension of her career as an interior designer. 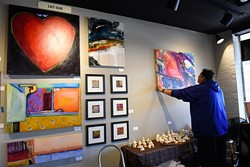 Edwards’ management style works so well for the rest of the members that she has been designated the permanent, indefinite president.

“My philosophy is to keep things extremely simple so we can all paint as much as possible,” she said.

There are two members who venture into three-dimensional work: jewelry designer Whitney Ingram and ceramicist and painter Lacy Saak. There are two other members who’ve broken the typical Studio Gallery mold in a very different way — they are men.

“Dodge Hill was our first male. His wife Lori was worried about what he would do when he retired, so I said, ‘Well, let’s get him to join our group,’” Hammack said.

The Studio Gallery hosts two parties each year, one in the spring and one in the fall, and they are much-anticipated.

“Because we only do two shows each year, they are packed literally elbow to elbow,” Hammack said.

The spring show will be up through October, at which point the fall show will go up and the venue holds its second bash of the year. Gallery hours are 11 a.m.-3 p.m. Tuesday-Saturday or by appointment.