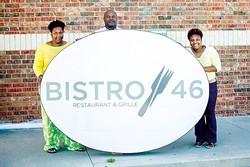 Drive down NE 23rd Street and see the line of people waiting to get into Bistro 46 and you might think it is the hottest nightclub in the city.

Well, it can be when it closes for private events on Saturday nights, but this is Sunday at noon as people in their church clothes vie for a spot for one of the best deals in town: the soul food buffet (2 for $22).

Inspired by Buttons in Fort Worth, the Beechums envisioned Bistro 46 as a supper club and large event space. They settled on the name because “bistro” described the atmosphere they wanted and “46” because Oklahoma was the 46th state admitted to the union.

Bistro 46 started with a Sunday soul food buffet, expanded to end-of-the-week lunch specials in 2016 and added a Friday seafood buffet in November 2017. The Beechums took flyers for the Sunday buffet to church services, plastered car windows with them and built a following through word of mouth.

“It’s been growing and growing,” Tori Beechum said. “It’s a good thing, but it’s almost scary at times because we’ll have a line out the door. How are we going to get them in here? We have several people who knew about us [in the beginning] and could come in and out easily. Then, out of nowhere, they were like, ‘I told my friends, and I can’t even get in.’”

Building off the supper club theme, the menu at Bistro 46 varies slightly from week to week as lunch specials and buffet items are posted on its website the start of each week. Buffet mainstays are fried chicken and fish in addition to baked macaroni and cheese, collard greens and candied yams.

The first Sunday of every month features smoked turkey with cornbread dressing and homemade peach cobbler. Other weeks include selections of meatloaf, chicken and dumplings and neck bones, which I found on my first visit to the buffet.

I arrived at noon to find a line of folks eagerly waiting to hit the buffet, and we waited a few minutes while staff put the finishing touches on the food. Customers get to choose from lemonade, water or iced tea before going through the line.

I opted for neck bones, a fried chicken thigh, black eyed-peas with rice, collard greens and macaroni and cheese.

The staff is accommodating, bringing out bowls for overflow beyond the plate, and I grabbed a slice of cornbread before sliding into a seat between the bar and large projection screens showcasing Olympic coverage. 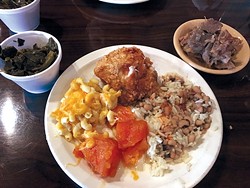 The chicken was juicy and crispy, perhaps salt-heavy, but very good. The best bite of the meal came when I combined neck bone meat with the collard greens. It was the first time my dining partner tried neck bones; it made them wonder what else they’ve been missing. Rich and full of flavor from all the fat and marrow from the bones, the meat was the star of my plate, followed by the candied yams.

Donny and Tonya work in the kitchen with the help of a few others while Tori greets customers and manages the line that ends out the door and begins where customers slide over to the buffet.

“We have a lot of experienced cooks who learned from their family. It’s the one good thing about soul food,” Tori Beechum said. “We’re not the best at plating things, but it tastes great.”

The family traditions and love poured into Bistro 46 come through in its food. Admittedly, I haven’t been to Oklahoma City’s mecca of soul food, Florence’s Restaurant, in my six months here, but Bistro 46 provides the best soul food I’ve had in the city. Judging by its popularity, I’d say I’m not alone.

A dedicated group of teenage servers refill drinks and bring out condiments and hot sauce, which Tori Beechum said is her mother’s commitment to providing early job experience for younger generations.

“[My mom] got started at the VA hospital and really believes it will help someone else,” Tori Beechum said, “that one day they will have a dream to start their own thing.”

Although I loosened my belt and was ready for a second trip through the buffet line, which also includes dessert and a separate salad bar, I didn’t try the fried fish because the line just kept getting longer and longer.

“It usually shortens at 3 p.m., but the risk you take is that we might be out or running low,” Tori Beechum said. “It’s something we’re trying to learn. You never know how much you need. It’s the struggle as a small business.”

Bistro 46 hosts live comedy the second Saturday of every month and a live gospel music showcase the third Sunday of every month. Saturdays are used for private rentals, and if you’re interested in booking, email contact@bistro46.com. Ordinary People Lounge at 3024 NE 23rd St., is a smaller venue also available for rent.

Part of me can understand the ire of Bistro 46’s regular customers for divulging the secret of a popular but under-the-radar restaurant. But I also want to highlight the work the Beechums and family are doing to provide great food and sociable community space.

Print headline: Comfort love; The Sunday soul food buffet at Bistro 46 is one of the tastiest deals in town.

What needs work: The fried chicken’s most prominent seasoning was salt.

Tip: Be prepared to wait in line.