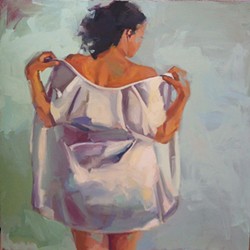 Two artists, who grew up worlds apart, have come together to celebrate the feminine form and explore female identity in more than 100 mixed-media works.

Behnaz Sohrabian, a Tehran, Iran, native, and Janet O’Neal, a longtime Santa Fe, New Mexico, resident, produced dozens of pieces for The Symbols Within Us, two simultaneous solo exhibitions on display during the month of August at JRB Art at the Elms gallery in the Paseo Arts District.

Despite their different backgrounds, Sohrabian and O’Neal approached the theme of the show from a similar social standpoint.

Sohrabian began painting as a child and later witnessed and experienced female oppression in her Iranian homeland. Around age 25, she became intrigued by painting the female form, and from then on, it became a full-time passion.

“Women are suppressed in the whole world, but in third world countries, they suppress women more,” she said.

Now, as an Oklahoman, Sohrabian recognizes that female oppression is universal — a fact she communicates in her 81 oil and acrylic paintings on display. Through intentional distortion of lines, blending of foreground and background and color choice, Sohrabian tries to “say something about personality, identity and character of human beings.”

O’Neal, a 28-year veteran of the art scene in Santa Fe and in Oklahoma City, believes both men and women have a feminine side, and through her mixed-media assemblages, she seeks to reveal it.

“I honor [Karl] Jung’s vision of recognizing both the light and dark aspect of the feminine by the use of the shadow silhouette in a number of images,” O’Neal said in her artist statement.

Known for her experimentation in media, O’Neal’s half of the exhibition comprises 32 pieces featuring three-dimensional elements in the form of found objects, such as watch faces, metal hinges, old photographs and text. Currently, she’s working with different types of wax and resin, creating a glossy effect on her assemblages.

“I feel that we need more feminine in the world,” she said. “The world is overrun by the patriarchal male. We need more positive qualities of the feminine.”

Through these specific symbols, O’Neal is asking the viewer “to venture across the portal into the world of the collective unconscious and dwell there for a while basking in the mystery of the feminine — finding yourself within these images.”

To learn more about Sohrabian and O’Neal and their exploration of the feminine and see online galleries of their artwork, visit jrbartgallery.com.

The Symbols Within Us