The threat to DACA is very real for recipients and their families, but also the greater community 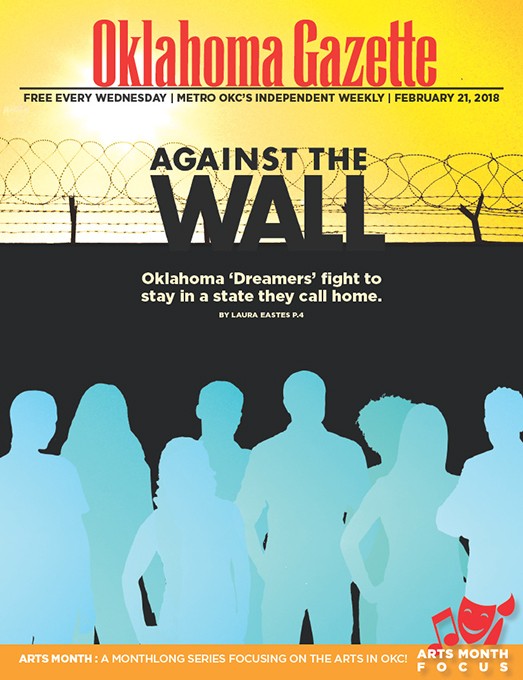 After the election of President Donald J. Trump, Jose Rubio braced for some sort of directive from him regarding immigration. Campaign trail rhetoric, followed by travel bans and blueprints for border walls, convinced the Oklahoma City resident that the president would make good on his promise to end the Deferred Action for Childhood Arrivals (DACA) program.

“We all expected it as soon as Trump was elected,” said Rubio, who was brought to Oklahoma City from Mexico at age 3. “It was just a matter of when.”

Rubio, his sister and thousands of other immigrant youth whose parents brought them to the United States as children faced that life-changing turn nearly six months ago. The program that allowed them to earn temporary resident status and freed them to legally work, study, serve and more was given a March 5 phase-out deadline. Congress would be forced to act to preserve the protective statuses of 880,000 people, including about 7,500 Oklahomans, according to U.S. Citizenship and Immigration Services.

The morning of Sept. 5, 2017, a heartbroken Rubio thought of his sister, Jennifer, when he heard U.S. Attorney General Jeff Sessions announce DACA’s end.

“She wants to be a nurse,” Rubio said. “Without DACA, she can’t practice. She is going to school, and she struggles because it is a difficult program. She might never be able to practice, even though she has been here her entire life.”

Rubio paused. After a sniffle, he went on.

Following the announcement, Rubio demonstrated on Capitol Hill three times, calling on Congress to pass legislation in protection of “Dreamers,” and he met with U.S. Sen. James Lankford. Back home, he spoke at Dreamer rallies at his school, Oklahoma State University-Oklahoma City (OSU-OKC). He shared his story with white church congregations. And during the second federal government shutdown and after the government re-opened, he remained optimistic that a deal on DACA was coming, but waiting for Congress to act is easier said than done.

“I grew up thinking I was an American just like everyone else,” Taz Al-Michael said.

At 14, Al-Michael learned otherwise. He came to learn why his parents said no to sleepovers and didn’t sign permission slips for field trips. Now, his parents were saying no to Putnam City North High School’s trip to New York in which performing arts students would perform at Carnegie Hall.

The son of a Bangladeshi couple, Al-Michael was born in Brunei, a small, oil-rich sultanate country in Southeast Asia. When he was 9 months old, Al-Michael entered the U.S. with his visa-issued parents, who received misguided advice that young children were granted visas at borders. To make matters worse, Al-Michael was not issued Brunei citizenship.

“I was undocumented with no documents whatsoever,” Al-Michael said.

The saving grace was DACA. Within a year, at age 15, Al-Michael applied for the program. With help from an immigration attorney, he was advised to find every trophy and locate any certificate he had ever earned in his short life to prove his character and contributions to the community.

“When I finally got my work authorization and social security card, I remember my parents were crying with joy,” Al-Michael said, “because they didn’t have to worry.” 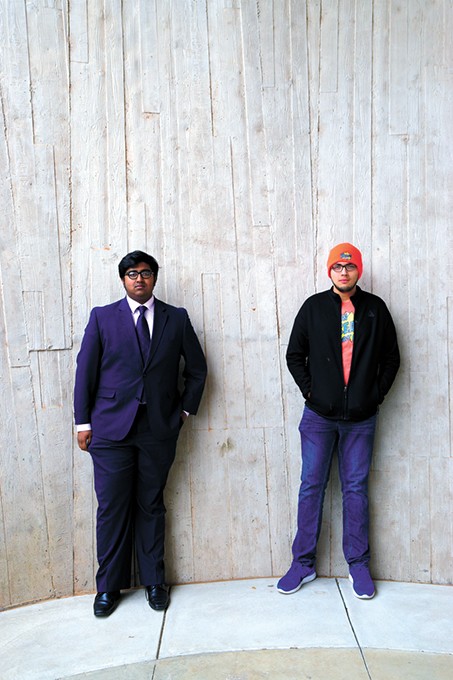 While DACA allowed Al-Michael to live the American dream he always wanted with a driver’s license, a college acceptance letter and more, Al-Michael remained silent about his status. In late 2016, he broke his silence after hearing his peers discuss “bad hombres” and “illegal aliens” and reference Islamophobia in immigration policies.

At last fall’s rally in support of DACA recipients on the University of Oklahoma campus, Al-Michael, who is a student, placed his story into the spotlight.

“I didn’t know anybody else who was like me because not many are open about their status,” said Al-Michael, who is the only one in his family without legal status. “It wasn’t until I found Dream Act Oklahoma that I found my community, people who knew what it was like. It grew beyond that cultural boundary. This is a civil right. This is a human rights issue.”

Faith leaders have been among the most vehement in demonstrating against the end of DACA and advocating for a legislative solution in Washington, D.C., and in communities across the nation. Oklahoma City is no exception.

In 2016, Rev. John-Mark Hart of Christ Community Church noticed how immigrants were portrayed on television in terms of immigration policy. Not only did it disturb him, it contradicted his experience with thousands of first-generation and second-generation immigrants he encountered through his ministry. To Hart, immigrants come to the U.S. for the sake of their families, to provide a better life for their children. They struggle with low-wage jobs, poverty and racism.

With immigration policy at the center of the 2016 presidential election, Hart’s congregation sought to increase understanding of immigrants. Scripture served as the inspiration for their action plan. Christ Community Church found other faith communities also committed to loving immigrants. Then they helped launch El Camino, a coalition of local faith groups.

“There was a public conversation on this issue which was not based on facts,” Hart said. “There were all too few moral voices in the conversation. We wanted to tell the true story of these people, and we wanted to have a serious moral conversation about our obligations as human beings to take care of each other.”

El Camino organized March 2017’s six-mile prayer pilgrimage in which 500 people walked from Santa Fe South Elementary School to Frontline Church. Days after the announcement to rescind DACA, hundreds attended their vigil for “Dreamers” on the steps of the Oklahoma Capitol.

Then there is Rev. Nathan Hedge, who runs Immigrant Connection at May Avenue Wesleyan Church. The ministry provides immigrant services, including DACA application assistance. Last December, when the ministry hit the two-year mark, it recorded helping 200 clients from 35 countries.

Hedge, like many other faith leaders, not only advocates for DACA recipients but also for humane immigration reform. Recently, a client arrived at Immigrant Connections looking for help to legally emigrate his son from Mexico to the U.S. For this client, Hedge said, the only option was to file and wait more than 20 years for an answer.

“My heart is broken for the undocumented in our society, including the ‘Dreamers’ who are really at the wrong end of some sour rhetoric,” he said. “None of us want to be called ‘illegal.’ We are not necessarily advocating for the breaking of laws. We understand the rule of law is necessary. The rule of law must also be tempered with the law of love.”

The debate over DACA and immigration has a direct correlation to the economy. New American Economy’s research finds that 93 percent of the 11,672 young people in Oklahoma who are DACA-eligible are working, thus contributing $20 million in state and local taxes.

Immigrant workers, including DACA-recipients, fill gaps in the labor market. In the U.S., where close to one in four construction laborers is an immigrant, builders closely watch discussions on DACA and immigration, said Mike Means, executive vice president of Oklahoma State Home Builders Associations.

“There is nothing more devastating to an industry than when you can’t count on that workforce,” Means said. “One day, they are there. The next day, they could get deported. We’ve had situations where ICE [immigration officers] will come on a job site. The guys with green cards run, mainly because they’ve got to protect a friend or a brother.”

Means said the homebuilding industry has long advocated and asked federal leaders for comprehensive immigration reform in hopes to create stability for workers. While reform should include border protections, “Dreamers,” along with guest workers, need to be addressed.

While DACA recipients are in the early stages of their careers and lives, many are following their American dream. At Scissortail Community Development Organization, where the program Aspiring Americans helps undocumented and DACA youth navigate opportunities in higher education, Robert Ruiz frequently meets students with aspirations to study engineering, pharmacy, education, nursing and more.

“They are our heroes,” said Ruiz, explaining Aspiring Americans seeks to remove obstacles “Dreamers” face when they seek higher education.

This past year, Ruiz noted that fewer students have sought help. The reduction is not related to need but to DACA’s uncertainty.

“We talk a lot about merit-based immigration policies, but there is probably no better group that merits legal status than these students,” Ruiz said. “These are people that we want and who have proved they are contributed to our society.”

For months, “Dreamers,” along with immigrant advocates, civil rights groups and business and faith leaders, have called on members of Congress to pass immigration reforms.

“It is really going to take individuals stepping up to help, make a difference and become allies,” Ruiz said. “That could look like a lot of different things, advocating for legislation both federal and state, becoming a contributor to a scholarship fund.”

Last week, 18 days before the March 5 deadline and after heated discussions on Capitol Hill, the U.S. Senate failed to pass legislation addressing DACA recipients and other immigration reforms. Yet, because federal courts in California and New York issued temporary injunctions requiring the administration to extended DACA, it appears DACA will extend beyond March 5. Though much is still unknown, the calls for action continue.

“Though there are various moral and legal ambiguities in the issue of immigration, there is no ambiguity to ‘Dreamers,’” Hart said. “They are in no way at fault. To leave them in the shadows would be morally abhorrent. To deport them would be abhorrent. The only morally acceptable option would be to create a pathway for them to stay here legally and participate fully.”

Rubio and Al-Michael continue to wait like they have for more than five months, and they are sharing their stories.

“People say we lost our leverage,” Rubio said. “We’ve always said that the one leverage we have that no one can ever take from us is our stories. It really does humanize it. It does unite people. They can take anything else, but our stories are our best weapons.” 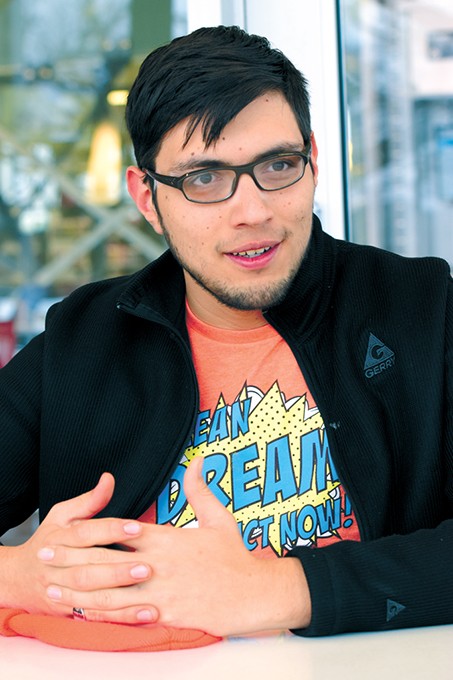 Print headline: Deportation threat; The threat to DACA is very real for recipients and their families, but also the greater community.