Historical records archived in Oklahoma informed Killers of the Flower Moon, the David Grann book that Martin Scorsese used as the basis for his upcoming film. 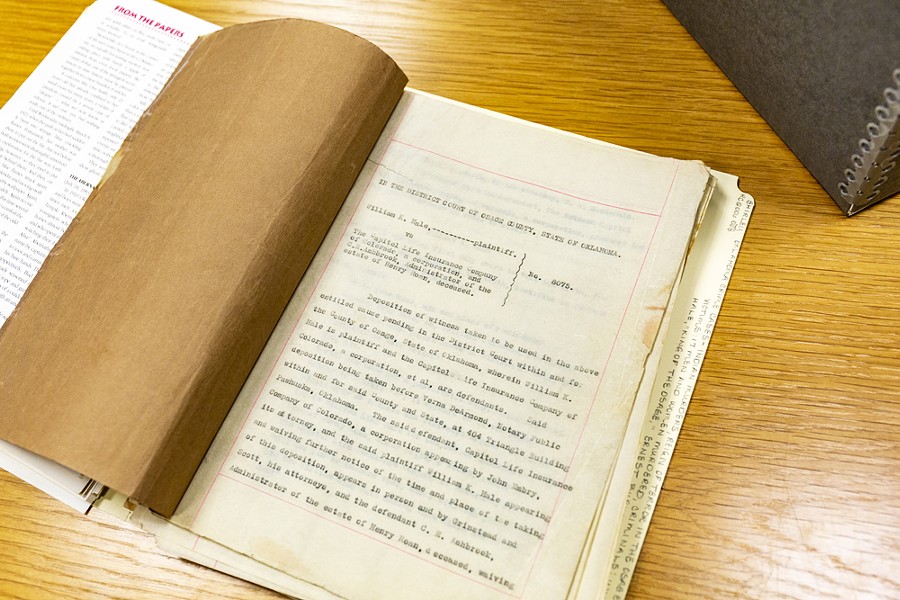 Leave it to Martin Scorsese to take a relatively obscure series of murders from a century ago and bring them into sharp focus.

Until the last few years, not many have heard of what were called both the “Osage Indian trials” and the “Reign of Terror” that took place in right here in Oklahoma. Officially, there were only about 20 victims, but from 1921 through 1931, more than 60 members of the Osage tribe were viciously picked off one by one. Some suspect the number of associated murders actually breaks 100 victims.

After being forced to move off their lands in Missouri and Arkansas during the late 1800s, the tribe found themselves in a desolate and seemingly resourceless reservation in the Osage Hills of Oklahoma. Unbeknownst to the government and the Osage, the lands they were forced to take over ended up holding a fortune of black gold beneath them. The Osage were paid handsomely for oil rights to their land and, with that, built mansions, bought fancy cars, had servants and dressed in the most up-to-date fashion.

By the Roaring Twenties, many Osage were among the wealthiest in the land, but in short order, 18 Osage and three non-Natives were found murdered. These murders remained unsolved up until 1929 when, after an extensive FBI investigation, three people were arrested and convicted. Cattleman William Hale was considered the mastermind of the plot.

Killers of the Flower Moon, written by David Grann and published in 2017, outlines this series of unfortunate events. Grann, along with Susan Lee, scoured historical records and Kera Newby, director of the Dickinson Research Center and Curator of Archives at the Oklahoma National Cowboy and Western Heritage Museum, was asked to assist. Newby knew just where to look.

Glenn D. Shirley was a Stillwater police officer and an avid collector of Oklahoma historical information. Later in his life, he became known as one of the prominent historical writers about the American West. When Shirley passed, his family sold all 1,100 boxes of archived documents he’d accumulated, known as the Western Americana Collection, to the museum. One of these boxes, labeled “Reign of Terror in the Osage,” contains the original court transcript of William Hale’s trial for the murder of Henry Roan and the associated fraudulent life insurance policy Hale took out prior to Roan’s demise. Roan was the only victim Hale was convicted of killing.

The box also contains old newspaper clippings, authentic negative photographs of William Hale and documents that give detailed accounts of the horrific and tragic events that befell many members of the tribe. In addition to Shirley’s immense historical collection, Arthur Shoemaker also contributed archived documents to the museum, but his emphasis was on a man by the name of Henry Grammer. Grammer, a bootlegger and rodeo champion suspected to have played a part in the Osage murders, suspiciously died during the investigation. Shoemaker contributed a key piece of evidence used to tie William Hale and Henry Grammer to one another — a one-of-a-kind photograph of the two amongst other cowboys at a team roping event. This proved Hale and Grammer were associates.

The Oklahoma National Cowboy and Western Heritage Museum was an integral part of the historical research for both the book and Scorsese’s movie, expected to be released this November.

Digital versions of some archival records are available on the Dickinson Research Center’s website and visits can be made by appointment.