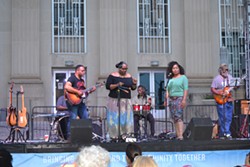 Anyone who makes visiting Byron’s Liquor Warehouse part of their regular Friday night routine can relate to The Unlikely Blues Band’s tribute to the popular NW 23rd Street liquor store.

The all-acoustic quintet released its debut EP You Can’t Grow Old Without a Little Bit of Pain on April Fools’ Day and has since performed at the Festival of the Arts and Will Rogers Park Amphitheater. The band also performs May 28 at Paseo Arts Festival.

The second track on the four-song EP is “Byron’s,” a cheery and relatable anthem for everyone who has reveled in the joy of payday with a celebratory drink.

Unlikely Blues Band (UBB) guitarist and founding member Chuck Lunn said he wrote the tune based on his own Friday night experiences. Due to Byron’s venerable place in the local social scene, he said it always gets a fair amount of feedback from fans. He said many people approached him after the band’s recent Festival of the Arts show.

“I had so many people come to me and tell me a different story about their Friday night experience at Byron’s,” he said.

Even the song’s namesake has taken notice. Lunn said Byron’s invited the band to perform the song in the store at a future date.

Most people who hear Lunn’s band name have one question come to mind: What exactly makes the band “unlikely?” To explain, Lunn starts at the beginning.

Many years ago, a guitar teacher named Willis Peoples gathered a group of eight of his students — a crew of mostly lawyers and doctors learning music as a hobby — for a seasonal Christmas show at Penn Square Mall. The group included Lunn, who works as a family practitioner.

Lunn has less-than-pleasant memories of the performance.

“We were the worst thing you ever heard — eight terrible guitar players,” he said. “We were having a drink afterward, talking about how terrible it was and [Peoples] was amazed that we were all interested in the blues.”

Despite their lackluster debut, the students regrouped and refocused as a blues band. Peoples scored the mostly unproven band a Festival of the Arts gig because, at the time, booking the festival was not as competitive as it is today.

By chance, local blues legend French “Doc Blues” Hickman walked by as they performed. He stopped and listened. When the set ended, Hickman walked over and offered them a gig for an event he was hosting at his Mojo’s Blues Club.

“The band he had playing Friday nights was drinking too much and stealing from him,” Lunn said. “He hired us, figuring doctors and lawyers wouldn’t drink. He was wrong.”

The group cut its teeth performing regular gigs for Hickman under the name Two Quacks and a Shyster. Lunn said they often performed with sheet music. Still, they had fun.

The act was forced to find a new band name after the participating lawyers started complaining about being called shysters. He said his wife summarized the predicament it in the most eloquent terms.

“Finally, my wife looked at us and said, ‘You guys are such an unlikely looking blues band,’” Lunn said. “So that’s how it started.”

The UBB lineup looks more the part these days. The group’s core players are Lunn, his niece Kim Hasan as lead vocalist, Ben “Doc Woobie” Canady on bass guitar and vocals, Tom Robertson on harmonica and vocals and Shelby Deuce on percussion and vocals. Oddly, guitarist and songwriter Lunn is the only member who does not sing.

“The band has some criticisms,” he said, referring to his vocal ability.

Up until four or five years ago, UBB’s sound was an electric-driven, Chicago blues style. Eventually, Lunn tired of playing clubs and decided to go acoustic.

The change in sound opened the band up to a wider range of performance venues and opened the door for an increased level of creativity and craftsmanship. He said it’s easier to hear what is going on when one plays acoustically.

“It’s quieter, it’s still rhythmic and you can still get down on it,” he said. “I love it.”

UBB made a shift from performing covers to original material around the time it switched over to acoustic jams.

Songwriting is a fairly new skill for the longtime guitarist, though the Can’t Grow Old EP shows he has the chops.

“It was a little nerve-racking at first,” he said. “The leap was really kind of scary. You go to the band and say, ‘I’ve got this song I want you guys to try,’ and they’ve never heard it before. It was well received among the band, and we played it out a little bit.”

The EP was recorded at Castle Row Studios in Del City. Lunn said he was reading Oklahoma Gazette on his lunch break one day we he came across a story about the new state-of-the-art studio.

The musician had been looking around for studios for months. Many studios he contacted never returned his calls. The ones that did insisted that the band record electrically instead of acoustically. Intrigued by what he read about Castle Row Studios, Lunn put down the paper and drove to Del City to check it out.

“It was over lunch,” he said. “I literally drove down and knocked on the door. [Studio owner Garrett Starks] answered, and he took me around the studio. I pulled out my laptop with my visionary demo tapes and he didn’t laugh at me.”

He remembers his grandmother playing “Wang Dang Doodle,” one of her favorite songs, all the time. UBB regularly performs the tune in its set, often inviting children up on stage with them.

Lunn said there is nothing his band plays that would make it an inappropriate show for any member of the family. UBB is a self-described “older” band, but Lunn said that is part of the fun.

Print headline: Improbable triumph, The Unlikely Blues Band follows an unusual path to the release of its debut EP.