Starring Joseph Gordon-Levitt (Inception) as renowned French high-wire artist Philippe Petit, the movie tells the story of one man’s journey to be the first person to walk “the void” between the World Trade Center’s twin towers in 1974. 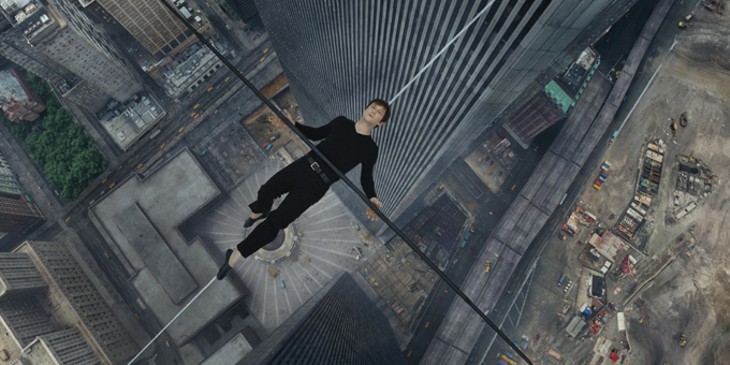 With great films like Back to the Future and Forrest Gump under his belt, Robert Zemeckis is synonymous with blending great special effects and great storytelling.

His earlier work is a bit zanier with hits like Romancing the Stone and Who Framed Roger Rabbit. However, Zemeckis recently has turned to more serious work, The Walk being a prime example.

Starring Joseph Gordon-Levitt (Inception) as renowned French high-wire artist Philippe Petit, the movie tells the story of one man’s journey to be the first person to walk “the void” between the World Trade Center’s twin towers in 1974.

Though it is set in Paris and New York City and supported by a cast of unknowns, with the exception of Ben Kingsley (Schindler’s List), the weight of this film’s success lies on the shoulders of Gordon-Levitt, and he proves himself worthy as the lead.

But, he also demonstrates the need of every leading man to have a leading lady. The beautiful and talented, if unknown, Charlotte Le Bon (The Hundred-Foot Journey) fills the role nicely as Annie Allix. Le Bon’s lightning-rod style allows Gordon-Levitt to strike with ferocious abandon, but she also keeps him grounded when necessary.

Petit’s 1974 “le coup” between the two towers took 45 minutes to complete. To show Petit’s eight passes along the wire, the director was faced with the daunting task of creating a film that kept his audience entertained until the walk takes place. This is the only portion of the movie that falls short.

With a running time of just over two hours, though brilliantly acted by Levitt, the story has a difficult time keeping audiences engaged until the characters started breaking into the World Trade Center to set up the rigging for the wire and prepare Petit for his journey.

The tightrope walk is where Zemeckis’ directorial skills shine. He used state-of-the-art photorealism and 3-D IMAX film, and it made every minute a nail-biting, palm-sweating panic attack.

Every moment atop the towers, you feel the 1,350-foot height and tension along the 450-pound cable stretched between the two buildings and in the pit of your stomach. Despite all of this, Zemeckis soothes his audience as Petit calms himself and steps onto the wire.

With sweeping camera work and a perfect score, The Walk enables the audience to look down with astonishing clarity into the void. Zemeckis puts the audience on the cable with Petit as he writes himself into New York City history.

Only in the closing moments do viewers realize the true purpose of Zemeckis’ work: The film is a tribute to a man who took a walk and made a city fall in love with the two greatest buildings on Earth.

Print headline: High-wire act, The Walk is a breathtaking tribute to a man and the World Trade Center’s twin towers.