Over the last 10 years, The Wedge Pizzeria, 4709 N. Western Ave., has changed a lot of things. Staff has come and gone. A second location opened at 230 NE First St. Breakfast became a daily occurrence. It added a patio to nearly double the size of the dining room.

“We’ve had the same menu and same prices as we did 10 years ago,” she said. “I wanted to streamline it and make it more user-friendly.” 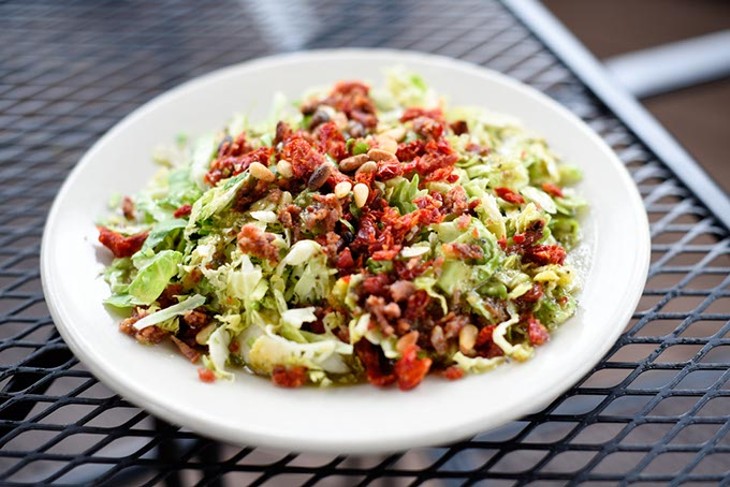 Before hordes of Wedge-heads take to the streets with pitchforks and torches, don’t worry; the Truffle Shuffle and the Prosciutto e Formaggi aren’t going anywhere. But there are a few new options for diners to consider.

More than anything, the changes give some favorite specials a permanent home on the menu. Little tweaks like allowing customers to get three meatballs instead of five or two or three prosciutto-wrapped pears instead of four or codifying the always-available appetizer platter ($25) into law are meant to help servers.

“Sometimes, it gets so busy, you forget to tell people about stuff like that,” Ortega said. “Then they look over during a meal and say, ‘Hey, I didn’t know we could get that.’”

The much-loved Brussels sprouts salad ($7) is now a permanent fixture, as is the option to make any of the pies into a calzone or a personal pizza.

When The Wedge opened in fall 2006, there wasn’t anything like it, Ortega said. When she returned to the state with her family seven years ago, she visited the restaurant and was amazed at the level of excitement and chaos.

Over the last few years, dozens of new pizzerias have opened, but Ortega said customers still find their way back to The Wedge.

“People tell me they tried other places, but this is still their favorite,” she said.

Much of that credit is due to Jesus and Armando Cortez, the head cooks at the Western and Deep Deuce locations, respectively. Each has been with the restaurant for five years and made the menu his own.

On the other end of the spectrum is The Brandon ($14), a vegan pizza designed by the Deep Deuce location’s weekend manager Brandon Malone. The pie is covered in pesto, roasted red onion and red bell peppers, spiced walnuts and pepperoncinis.

Though it’s the only vegan pizza explicitly listed on the menu, Ortega said the restaurant makes several vegan options for a number of customers on restricted diets. The Wedge also makes a gluten-free crust.

Another addition is pasta ($8), which gives the rare diner who doesn’t want pizza an added choice. The noodles come with a choice of meatballs, chicken or vegetables tossed in marinara or Alfredo sauce.

After 10 years in business, Ortega said, it was past time to redo the menus. But that doesn’t mean more changes won’t come. The restaurant still serves seasonal off-menu specials and will add more to the mix as ingredients become available.

“I’ve been here four years, and I still believe in us,” Ortega said. “We continue improving the patio and the playground. As a parent, I think it’s important to give people a place to go where the kids can run around and be safe while everybody enjoys a good meal.”

That’s the kind of thinking that just might keep The Wedge in business well through a second decade.

Learn more about the updated menu at thewedgeokc.com.

Print headline: Still burning, A decade in, The Wedge Pizzeria keeps the fire going with a new menu.