Therapy dogs on the rise 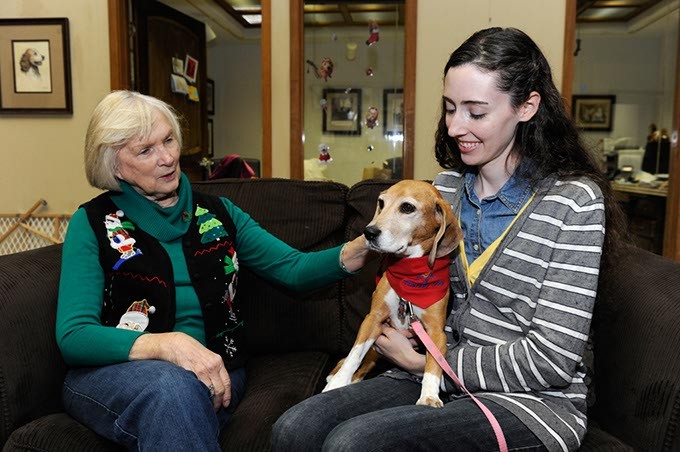 The fight to provide care for those who suffer from mental illnesses in Oklahoma has been an ongoing battle.

The U.S. Substance Abuse and Mental Health Agency found in 2013 that 21.6 percent of Oklahomans struggle with mental disorders. The Department of Mental Health and Substance Abuse Services reports that Oklahoma ranks 46th lowest in the nation for spending per capita to treat mental illnesses. The same study shows that 1 in 4 people in our state will need treatment for mental illness or substance abuse issues in their lifetime.

Often, dog therapy is an effective, lower-cost form of treatment. People love dogs, and for good reason: They have been scientifically proven to love us back.

Returning love Recently, scientists scanned dogs’ brains, finding in the caudate nucleus — the area of the brain where emotions can be measured in dogs and humans — that activity in that part of the brain increased when around a familiar human. Barbara Lewis, director of A New Leash on Life Inc, an Oklahoma City nonprofit dedicated to training therapy dogs, believes people love dogs because they don’t judge. “They don’t care what race you are, what you have, if you’re sick, how you smell, if you’re homeless, male or female,” she said. “Dogs just want a little bit of the love they give you back in return.” Lewis said that use of therapy dogs to treat people with mental illness is on the rise. Service dogs and therapy dogs serve quite different roles. They are trained for specific patient needs, including visual assistance, seizure alerts and allergen awareness. Service dogs are protected under the Americans with Disabilities Act (ADA), so they can travel almost anywhere with their handlers. Therapy dogs provide emotional support, comfort, companionship and affection in places ranging from retirement homes to disaster areas. However, while they are highly trained dogs — much like their service dog peers — therapy dogs are not protected under ADA guidelines.

“Everyone has distinct wiring within. Some people respond to various therapies differently, and it’s important to find one that suits each individual,” said Paul Williams, clinical director of Adult and Family Outpatient Services at NorthCare, a nonprofit mental health care facility in Midtown.

“As soon as a therapy dog is present though, oftentimes, that patient will start opening up and feel a sense of safety ... in talking about whatever it is they are dealing with,” she said.

“And in tough cases, I have seen how my therapy dog can often make that personal connection with those who are hurting or largely distrustful of people,” Vidal said. “In many instances, my therapy dog has been the bridge for building that relationship between me and my client, in addition to serving as the bridge between where they are at and moving towards healing.”

Lewis estimated that the cost of training a therapy dog runs around $250.

However, public donations allow organizations like A New Leash to cover costs including staffing and caring for dogs during the training process. As popularity grows for therapy alternatives, Lewis said she worries about the long-term survival of organizations like hers.

Wonder drug? In the treatment of post-traumatic stress disorder in war veterans, therapists and doctors also write “prescriptions” to encourage the use of therapy dogs. United States Department of Veteran Affairs research shows that each day, an average of 22 veterans commit suicide.

Therapy dogs not only help reduce suicide risk, but Lewis said patients who use them often reduce prescription drug needs by 50 percent.

“Animals are a widely available and low-cost resource,” she said. “Animal-assisted therapy is a fast-growing field with more and more research coming out revealing a wide array of benefits.”

In fact, Oklahoma is a leader when using therapy dogs to aid traumatized children required to testify in court.

For more information or to donate to A New Leash on Life, visit newleashinc.org.

print headline: Paw power, Animal-assisted therapy is becoming more popular, and there are organizations that help those in need of therapy dogs.