Vampire Weekend played to a sold-out crowd at Diamond Ballroom — and the band didn’t disappoint.

There wasn’t anyone obviously over the age of 40, but that’s to be expected for a show by a bunch of fresh-faced college students who still look like they might get carded for beer. Vampire Weekend has spent the last year and a half winning hearts and minds with its latest offering, Modern Vampires of the City, a significant departure from its previous albums. 2008’s self-titled debut and Contra, 2010’s follow-up, are studies in cramming for exams at Ivy Leagues, yachting, international travel and tennis whites. The band’s third effort surprised fans and non-fans alike with its depth and serious tone — not so sure of itself or what it all means. Gone is the devil-may-care attitude of its first two efforts, and what shines through is a vulnerability; it’s not all fun and games. The lyrics are smart, introspective and, at times, apologetic. The guys have had some experiences, and they don’t know the meaning of anything anymore.

Performing live, the band is still charmingly earnest. While its members have shaken much of their school-kid shyness, you’d be hard-pressed to get Koenig to look anywhere but at his guitar, his mic and the floor. He’s concentrating, and it shows. These are delicate songs, yet the band pulls them off masterfully.

The opener was “Diane Young,” raucous and laser-focused right out of the gate. Two more high-energy songs followed: “White Sky” and “Cape Cod Kwassa Kwassa.” The audience was clearly pleased to hear older tracks as well as new, and there were times when you could hear the audience singing over Koenig’s vocals. 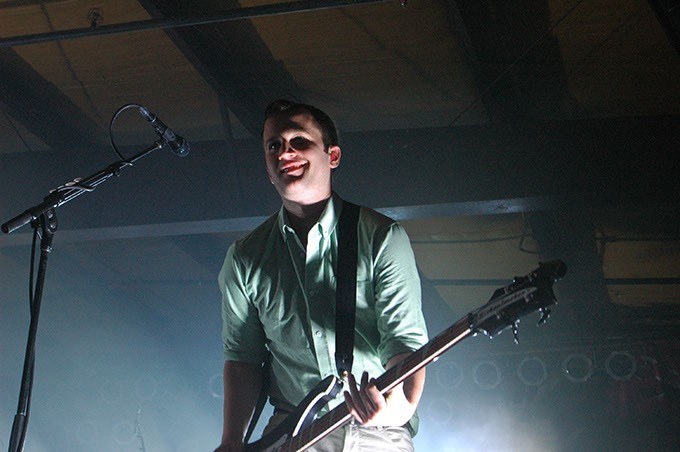 They then blazed through “Unbelievers,” “Holiday,” “Step” and “Fingerback” without taking a breath. Koenig even invited the audience to do a sing-along to “Horchata,” and the audience eagerly responded. The sparse lighting worked beautifully to the band’s advantage during the song, remaining subdued during the verses and building to a near-blinding corona during its crescendo. The band went straight into “Shots” as the audience eagerly kept time with its hands and feet, and then it effortlessly switched gears to “Everlasting Arms,” one of the more beautiful songs on Modern Vampires. Everyone had officially loosened up by that point, as if the seat belt light was off and they were free to move about the stage. Of course, standing next to bassist Chris Baio, anyone would look static and stiff.

“California English” was played even faster than on the album, and it was the tightest the band sounded all night, with Koenig spitting lyrics with perfect diction and Baio with his signature goofy dance moves. That said, talented multi-instrumentalist Rostam Batmanglij was the one to keep your eye on. The man is a wonder, effortlessly transitioning from one instrument to the next. His backing vocals blended beautifully with Koenig’s during “Obvious Bicycle,” the closing number and show highlight, with its somber beauty and restrained lighting ending the first set on a sweet, slightly sad note.

After a short respite, the band played some of its signature encore songs. “These are all songs about people,” Ezra announced, launching into the mellow “Hannah Hunt” infused with a punchy afro-beat. Hearing the lyrics, “If I can’t trust you than dammit, Hannah,” at fever pitch was one of the more unusual sing-alongs, though they went out with the same roar they came in with, launching full force into “Walcott,” a frenetic, bouncy good time to end the night.