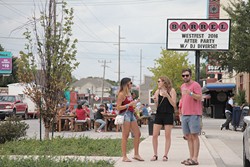 Western Avenue Association might be transitioning directors, but the third annual WestFest is on course to be as big as ever.

The free street fair and music festival began in 2015 and has established a strong reputation and following in a competitive local market for live music fests. This year’s event is noon-10 p.m. Aug. 19 along N. Western Avenue between NW 41st and 43rd Streets.

Norman rock and Americana band Beau Jennings & The Tigers headlines a talented bill of Oklahoma performers. Other draws include art and creative vendor booths, food trucks and an expanded children’s area. Organizers are preparing for a crowd of around 7,000 people.

Former Western Avenue executive director and WestFest organizer Rachael Taylor announced in July she was leaving the position to move back to California, her home state. While the significant change so close to the festival date might sound like it has the potential to disrupt the event’s planning, WestFest is in capable hands as former event consultants Jennifer Easley-Maynord and Kindt Steven Myers move into co-producer roles.

Myers said while planning WestFest has been a little hectic since the two stepped into a direct organizational role with the festival, most large-scale community events get busy in the weeks before they launch.

“I think it’s inevitable to experience change like [Western Avenue Association] is experiencing,” Myers said. “I think it’s nominal on the scale of the overarching plan that they have.”

WestFest’s main stage is on 41st Street between VZD’s Restaurant & Bar and A Date With Iris. Jennings, who once fronted the band Cheyenne, was a featured performer during the street festival’s inaugural year.

This year, the Americana/rock singer-songwriter and filmmaker won first place in the prestigious Woody Guthrie Folk Festival Songwriting Contest. His band The Tigers released the single “Back in Town” in October, which KOSU The Spy’s The Oklahoma Rock Show later listed as the best Oklahoma song of 2016. The band is currently working on a new album.

“The band and I are very excited to return to WestFest to headline this year,” Jennings said in a media statement. “It’s always great to be part of events that go a long way toward enriching the community.”

“We know it’s a family-friendly event,” he said. “We know there’s a lot of families and people raising children in that area and district. We want them to feel welcome.”

Easley-Maynord and Myers have worked together to put on past events like Exchange on Film Row. Easley-Maynord was a committee member for the first WestFest in 2015.

“This was just kind of a continuation of my partnership [with Myers], which we felt has been a good fit,” she said.

Easley-Maynord called Western Avenue one of Oklahoma City’s most historic districts, which she said presents both positive and negative aspects when organizing a major community event.

“I think a challenge of that is that you constantly have to reinvent yourself in different ways,” she said, “especially with other districts coming up and having different events and festivals.”

The coproducers are working to strengthen bonds between WestFest and the surrounding Crown Heights and Edgemere Heights neighborhoods.

“That’s one of the big hurdles we see in festivals when they are hinging on residential neighborhoods but it’s technically a business district,” Myers said. “The buy-in from those residents is huge — not only their welcome, but their participation.”

Reception from the surrounding communities has so far been positive. Myers said both neighborhoods are working to pass out fliers and promote the event.

Easley-Maynord said a close partnership between the area’s businesses and community members should be positive for everyone involved.

“You really grow with something like this,” she said. “Returning to the festival and working with committee members and neighbors and business owners, there’s that journey together.”