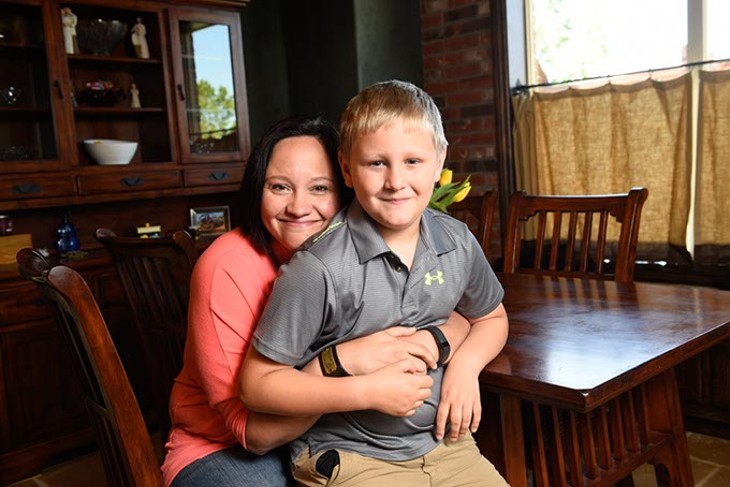 One night, Adam Elliott stood in his parents’ bedroom and screamed. He flung everything within his reach across the room.

His mother, Wendy Elliott, tried to clam down her second-grader, just like hundreds of times over the past year when his rage flew out of control. Sometimes, he flipped his desk at school or banged his head. One time, he scratched a classmate’s face with a pencil.

The piercing, sob-laden screams ended as Adam passed out on the bedroom floor. The next morning, Wendy mentioned the incident, but the blond-haired, blue-eyed boy remembered nothing from the night before.

In addition to the outbursts, at times, Adam would walk in precise circles. He rubbed and snapped his fingers, always in the same ways. His circular pacing was part of his daily regimen, as were paranoid, fearful statements about break-ins or dangerous weather brewing. He also would ask questions repeatedly, even after he heard an answer.

At school, Adam sat in his chair and stared down at his desk. He wouldn’t look his teachers in the eye and didn’t answer questions. He wasn’t friendly to his classmates. He covered his ears when the class became noisy.

A physician diagnosed Adam with attention-deficit/hyperactivity disorder (ADHD). However, his symptoms went beyond ADHD to include tics, paranoia, violent rages and dilated pupils. For years, medical professionals told the Elliotts that the boy had characteristics of autism, but no formal diagnosis was made.

Wendy suspected her son might have autism when Adam was a toddler. Despite no diagnosis, he visited speech and occupational therapists and eye doctors in addition to his pediatrician. However, the therapies and medications never seemed to work.

“Everyone said they had no clue why he wasn’t getting better,” Wendy said. “We went from a kid that sort of had problems to progressively getting worse. There was no answer.”

As Adam’s rages became daily occurrences, so grew the frustration and anger of his parents, who believed their next option was to check their 8-year-old son into a psychiatric hospital.

In December 2014, the Elliotts moved to southwest Oklahoma City from Kansas City, Kansas. As Adam began visits with an entirely new medical team, Wendy was optimistic her son would finally receive an autism diagnosis.After a few months in OKC, Wendy and Adam arrived at OU Children’s Physicians offices for an appointment with a child psychiatrist. Wendy recounted her son’s medical history, including his reoccurring strep infections, to specialist Rebecca Daily.

Daily’s response was to immediately stop all ADHD medicines, as they acted as “fuel on the fire” for patients who might have PANDAS, an abbreviation for Pediatric Autoimmune Neuropsychiatric Disorder Associated with Streptococcal Infections. For an official diagnosis, Adam needed further tests, specifically the Cunningham Panel. If Adam did have PANDAS, he likely would be treated with antibiotics, slowly ending the rages, tics and obsessive behavior.

“I left with the biggest sense of relief I’ve ever had in my entire life,” said Wendy, who had never heard of the disorder. “I knew what was wrong with my child, and I knew the answer to the question I’d been asking.”

An estimated 1 in 200 children is affected by PANDAS, according to research by the PANDAS Network, a California-based nonprofit founded by parents of children impacted by the autoimmune disorder and PANS, pediatric acute-onset neuropsychiatric disorder, a broader term for the illness.

Most people, including medical professionals, are unaware of the condition that links infections to certain psychiatric disorders. Susan Swedo, a National Institute of Mental Health physician, discovered the connection. She studied a group of children whose symptoms followed a strep infection. In 1998, she concluded some patients have a disordered autoimmune response to strep infections.

While the world of medicine is constantly evolving, it took time for Swedo’s research to reach the medical community. In 2012, the National Institute of Mental Health, led by Swedo, published a paper establishing criteria of the condition, which was called PANS. That same year, Stanford University opened a clinic to treat and study PANS/PANDAS in children. Two years later, the Journal of Child Adolescent Psychopharmacology published recommendations for evaluating patients who have symptoms of the disorder.

Oklahoma City holds a unique connection to the evolving understanding of PANDAS/PANS. Madeleine Cunningham, a researcher at the University of Oklahoma Health Sciences Center, developed a panel of tests to assist physicians in diagnosing neuropsychiatric disorders.

In 2013, Cunningham co-founded Oklahoma City’s Moleculera Labs with Craig Shimasaki with support from i2E and the Oklahoma Center for the Advancement of Science & Technology. The two believed Cunningham’s tests, named the Cunningham Panel, ought to be available to physicians around the world. Through the panel, physicians view a patient’s autoimmune and anti-neuronal status, which helps decide a proper diagnosis and therapy. If PANDAS/PANS is diagnosed, a physician can treat the cause — the infection and the underlying immune system dysfunction, instead of the behavioral symptoms — to help restore an improved quality of life.

While the test aids children with PANDAS and PANS, it is not a diagnostic.

The average patient who undergoes the Cunningham Panel has visited five physicians and their parents have invested thousands of dollars in treatment, which either had no or little impact. Some patients were previously diagnosed with autism, ADHD, Tourette’s syndrome or obsessive-compulsive disorder, Shimasaki said.

Physicians have ordered the test more than 3,000 times since Moleculera’s launch in early 2013. Many, driven by the lack of patient progress, take the try-and-see approach to the panel. If a patient tests positive, treating the immune system often prompts the patient to get well, Shimasaki said.

Antibiotics were prescribed to Adam for treatment of his PANDAS condition. Within the first month on medication, his rages and paranoia began to subside, while his interest to go outside to play heightened. Adam’s eyes were no longer dilated.

“It was amazing to me,” Wendy said. “We have this facility, Moleculera, here. I am not a religious person, but had we not come here, he probably would have been diagnosed with autism. He would have continued to take medication that didn’t work.”

With the proper treatment, Adam and others with PANDAS can live normal lives.

This month, Adam completes the third grade at Mustang Valley Elementary School, where he is a member of the robotics team. Outside of school, Adam is learning the violin, takes tennis lessons and participates in a youth archery league.

“[PANDAS] makes kids stormy inside,” Adam said as he pointed at his brain. “You can feel the storm. ... Kids who have PANDAS get really mad easily. Sometimes, for no reason, they start to get horrible rage.”

Like many parents, Wendy wants to raise awareness and wants the diagnosis accepted by mainstream medicine.

Wendy recommends that parents who suspect their child has PANDAS/PANS contact Moleculera, which can recommend physicians across the United States.

“There are so many physicians who don’t know about it,” Wendy said.

Print headline: Not autism, Adam Elliott’s tics, paranoia and rages couldn’t be explained by any syndrome until he was diagnosed with an autoimmune neuropsychiatric condition tied to a strep infection