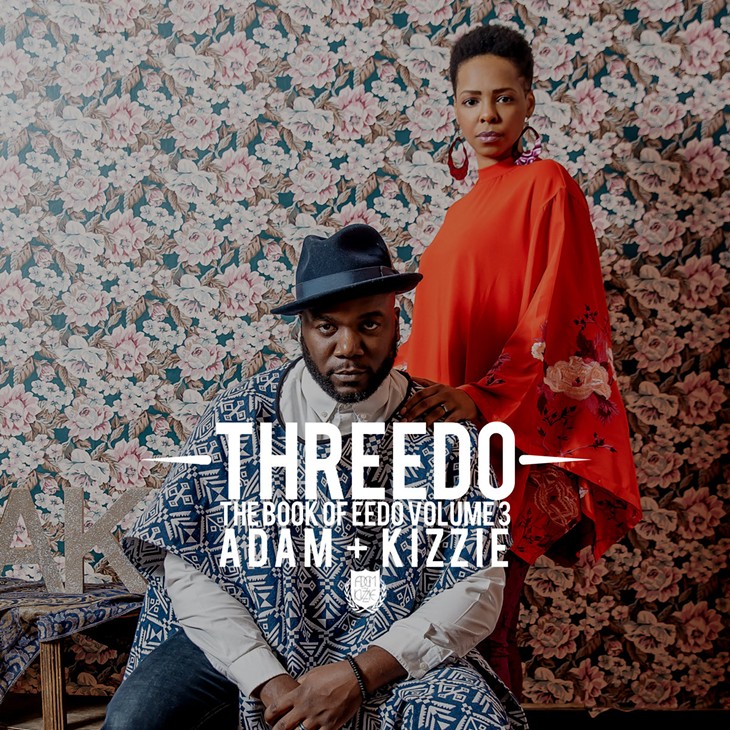 The second installment in Adam & Kizzie’s Book of Eedo album series was released in 2014 with 12 songs and more than one hour of music. The duo’s newest third edition, given the alias THREEDO, is a much slimmer release with just seven songs and about 30 minutes of run time.

The R&B, soul and hip-hop husband-and-wife combo Adam and Kizzie Ledbetter are not alone in their brevity. Rapper Kanye West and his G.O.O.D. Music label are in the middle of releasing a series of highly publicized, seven-track albums of their own — some of which do not even eclipse 30 minutes.

So were the Ledbetters channeling a short-album trend with their new release? Well, sort of.

In a recent interview with Oklahoma Gazette, Kizzie said the couple liked that their album came out shorter, but they were not trying to mimic West or any other releases. The album was actually written and recorded several months ago.

“It just felt right, having seven tracks,” she said. “It really completed the album.”

The songs on THREEDO represent the fruits of two marathon 20-hour recording sessions at Edmond’s The Music Group studio. The couple went into the sessions with the idea of recording an album that represented their live shows, which often do not include any more instrumentation than a keyboard and a loop pedal. Every sound on the album was a product of either the couple’s voices or their fingers.

“All the drums you hear on it are me beatboxing,” Adam said, “which is what I did live.”

While the intention was to create music on the album that they could easily replicate live, the duo was not always successful  in that effort. Everything they did was their own, but some of it features a lot of different meters and time signatures that would be hard to pull off in a show simultaneously.

“What we ended up doing was creating music that we could do ourselves, but only in the studio,” Kizzie said.

But that won’t be a problem when Adam & Kizzie perform their THREEDO album release show 8 p.m. June 29 at Tower Theatre, 425 NW 23rd St. They plan on performing with a six-piece band and bringing in several surprise guests. Adam said they are even bringing in choreographers to help get the production at top level.

“It’s going to be the Adam & Kizzie experience for Oklahoma City,” he said.

THREEDO’s second song “It Was Almost R&B” is an anthem for self-love and self-care. But it is also a literal telling of Kizzie’s creative process one day.

When putting the song together, she set out with the specific focus of crafting a straightforward R&B song. While some of her vocals touch on R&B influence, there are a lot of soul and other aspects that keep her from that classification. For many years, in fact, she had a hard time labeling her sound.

“There’s not really a formula or a foundation that I can compare it to,” she said. “Because of that, I didn’t trust that it was any good.”

Trying to write an R&B song was very frustrating because after several attempts, she did not feel like she was any closer. But after taking a step back, she was able to see things with a new perspective.

“I looked at all the music I had created in the process of trying to create an R&B song and realized I had this whole catalogue of great music,” she said. “This song in particular was the beginning of that journey.”

Adam said “It Was Almost R&B” is a song that can be applied to individuals as well.

“I think that’s how we approach a lot of things in life, and I think the bigger message is that people aren’t genres and lifestyles aren’t genres,” Adam said. “But we’re always making it that way; we’re always calling ourselves certain things. We limit our range of experiences when we do that.”

Adam said for the last few years, he has been reflecting on the ways he feels about racism as a black man and realizing that a lot of the things he complains about in the subconscious behaviors of others were turning up in some of his own behaviors toward women.

“I think it’s super common,” he said, “and it’s really just a matter of always checking your privilege and being someone who gives space and room for other people to be who they are without being judgmental about it.”

Kizzie said THREEDO’s predominant message is about love in all its forms.

“We firmly believe love is at the center of everything,” she said. “When we go away from that and turn our backs on it, that’s when things begin to fall apart.”

Adam & Kizzie made many rounds in local media as finalists for the $1 million Megastar competition, a global talent contest hosted by R&B superstar Usher. While the couple finished just short of the final prize, the experience had a big effect on how they will approach music going forward.

“I think the Megastar experience has really informed how we’ve promoted this album, more than anything,” Adam said. “There were times when we felt like we were on the campaign trail. From dusk till dawn, you’re making appearances.”

The duo already has the songs for a follow-up to THREEDO written. While this current album feels like a big moment for the band in its own right, Adam expects the next project to eclipse everything.

“Whatever doors are still closed to us,” he said, “this next record is going to blow them away.”