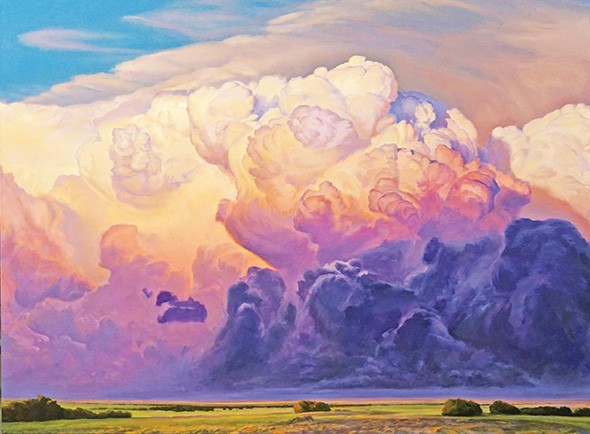 The Skies Have It opening reception

Holland takes photos of large thunderstorms after they move east past the city and turns them into large, oil-based paintings, a process that will be highlighted in his three-month residency that begins Friday at Mainsite Contemporary Art, 122 E. Main St., in Norman.

Holland will set up his studio inside the gallery for people to watch his process to finish a five-foot by six-foot cloudscape painting from start to finish. His residency — The Skies Have It — has receptions 6-10 p.m. Friday (May 10), June 14 and July 12 in conjunction with the 2nd Friday Norman Art walk each month.

“Being an Oklahoman, [clouds] were always something I was interested and fascinated by,” Holland said. “As a kid growing up, I was always looking at storms and interested in lightning.”

While working on a series dedicated to the sweeping curves of highway overpasses, Holland took a photo with a thunderstorm in the distance. When he turned it into a painting, something about drawing the thunderstorm clicked in him.

“It was the first time I put a thunderstorm in my art, and I liked the way it looked and felt,” he said. “I started developing that as my path in art.”

Holland studied art as a young boy and took a few classes at Oklahoma City University, where he graduated in 1983, but it largely remained a hobby. He worked at a stained-glass manufacturer and then owned a business that produced copper bird feeders for retail distribution across the country. In 2012, he and his business partner sold the company and he began to pursue art full-time, but not without some self-doubt.

"I searched for things that I love, and thunderstorms were at the top of my list."
—David Holland tweet this

In the intervening years, he drew using oil pastels because they didn’t require the set-up time of mixing paint and waiting for it to dry. He did a series of drawings depicting the change modern life has had on technology and families.

“I did a show with them in 2005, and I had 35 pieces that weren’t terribly expensive and only sold two of them,” he said. “It was a huge, huge wake-up call for me. As an artist, you need to be able to sustain yourself. I realized that wasn’t the path and had a huge crisis of confidence, not knowing if I wanted to continue art. I loved doing that series and I felt it had a lot of meaning, and so did other people, but it wasn’t something they necessarily wanted on their walls.”

Holland took classes through Oklahoma Visual Arts Coalition, which teaches artists the business side of the industry, how to market their work, do their taxes and get gallery representation. Holland, who is now represented by Howell Galleries in Oklahoma City, credited the classes with allowing him to jump into being a full-time artist in 2012, when the opportunity presented itself.

The second big epiphany was finding inspiration from the weather.

“I had to figure out something I loved to paint,” he said. “You have to have that sincerity behind your work in order for it to resonate with people. I searched for things that I love, and thunderstorms were at the top of my list.”

Holland tracks storms as they move through the city, waits until they get 25 or 50 miles east of the city, so that they can be seen in entirety, and takes photos. 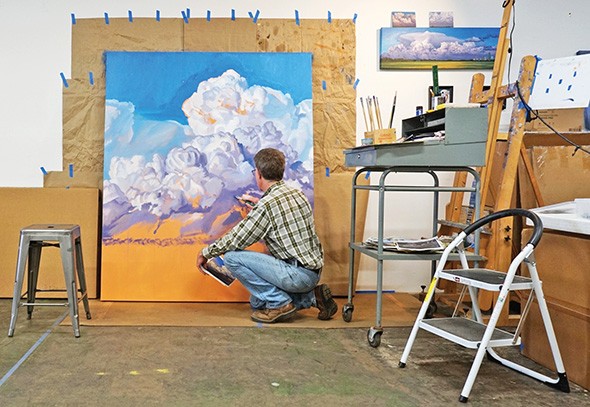 “The beauty is what I key-in on and what I want to enhance the most,” he said. “So that people, even though they see it as a severe weather, they can appreciate the beauty I see in them.”

Holland mentioned a recent conversation with someone who recently returned to Oklahoma after living in Australia and New York.

“They noticed that the skies were different and the skies in Oklahoma were spectacular compared to other places in the world and the country because of the weather and the flatness of Oklahoma — you can see storms coming,” Holland said. “The beauty of storms is something to me that is completely overlooked, especially in Oklahoma, where people are so ingrained in the technical aspects — the dry line, sheer line, all of the National Weather Center jargon that you hear. I was used to the severity of storms, so the beauty was something that I could show naturally.”

Norman Arts Council executive director Erinn Gavaghan approached Holland with the opportunity for the Mainsite residency, and Holland is hoping to tap into Norman’s market around the National Weather Center to make an impact with his paintings.

He will work with local scientists to include facts in the captions for his artwork and in his presentations of the art.

“This opportunity, I cannot express how excited I am; it is the fulfillment of a dream,” he said. “I want it to be interesting to both general public, but also scientists and weather researchers in the industry.”

Mainsite Contemporary is open 11 a.m.-4 p.m. Tuesday-Saturday, and admission to the gallery and exhibitions is free. The Skies Have It runs through July 12.