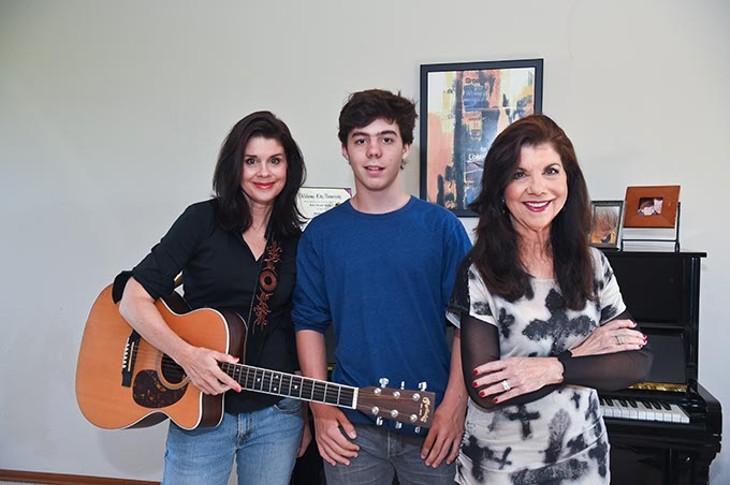 Some incredible musical talent has come out of Oklahoma — Reba, Vince, Blake, Carrie and Garth, to name a few. More than 50 years ago, a young girl from Blanchard named Jody Miller set out for Hollywood to make her name in the music business. A short time after arriving on the West Coast, Miller became one of Oklahoma’s first Grammy Award winners.

Throughout the 1960s and ’70s, Miller recorded and toured extensively, racking up an impressive number of hit singles. “Queen of the House,” “He’s So Fine” and a country version of “House of the Rising Sun” made her a fixture on country radio.

In the 1980s, Miller semi-retired to the peace and quiet of her Blanchard ranch. Now, she has resurfaced with her daughter and grandson, three generations of music in one family.

“I look over and there’s my daughter Robin and now my grandson Montana. It is so surreal; I really haven’t grasped it yet,” Miller said.  “I feel so fortunate to have them both onstage with me.”

Miller was only 25 when she won a Grammy Award for “Queen of the House,” a finger-snapping answer to Roger Miller’s “King of the Road.” It hit the charts in the spring of 1965 and quickly became her signature song.

“Everyone thought Roger and I were married,” Miller said. “We were both from Oklahoma, both of us on the charts with basically the same song, so that just added to the mystique of the record.”

Miller’s daughter, Robin Brooks-Sullivan, has made a name for herself as well. She was part of the 1980s band Maya and part of the original broadcast team that opened Remington Park in 1988, and she has been on countless television commercials throughout Oklahoma.

In the late ’80s, Brooks-Sullivan and her mom teamed up professionally and recorded and toured together as Jody and Robin, with a Judds-like flair. Now, Brooks-Sullivan is happy to be back onstage with the new act.

“Here in the last year or so, Mom and I had an opportunity to work together again, and now, with my son Montana in the act, I can see it really touches people,” Brooks-Sullivan said. “On our last gig we did together, the older folks loved seeing Mom with her grandson, and then people my age loved it because they understand what it’s like for somebody my age to be there with their parents and to have the younger ones there too.”

Montana Sullivan said he has been around music since he was born.

“I was about 11 when I wrote my first song, and a couple of years ago, I looked back at it and thought, ‘That’s not very good,’” he said. “But over the years, I’ve just been practicing and practicing, and finally, I wrote a good one — at least in my opinion.”

Sullivan plays the piano, guitar and bass and is trying to get a handle on the drums. He has also started singing onstage. The 16-year-old thinks he might follow in his family’s musical footsteps.

“So I’m thinking music as a profession would be a good idea,” Sullivan said. “Nothing is set in stone because I also have a passion for filmmaking and cinematography and editing. Maybe I could combine the whole musician thing with filmmaking and see where that leads me.”

Much of Miller’s Capitol and Epic catalog is available on iTunes, and some of Sullivan’s music is there as well. Blanchard is naming a street after Miller, an honor for which she said she is very humbled. Three Generations is planning to hit the circuit with more bookings soon and will travel to Wilson, Oklahoma, to headline its annual Fourth of July celebration.

“It just seems so natural for us all to get together, and the music flows so easily. We joke and have fun, and the audience can see that. We really are having a ball,” Miller said.

Print headline: Family affair, Three generations of musicians perform as one act for the whole family.