OK Innovate seeks to take Oklahoma City’s technology and innovation ecosystem to the next level.

Seven months into the job, Joshua Fahrenbruck, the chief operating officer of OK Innovate, sees the future of Oklahoma City’s burgeoning tech and innovation scene. The city’s potential success hinges largely on the work of the past decade, from the support for co-working spaces and incubator startups to the existing tech talent in the OKC market.

From Fahrenbruck’s vantage point, the entrepreneurs based in the metro such as visual marketing platform Tailwind, software company Whiteboard Mortgage CRM and Springboard VR, which creates virtual reality software platforms for arcades, represent the epicenter of the emerging tech ecosystem that is turning OKC into a regional hub for entrepreneurs.

“We are never going to be Silicon Valley, but we can be the best version of ourselves,” Fahrenbruck said in an interview with Oklahoma Gazette. “That means cultivating startups and entrepreneurs, especially around some of the industries that we are really good at here. … Great companies, great startups and great entrepreneurs exist here.”

OKC as a regional hub for entrepreneurs and innovation could serve as the nexus for millions of dollars in new venture capital and thousands of new jobs as well as further diversifying the local economy.

OK Innovate, which began in fall 2017 as a program of E Foundation for Oklahoma, launched as an effort to convene and cultivate the state’s entrepreneurial community. E Foundation, created by Lt. Gov. Todd Lamb, leaders were motivated by the fact that Oklahoma ranked fourth in startup numbers, according to the 2016 Kauffman Index of Startup Activity. Meanwhile, they viewed troubling statistics in other areas, like Oklahoma’s 35th rank in evaluating risk capital and entrepreneurial infrastructure and its 44th rank in technology concentration and dynamism, according to the State Technology and Science Index.

The question for OK Innovate was simple.

“What can we do to help advance the ecosystem?” Fahrenbruck asked. “Because we see some exciting, interesting things happening, and we want to see those things flourish. How do we, together, work towards closing the gaps and advancing the ecosystem?”

"We can make Oklahoma City a place that is a regional hub for entrepreneurs. " — Joshua Fahrenbruck tweet this

OK Innovate joins a strong local network of investors, incubators, entrepreneurs and startup companies that are already sustaining and growing. Fahrenbruck recognized this but noted there is room for improvement.

OK Innovate set its sights on studying the entrepreneur and startup scene of cities comparable to OKC. Currently, a consultant is gathering data — from the number of new businesses to information on small business loans — to rank the cities, but also to inquire how others are successfully growing their entrepreneur ecosystems.

“What are the practices that other cities are utilizing to help their entrepreneurs and their ecosystems thrive?” Fahrenbruck asked. “We are not the only city trying to get entrepreneurs and startup companies to pick their city to go to.”

A report is warranted to bring OKC’s entrepreneurs, startups, investors and more together on a shared list of priorities.

“We are hoping to bring a coalescence around a shared strategy,” Fahrenbruck said. “That doesn’t mean we all have to be doing the same things or that one person is in charge but that we can agree on trying to move the needle. Therefore, bring some community, collaboration and some intentionality to how we represent ourselves.” 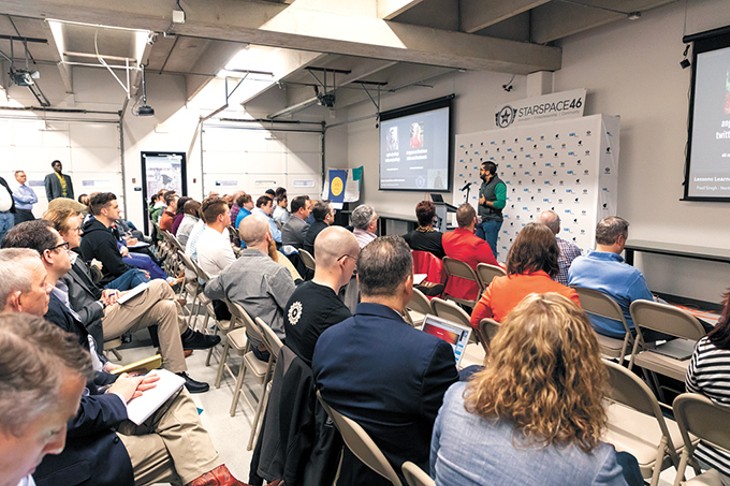 OKC is ripe for becoming an emerging tech hub. Fahrenbruck named current tech talent as well as the service providers, which included popular co-working spaces like StarSpace46, business incubators like the Oklahoma City Thunder’s Thunder Launchpad and Techlahoma, a nonprofit supporting the tech community, as key drivers of the scene.

Further, OKC is becoming less of a flyover zone for investment, Fahrenbruck said.

In late April, Paul Singh — an investor and entrepreneur from Washington, D.C. — brought his North American Tech Tour to OKC and Norman after connecting with Fahrenbruck and OK Innovate. Central Oklahoma served as Singh’s 100th stop on the tour, which began two years ago with a group of venture capitalists called Results Junkies. Together, they travel across the country to meet with entrepreneurs in startup communities that aren’t located on the coasts.

Fahrenbruck said Singh told him that in three out of four cities he visits, he invests. In less than 48 hours in central Oklahoma, Singh invested seed money in two businesses.

Singh, who shared his insights on starting and running a business, largely conveyed a message that entrepreneurs and startups can be successful in Oklahoma. There are no excuses not to try in Oklahoma.

“The people who think Oklahoma is the farthest behind are the people who live in Oklahoma,” Singh said during his remarks at an event at the University of Oklahoma’s Tom Love Innovation Hub, as reported by The Norman Transcript.

Fahrenbruck said that can be a new way of thinking for local entrepreneurs and startup business leaders who might have previously believed they need to move to a larger city or locate to a coastal area to succeed.

The conversation connects to one of OK Innovate’s goals: to retain startups and tech talent.

While OK Innovate remains a young organization, it views itself as being on an important mission driven by a heightened sense of urgency as many cities are competing to become home to the next big tech hub. OKC is in good shape, Fahrenbruck said.

“I am inspired by what exists here and am really confident that with some intentional effort and with some collaboration, we can make Oklahoma City a place that is a regional hub for entrepreneurs,” Fahrenbruck said. “I fully believe that entrepreneurs and startups are an important part of our economic future. The more that we invest now, the more we will be able to build on the legacy of MAPS, the Thunder and the successes that we’ve had over the last 20 years.”