Like any good high-level corporate manager, Sam Presti seems like a big picture guy. He talks philosophically about things like organizational principles, maximizing talent and focusing on continuous improvement rather than outcomes.

So, when speaking to the laity – as the Oklahoma City Thunder executive vice president and general manager did on Sept. 25, ahead of the start of training camp – Presti did not directly answer reporters’ questions as much as he discussed his organization’s keys to long-term NBA success.

“I understand there is a bias for action in today’s society, but we’re content with driving a path to what we feel is sustained excellence,” Presti said. “We’re going into seven years of history, and a lot of the teams we’re competing against have 60.”

The team’s standard bearers – including reigning MVP Kevin Durant, three-time all-star Russell Westbrook and veteran leaders Serge Ibaka, Kendrick Perkins and Nick Collison – have helped build an organizational culture that emphasizes work ethic, competitive will and humility, attributes that are being passed on to the team’s less-experienced players, Presti said.

“I believe that’s what gives this organization a chance to do something incredibly unique in terms of having an opportunity of championship-contending basketball for a very long time,” he said.

The margin for error in the NBA is small, and more games are won than lost, Presti said.

“We have to focus on the areas we can control: our composure, our consistency, our concentration throughout the season,” he said. “We’re playing for something bigger.” 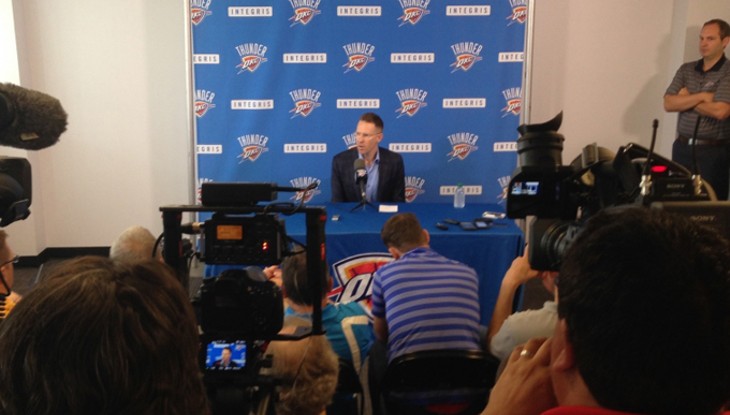 The biggest question entering training camp is point guard Reggie Jackson’s contract. The Thunder has until Oct. 31 to reach terms on a contract extension or else he becomes a restricted free agent next year. Jackson is a “core member of the team,” and the Thunder has not considered trading him like they did James Harden in 2012, Presti said.

“We want to invest in Reggie,” Presti said. “He’s a guy that we see being here for a long time.”

As for Jackson’s expressed interest in being a starter, Presti said the Thunder’s strategy is to always have that “defensive disposition to begin games,” with a “really explosive bench that usually grows and gives our coaching staff a lot of options and matchup opportunities,” Presti said.

“It would be troubling to me if (Jackson) wasn’t confident in himself,” he said.

Presti deferred questions about who will start at the number two guard spot and will Steven Adams overtake Perkins as the Thunder’s starting center until after training camp starts. The real objective is to optimize team cohesiveness throughout each game, “given the way the team is constructed and some of the horsepower we have in the front unit,” he said.

Guards Andre Roberson and Jeremy Lamb and forward Perry Jones have all improved during the offseason, through the NBA Summer League and workmanlike gym time, Presti said.

On the injury front, Perkins will miss about two weeks after straining a quad, and forward Grant Jerrett will miss the start of the regular season while recovering from left foot surgery, Presti said.