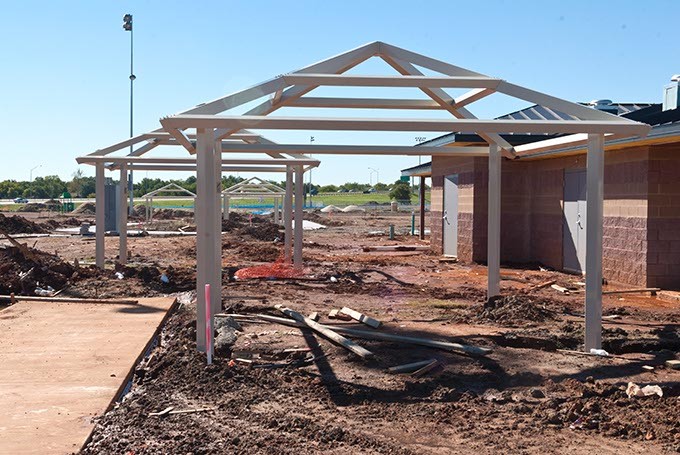 The first thing you noticed was everything looked new: the brick homes, the stockade fences, the school building, the playground, the fresh dirt. Next, you noticed the brand-new Oklahoma City Thunder blue basketball court and the hundreds of schoolchildren cheering as the larger-than-life basketball players stepped off the bus to greet them.

Nearly 18 months after a tornado ripped through Moore, damaging or destroying three schools, the Oklahoma City Thunder kept a promise made amid the devastation and tragedy. The team dedicated three new basketball courts on Oct. 22 at Briarwood Elementary, Highland East Junior High and Plaza Towers Elementary, where seven children were killed on May 20, 2013.

On that day, joy replaced despair. At Plaza Towers, Thunder players celebrated among the students, teachers and administrators. Forward Serge Ibaka said he didn’t recognize the area as the same one he had toured in the tornado’s aftermath.

“I can’t believe it,” Ibaka said. “After my first time when I was here, it was so sad. Everything was different. To come here today and see all the new things, it just feels like a new place.”

The courts were made possible thanks to a donation from the Thunder and its nonprofit, Thunder Cares Foundation. The organization pledged to donate $1 million after the EF5 tornado struck. The donation benefited the Red Cross of Central Oklahoma, the Salvation Army Central Oklahoma and the United Way of Central Oklahoma. The remainder of the pledged funds rebuilt the three Moore courts, as well as public courts in Bethel Acres and El Reno.

At Highland East Junior High, Moore Public Schools Superintendent Robert Romines watched as students shot baskets on the school’s new court. He said his district has bounced back bigger, better and stronger since the tornado, thanks to support from the community and organizations like the Thunder.

“They promised they wouldn’t go anywhere, and as you see, they’re still here today,” Romines said of the Thunder organization. “This group has really taken us on, and they are no longer friends. They’re family.” 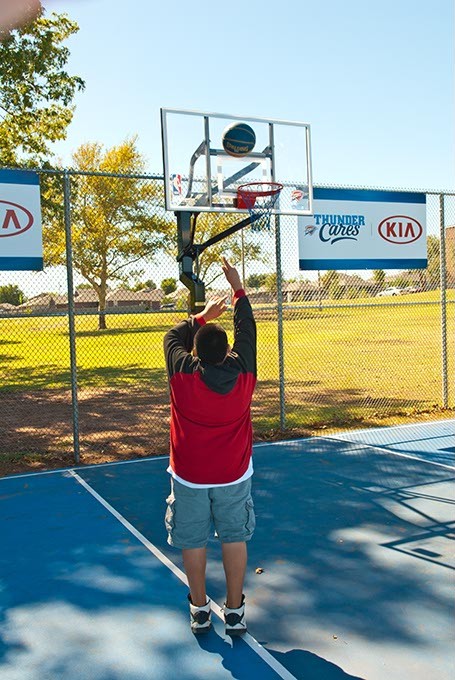 Giving back The Thunder has rebuilt nine basketball courts in the Oklahoma City metro. Working with Oklahoma City Parks and Recreation, the team has refurbished three Oklahoma City courts, most recently a new court at Schilling Park in southeast Oklahoma City that was dedicated during a Sept. 25 ceremony.

The renovations at Schilling Park and Pitts Park cost about $20,000 each, said Oklahoma City Parks and Recreation spokesperson Jennifer McClintock.

The Thunder has made it a key mission to give back to the community. Soon after the team relocated to Oklahoma City, its leaders decided to help refurbish local courts, said Dan Mahoney, the Thunder’s vice president of broadcasting and corporate communications.

“We feel that it spreads the love of the game. It spreads a focus on physical fitness,” he said. “It helps build stronger neighborhoods.”

One of the ways the Thunder Cares Foundation raises money is through in-game auctions, often featuring items like signed Thunder merchandise and jerseys worn during games.

“It’s been very successful,” Mahoney said of the auctions. “It allows our fans to be a part of it.” 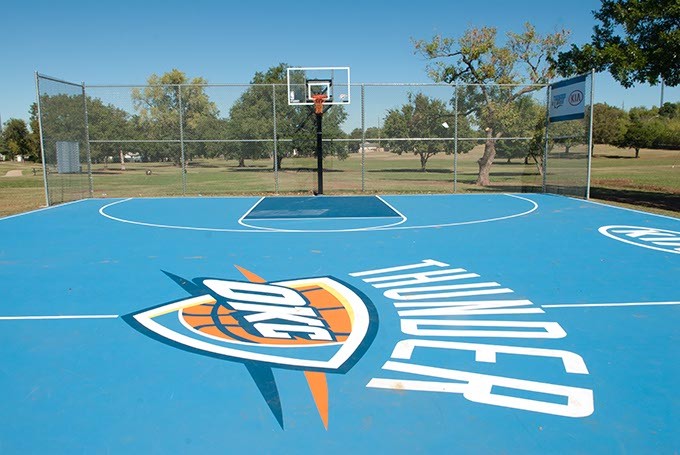 The center is expected to be open in spring 2016 and is among the sites being considered for hosting the Olympic canoe and kayak slalom trials for the games in Rio de Janeiro.

Sports facility upgrades are part of projects underway at Woodson Park near SW 29th Street and Independence Avenue and Memorial Park on NW 36th between Western Avenue and Classen Boulevard. The projects were approved by voters during the 2007 general obligation bond issue that included $89 million for park improvements.

The project has been targeted for years as the popularity of youth soccer has skyrocketed. The new Woodson Park facilities will help enhance the city’s youth soccer leagues and spur economic development through hosting tournaments that attract out-of-town teams, McClintock said.

A full-time coordinator will be hired to run the new facilities, and the youth soccer season should be able to expand from three months to year-round, she said.

Memorial Park, one of the city’s oldest parks, is undergoing a $1.9 million renovation that includes resurfaced tennis courts, a new basketball court and a great lawn that could accommodate soccer or other sports. Work is expected to be complete by this spring.

In addition, Oklahoma City’s trails network is expanding. MAPS 3 includes an 8-mile multi-use trail that shadows Interstate 44 from Lake Hefner to the Oklahoma River. The 12-foot-wide trail will tie to the Lake Hefner trails at Meridian Avenue, staying on the west side of Interstate 44 to NW 16th Street before connecting to the Oklahoma River Trail at May Avenue. Construction is expected to begin on the $13.8 million project by this spring. Work is currently underway on the 7-mile MAPS 3 West River Trail, which will connect Lake Overholser to Crystal Lake and the Oklahoma River.

The city’s overall goal is to provide residents facilities and programs that help foster community health and well-being, especially in children, McClintock said.

“That benefits everybody,” she said.