'Tis the season for The Nutcracker 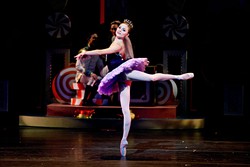 A holiday tradition every bit as time-honored as eggnog and fights with your relatives, The Nutcracker has long served as the only ballet some theater patrons see all year. In these parts, it might be the only ballet most have ever seen.

Even if that’s the case, audiences for this season’s Oklahoma City Ballet performance of Marius Petipa and Pyotr Ilyich Tchaikovsky’s masterpiece should find enough surprises to make them put it on the calendar again for 2016.

Thanks to a $500,000 donation last season from Devon Energy, audiences who haven’t attended the yearly Civic Center Music Hall performance in a while will be treated to new sets and costumes, both of which are lovely. Costume designer Susanne Hubbs’ updates, shimmering and staid at the same time, give the story an entirely different feel than the Baroque, slightly grotesque production that gave the willies to so many of us as children.

Gone is Drosselmeyer’s powdered wig, the eerie formality of the children’s party clothes and all the knickers, epaulets and other affectations that could give past interpretations of The Nutcracker an alien air. The new costumes are sleek, muted, almost Victorian, way more Downton Abbey than Amadeus.

The women’s costumes, no matter which time period they might have borrowed from, are beautifully detailed and retain their simplicity. Men never seem to have as much to work with in the costume department (see art imitating life), but The Nutcracker gives designers a yearly exception: Drosselmeyer (performed by Daniel Hardman and Joe Seaton). After all, if you can’t dress up an eccentric, one-eyed magician/toymaker, you might be in the wrong business. In this case, Drosselmeyer sports white face makeup and a knee-length, purple velvet coat in a look so reminiscent of Heath Ledger’s Joker that one can’t help but think it’s intentional.

The sets, designed by Gregory Crane, are wonderfully realized, especially when paired with Aaron Mooney’s light design. The opening scene is dreamy and sepia-toned, and when combined with Crane’s twisting bedposts and dramatic sense of proportion, the sets take on an almost Tolkien-esque look. In later scenes, especially “The Land of Snow,” the sets shimmer in beautiful contrast.

Artistic director Robert Mills has a fine stable of dancers to work with, and he choreographs the more swirling and hectic scenes beautifully. Whether it’s a stage filled with children or battling mouse armies, the movements are fluid, well-executed and lovely.

The Nutcracker has largely become, especially in recent years, a ballet for children. OKC Ballet’s production is no exception, as evidenced by its opening night audience, which was filled with dozens of beaming little girls in tiaras and ball gowns. The Christmas lights that adorn the boxes of the civic center change colors during the opening orchestral number (performed beautifully, as always, by Oklahoma City Philharmonic). When Clara (Amanda Herd-Popejoy, DaYoung Jung and Arianna Lawson) made her first appearance, the little girls in the audience gasped.

In short, it’s everything we expect from The Nutcracker, which is why we still go. What’s admirable is that OKC Ballet has found a way to let us keep enjoying it.