Stickles is truly a fan. His last gig there was March 9, just over six months ago.

“There’s really lovely people over there, and they’ve got a really nice setup,” Stickles said. “We’ll come back as many times as they’ll have us.”

Titus Andronicus has released a new project, the compilation S+@dium Rock: Five Nights at the Opera, since its last visit. The July release spans 45 minutes and features live and rearranged versions of tracks from the group’s 2015 studio offering The Most Lamentable Tragedy (TMLT), a triple-LP, 93-minute, 29-track punk rock opera. 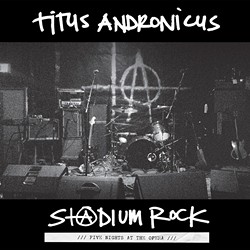 Stickles said TMLT’s great scope might have made it a “somewhat impenetrable” record for some fans. He has no regrets about the project’s length, but he hopes S+@dium Rock helps the music seem less daunting.

“It’s a way to hopefully demonstrate that even though the material comes from this sprawling, overblown project, when you get right down to it, it’s really just a collection of rock and party songs that we like to think rock the party right,” he said.

Shea Stadium records every concert at the venue for its website, so Stickles said it gave them a lot of material for the live release. The band had around 10 hours of video to go through after its five-day stint.

Stickles, an admitted perfectionist, reviews gig recordings in the same way athletes and sports teams look at game film to learn from the past and correct mistakes.

“When you’re doing it, when you’re in the moment, you’re maybe not listening so critically or you can’t get an objective perspective on whatever it is you’re doing,” he said. “You’re just powering through and you’re letting the adrenaline of the moment take over.”

TMLT is a personal project for Stickles. The artist takes a metaphoric plunge into his own manic depression through the rock opera’s five acts. It took three years for the band to complete, and Stickles said it left him feeling physically and emotionally drained.

“It’s just a big mountain to climb — a lot of things to do, a lot of details,” he said.

When Titus Andronicus finished, Stickles said he was happy to leave the work in the hands of the people to dissect and digest as they pleased.

The band might have a tendency to create ambitious and sprawling works, but Stickles said Titus Andronicus, a band named after the late-1500s William Shakespeare tragedy, took on a rock epic partially as a way to close the door on that inclination. The next album will not be an attempt to one-up TMLT.

“It’d be on the edge of getting ridiculous at that point,” he said. “You could say that the rock opera was more than ridiculous enough.”

Fans should expect a change of pace from whatever Stickles puts together next.

“Whatever the next thing is,” he said, “it could only possibly go in the other direction.”

Titus Andronicus with A Giant Dog