The plates come out steaming, piled with homemade pasta under generous dustings of Parmigiano-Reggiano. A portion of ricotta- and fontina-filled ravioli is served with a walnut pesto on a dark, rustic plate, which provides a striking visual. On another dish, crispy salmon rests on a garlicky bed of risotto.

These are just a few selections available from the menu at Piatto Italian Kitchen, 2920 NW 63rd St.

The new restaurant opened in August as the most recent venture from Enis Mullaliu, former general manager of Vast, 333 W. Sheridan Ave.

Mullaliu, who is originally from Kosovo and fled wartime violence in the late 1990s, has made a home in Oklahoma City and worked his way up through the local restaurant scene.

After he and his family moved to Edmond, Mullaliu attended University of Central Oklahoma and found a job at The Black-Eyed Pea, followed by a stint at the former Edmond location of Pepperoni Grill. When that location closed, he quickly became head server at the Penn Square Mall location.

He went on to work at The Coach House, formerly of Nichols Hills Plaza, with chef Kurt Fleischfresser, whom he followed to Vast after several years of working together.

Mullaliu said pleasing customers and giving them the best dining experience possible is what has kept him in the restaurant business all these years. He has wanted to open his own place for roughly a decade.

"I’m very thankful that I invested my time in Oklahoma, and Oklahoma is returning the favor to me with the new adventure."
—Enis Mullaliu tweet this

The pieces for Piatto fell together fairly fortuitously, with the space opening up in May this year. After some brainstorming with Fleischfresser, Mullaliu decided to do Italian cuisine. He left Vast on July 1, and Piatto had its soft opening Aug. 2 and 3.

The menu keeps pasta front and center. Mullaliu said one of its most popular dishes so far is the Bolognese, an Italian staple with thick pappardelle pasta and braised short ribs. It’s another dish that’s quite impressive on the plate.

“Bolognese is something that people are familiar with, and when they have it, there’s something different in what we do,” he said. “We don’t grind our meat to make the Bolognese sauce. We pull it; we braise the meat.”

The cacio e pepe is another essential Italian dish, featuring a rich, peppery bucatini pasta. Other standouts on the menu include lamb osso buco, veal and steak Florentine.

Mullaliu believes the freshness of Piatto’s menu is what sets it apart from other Italian restaurants in the metro. 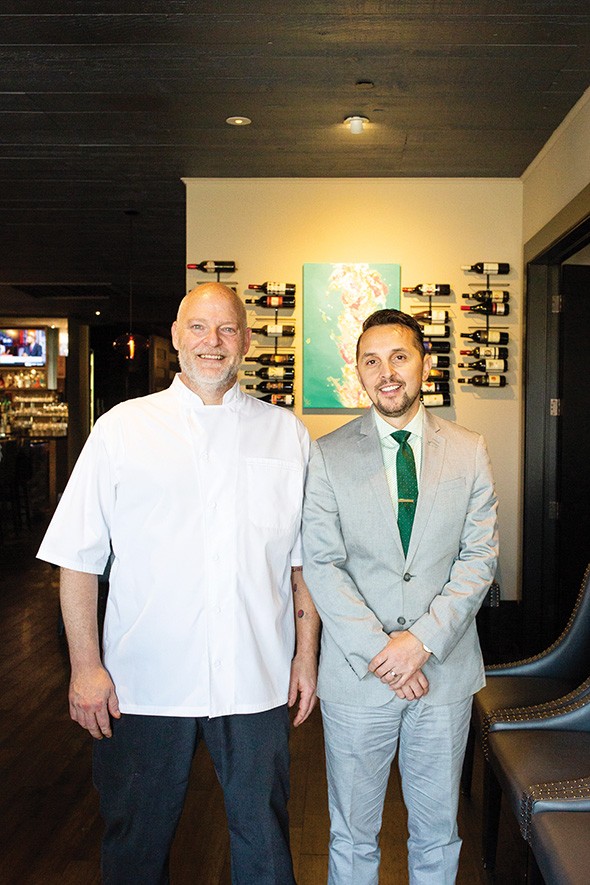 “We make our fresh pasta in-house,” he said. “We make all our fresh sauces in-house. All our desserts are made fresh in-house.”

Bill Forster serves as the restaurant’s head chef, bringing years of his own experience in various kitchens to Piatto.

Forster started cooking in 1981 at an Oklahoma City pizzeria and later attended culinary school at L’Academie de Cuisine in Gaithersburg, Maryland. He then worked at La Luna Blu in Enid and, following that, had a restaurant of his own called Rooster and Wine. Most recently, he served as chef at Royal Bavaria in Moore.

“It’s been great, actually,” Forster said. “When [Mullaliu and I] first met was at the interview. That was in late June, and since then, I’ve felt like I’ve made a really great friend. Things are going really well.”

Mullaliu has now seen the restaurant business from almost every side and has adapted quickly to his new role as owner and maître d’. And as a longtime resident of the Oklahoma City area and a fixture of the dining scene, he has amassed something of a following.

“I met a lot of people through the years, and they’ve been nothing but supportive through the whole time,” Mullaliu said. “It doesn’t matter what I did — Coach House or Vast. They are very supportive. They have been showing a lot of support. And I’m very thankful that I invested my time in Oklahoma, and Oklahoma is returning the favor to me with the new adventure.”

Mullaliu has also had the unique opportunity to see the city grow and change, both in cuisine and culture.

“It’s a lot different,” he said. “Lots of new places opening up. I think it’s good for Oklahoma. It’s definitely good. A lot of local restaurants open up, and it’s weeding out the big chain restaurants.”

His parents arrived in 1998, and Mullaliu followed in 2000 after living in London. He initially experienced some culture shock in Oklahoma, especially with the lack of public transportation at the time.

Despite this, he has never considered moving away.

Forster, who has lived around the country and moved away briefly in 1994, agreed that Oklahoma City is thriving.

He said around the time he left for culinary school, The Coach House and The Metro Wine Bar & Bistro, 6418 N. Western Ave., were among the few elevated dining experiences customers could find. (Chef Fleischfresser was involved in both endeavors.)

“They’d barely got Bricktown started back then,” Forster said. “The best restaurant down in Bricktown was Spaghetti Warehouse.”

Mullaliu said the process for renovating his new space was fairly straightforward.

Piatto features chic décor, which Mullaliu has updated with accents that reflect his personal taste. Pendant lights above the low-top tables are from New York and hand-blown. Colorful abstract artwork by local painter Jennifer Whorton Husmann adorns the walls.

Mullaliu also has plans to replace the chandelier above the U-shaped bar, wanting something a bit more classic and true to his style.

Several rooms in the restaurant can accommodate party sizes up to 50 people. The spaces are already being booked for private events.

“So far, it’s been good,” Mullaliu said. “Just the word of mouth has been good for us. People have been liking the food.”

Mullaliu said Piatto will celebrate the upcoming holiday season and will likely be open for holidays like Thanksgiving and New Year’s Eve, probably offering a prix-fixe menu.

“New Year’s is really big in Europe, so we celebrate a lot,” he said.

Mullaliu, who is married with a 21-month-old daughter, said he considers Piatto to be a family-run business.

Piatto is open for dinner starting at 4:30 p.m. Monday-Saturday.