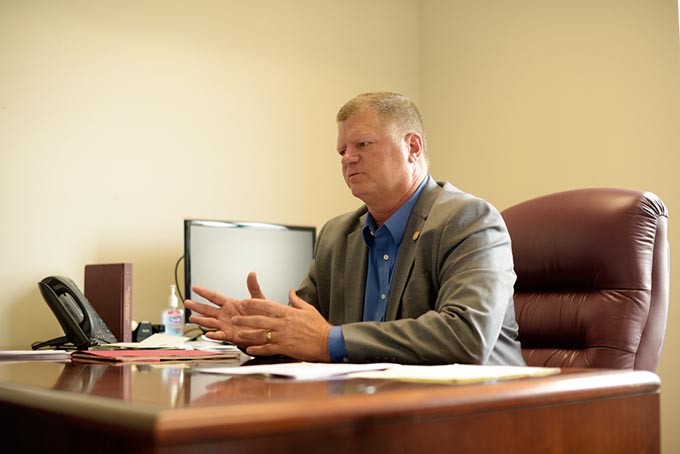 When Todd Stone joined the Oklahoma City Council in April, he not only brought expertise from running his family’s south OKC business to the nine-member council but a unique insight into what residents want.

On the campaign trail, from constituents’ doorsteps and living rooms, he heard over and over again a desire to see streets repaired.

“I am really interested in seeing streets get a shot in the arm,” Stone told Oklahoma Gazette during a recent interview in his office at City Hall.

As the winner of a runoff election against former state Rep. Richard Morrissette, Stone — the council’s newest member — was sworn in as the Ward 4 council representative on April 11. Ward 4 covers a huge swath of southeast OKC that borders Moore, Midwest City and Choctaw.

“I think we would all like to see the streets we drive on every day improve,” he said. “There will always be streets that need improvements — and we do have some great streets — but we’ve all hit a street and thought, ‘This is terrible.’”

What Stone heard on the campaign trail is not unique. OKC residents consistently list street improvements as their top concern on the city’s annual resident survey.

Stone enters the council at a critical time as council members are at work shaping a GO bond program to benefit the city’s infrastructure, along with the beginning stages of planning a new MAPS campaign.

The Ward 4 councilman recognizes the important decisions he will make early in his four-year term.

Stone supports the mayor’s MAPS proposal and calls to invest in streets and public safety. During the Gazette interview, Stone reflected on his new role as Ward 4’s councilman and discussed his priorities.

Oklahoma Gazette: As the new Ward 4 councilman, you are coming into an office held by Pete White, who served on the council for three consecutive terms. Did Councilman White pass along any advice or words of wisdom to you? Stone: Before I was elected, I met with Pete. He has so much history with the city, serving for close to 20 years. I think I would be remiss if I didn’t reach out to him for the history of different projects. Being able to go to somebody and find out the details about what’s important and what’s not important has been very helpful.

OKG: You represent a very diverse area from urban to rural residents. What’s your approach to connecting with your constituents when they are so diverse? Stone: When I was growing up, my great grandmother lived on SW 29th Street. The first house I ever bought was around SW 31st Street. When I get into that area around La 29 (SW 29 District), I feel at home. Right now, I live in a more rural setting. When I go to the rural areas of Ward 4, I feel at home too. Between my upbringing in Oklahoma City and where I live now, it mirrors the complexity of Ward 4, which is both a rural and urban area.

OKG: What are some of the Ward 4 projects or initiatives that you are excited to take part in? Stone: There are a lot of exciting things going on in Ward 4, starting with Capitol Hill. There is a resurgence coming along there as well as in the SW 29 District. You look east to Tinker Air Force Base and see many events surrounding the anniversary.

At [Stanley] Draper Lake, fairly soon, we are going to be breaking ground on trails around the lake. I am really excited about what else we can look into to contribute to the additional use of Draper Lake. The area around Interstate 240 and Sooner Road is seeing new developments.

OKG: What have you taken away from your first four weeks on the job? Stone: I have been so impressed when meeting city staff and gaining awareness around both private and city programs. There are so many amazing people over there who have a love and passion for this city. It really makes you feel good. You know the city is in good hands.

I do the research before I cast any votes. I have talked with some of the other council members to get more details before a vote. It is a beautiful thing when you realize everyone is pulling in the same direction. We all want Oklahoma City to be as good as it possibly can be. While we might have different views on how to reach that point, we all know everyone has the same end goal and we can have discussions with respect. Everyone has the city’s best interests in mind.