Chances are high that someone will sing a song by The Righteous Brothers.

“So, Top Gun is my favorite movie. Has been since I was a kid,” said co-organizer Andon Whitehorn. “Dad was in the Navy and all.”

“Andon and I are friends in the industry,” Poulin said. “He and I were sitting at one another’s bars and started quoting Top Gun.”

At first, Whitehorn and Poulin considered hosting a crossover between the bars but took the idea to Mains, who recently took ownership of Timeout. Eventually, the space will be remodeled and become a new bar, Rum Rebellion. Until then, Mains has fun creating different pop-up bars.

“Andon and Colby are handling the drink recipes; I know they’ve been working on them a couple of months, … and we’ll have Top Gun-themed music and sing-alongs,” Mains said. “The drinks are going to be fantastic. They’ve done an amazing job at cleverly tying things together. It’s going to be a tongue-in-cheek good time with serious cocktails.”

Mains said combining craft cocktails with a fun theme drains the pretentiousness out of the scene and hopefully draws all kinds of visitors to Bricktown. 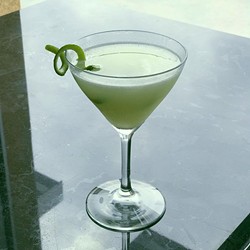 But that doesn’t mean these cocktails don’t fully reflect the themes of the film.

“Miramar is where Top Gun is set, so the idea for that cocktail is that it’s ‘hot, dry, and pretentious,’” Whitehorn said. “Buzz the Tower is a play on a Bee’s Knees with Szechuan peppercorn for an electric buzz on your tongue.”

In his Take My Breath Away cocktail, Whitehorn uses a wasabi simple syrup that gets hotter the more it’s aerated.

“And my favorite is the MiG-28. In the movie, the MiG-28s are actually just F-5E Tiger IIs painted black and given a Soviet-esque red star,” he said. “So the MiG-28 cocktail is an Aviation with black food coloring.”

“We’re creating a cocktail to that quote or area or whatever’s going on in the movie. It’s not just putting names on stuff,” he said. “We want a good meaning behind it.”

At some point, Mains would like to make pop-up bars like Top Gun monthly or bimonthly events with a portion of proceeds going to charity. Part of the Top Gun pop-up’s proceeds will benefit Veterans for Peace, a nonprofit organization with a mission to build a culture of peace while showing people the true costs of war.