Doyle Wolfgang Von Frankenstein avoids the past and rails against Spotify. 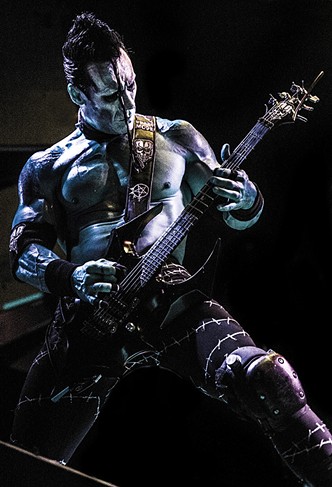 Namesake notwithstanding, Doyle Wolfgang Von Frankenstein doesn’t seem fond of digging up the past. In 1980, at the age of 16, the guitarist, born Paul Caiafa, joined his brother, bassist Jerry Only, and frontman Glenn Danzig in The Misfits. The band, a seminal influence in both hardcore and metal, broke up in 1983 and, after a legal battle, reformed without Danzig in 1995. Only and Doyle reunited with Danzig for a few shows in 2016 and played together in their home state of New Jersey in May, but Doyle doesn’t want to talk about any of that.

“Any question about The Misfits will be answered with ‘No comment,’” warned an email from Doyle’s publicist Tom George.

In 2005, Doyle formed Gorgeous Frankenstein, a band that would eventually include Cancerslug vocalist Alex Story. (Questions about Gorgeous Frankenstein were also labeled “off limits”). Story, who serves as lyricist and frontman, and Doyle renamed the band Doyle in 2013 and released the album Abominator. The instrumentals for 2016’s As We Die were recorded at the same time, as was enough material for a yet-to-be-released third album. Doyle (the band) is scheduled to play Saturday at 89th Street OKC, 8911 N. Western Ave. Resurrecting old famous monsters clearly wasn’t an option, but we talked to Doyle (the man) about his creative process, his record label, Monsterman Records, and why he really, really hates what the internet has done to the music business.

Oklahoma Gazette: I read you’ve already recorded enough material for a third Doyle album. Is that coming out anytime soon?

Doyle: It’s not coming out anytime soon, but we’re working on it. I’ve got a bunch of stuff I’ve sent Alex to try to work on.

OKG: It seems like it’d be tough to balance recording with your heavy tour schedule.

Doyle: I hate recording. It’s so time-consuming and so precise. I like writing and I like touring, but recording, it’s too much.

OKG: Do you just try to get it over with? It seems like you record a lot of stuff at one time.

Doyle: That’s why I’m over it.

OKG: That makes sense, I guess. I’ve never really heard of someone recording what amounts to three albums’ worth of material in one go.

When you write with Alex Story, you could you could probably do 10 albums a week if you really wanted to. He writes so fast. He’s a song machine.

OKG: Have you learned anything about the music business from having your own label?

Doyle: The only thing I know about the music business is that there’s no business. Nobody knows what they’re doing.

OKG: Do you have to bring your own food on the road? It seems like it’d be impossible in a lot of places, Oklahoma City for example, to eat vegan after a show.

Doyle: Why would you say that? There’s apples, oranges, bananas.

OKG: Sure. That makes sense. Does the material on Abominator feel different to you than the songs on As We Die?

Doyle: I mean, no, not really. I think it’s cool that As We Die has a real drummer on it [Brandon Pertzborn] … [but] There’s little difference between the two in my mind. I guess, I don’t know. It all sounds the same to me. When Zakk Wylde writes an album for Ozzy, Ozzy inspires what the album is, but it sounds like Zakk Wylde because Zakk Wylde is writing it.

The only thing I know about the music business is that there’s no business. Nobody knows what they’re doing.Doyle Wolfgang Von Frankenstein tweet this

OKG: Do you draw inspiration from horror movies when you’re writing music, or are you just thinking about the music?

OKG: How about horror music soundtracks?

Doyle: Just in general, the thought of a horror movie soundtrack, I would say.

OKG: Do you ever have themes in mind for the songs you write or a story behind them?

Doyle: It’s added later — that’s Alex. It’s not about anything until he writes it.

OKG: So where do you draw inspiration from?

OKG: Anytime you pick up a guitar, you have in mind that you might write a song?

Doyle: I try to every time. I don’t sit there and play the other songs because why would I do that?

OKG: I mean, I guess to practice.

Doyle: Practice is a wasted show, my friend. I totally believe it.

OKG: So if you pick up a guitar, it’s either to write something new or to play a show?

OKG: Is there anything you want to add that we didn’t talk about?

Doyle: Yes. I would like everyone to stop illegally downloading music because you’re destroying this business. That’s why we have to do meet-and-greets every night just so we can eat while we’re on the road. You don’t understand that you’re stealing our product. It should be a fucking crime, and it should be a fucking crime to steal one fucking song. It’d be like walking into a fucking motorcycle factory and taking a motorcycle. That’s a fucking crime. These songs are our products. Destroying the business. And then you got fucking jerk-offs like fucking Spotify ripping us off as well. Fucking bullshit. You get a fraction of a penny for x amount of fucking plays. What the fuck is that? If you can’t pay for our songs, then you shouldn’t fucking have them. We do the world a justice by fucking entertaining them. We’re not wandering fucking minstrels. We’re trying to fucking make a living here, and they’re fucking it all up. They think we’re all fucking millionaires here, and we’re fucking not. You steal songs and then we all gotta go get jobs and now you don’t get no more songs from those bands because we can’t fucking afford to do it.

Tickets are $15-$18, available at 89thstreetokc.com. Oklahoma acts Spooky Fruit, Paid in Spades and Justice Keeper share the bill. VIP meet-and-greets with Doyle are available for $50 at monstermanrecords.myshopify.com.