Math teacher Thomas Kelemen raised his voice over the light chatter of his students.

“Can anyone simplify quality A?” he asked.

Elajah, an eighth-grader at Oklahoma Centennial Mid-High School, volunteered to give it a try and walked up to the SmartBoard in front of the classroom.

“Like this?” she asked when finished writing a series of numbers that look foreign to anyone who is at least a few years removed from a middle school algebra class.

After a few hints from Kelemen, Elajah finished the problem and walked back to her desk with a shy but proud smile.

The classroom scene showed an energetic yet engaged class of students; a teacher who wears his passion for teaching on his face; and a school that is clean, secure and filled with students learning the same lessons as thousands of other students across the state.

However, Centennial has been marked as an F school by the State Department of Education, a designation claiming the school is one of Oklahoma’s worst.

“We are not an F school,” said Jay Green, a student council member at Centennial.

Green helped lead a handful of lawmakers — who accepted an invitation from the Oklahoma City Public School district to tour three F schools — around Centennial.

Green’s tour group walked down a hallway past a sign that reads, “Prove them wrong.” That is what school officials hoped to achieve during Wednesday’s tour.

What is an F school?

The A through F grading system for schools was approved by the Legislature in 2011 and rolled out amidst deep criticism from many school officials across Oklahoma, including some in the OKC school district.

“I don’t believe there is any such thing as an F school,” OKC Superintendent Rob Neu said before Wednesday’s tour. “It’s too focused on a particular snapshot, and it’s really math and reading. I want [lawmakers] to see how great our kids are and what passionate and committed educators we have.”

Attendance, graduation rates and other factors are calculated to issue a letter grade for schools, and the formula has been adjusted since its launch a few years ago. The letter grade system replaced a number rating that letter grade supporters said was too complicated for parents to understand.

Critics of the letter grade system believe it unfairly labels a school, crushing the morale of students and teachers and giving parents further incentive to abandon urban schools.

New State Superintendent of Public Instruction Joy Hofmeister has also been critical of the letter grade system, calling it “invalid and unreliable.” Hofmeister joined the tour during its stop at Jefferson Middle School and said it was important for lawmakers to address the letter grade process.

“They label them with a letter grade that doesn't tell the whole story,” Hofmeister said. “We need to make improvements so communities understand what is really happening inside the buildings.” 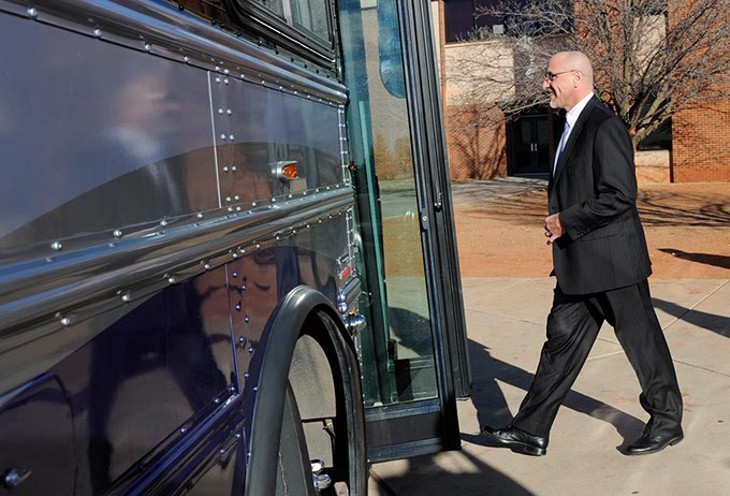 At Jefferson, Principal Greg Frederick told a group of students gathered in the cafeteria that their F grade was not a mark against them.

“[The F grade] says less about our students and our teachers and more about our ZIP code,” Frederick said.

Nearly all Jefferson students qualify for free or reduced lunch, and a majority of students are Hispanic and speak Spanish. However, Frederick can point to many bright spots in his school, including its 94 percent attendance rate, fine arts courses and a dance team that recently won a national contest.

“We are moving in the right direction,” Frederick said.

Just two state lawmakers and a councilman from Oklahoma City and Midwest City, along with several school board members, were in attendance for the tour. Neu said he would have liked to have seen more participation but vowed to hold more tours in the future.

Student-led tours were a big part of the event, allowing students to give their own perspective of what their school is like.

“We might not have everything that other schools have, but we have integrity, respect and a lot of values that maybe a lot of other schools don’t have,” said seventh-grader Saul Milan.

Milan said Jefferson lacks enough band equipment, some classes are in portable rooms and its high number of Spanish-speaking students can pose challenges but he had pride for Jefferson and the students did not deserve the F grade.

“A lof these kids just want their voice to be heard,” said Heather Messer, an assistant principal at Jefferson. “These students have a voice that matters.”

Rep. Mike Shelton, D-Oklahoma City, was one of the legislators that attended the tour and told school officials it was important for the state government to reevaluate how it addressed public education in Oklahoma.

Besides revisions to the A through F report card — if not a complete removal — school officials are hopeful lawmakers will approve additional funding, consider the impact charter school legislation would have on public schools and reject trigger laws that allow parents to essentially take over a school.

“We have a lot to get done,” Neu said. “But I wanted [lawmakers] to see we are doing a lot right.”