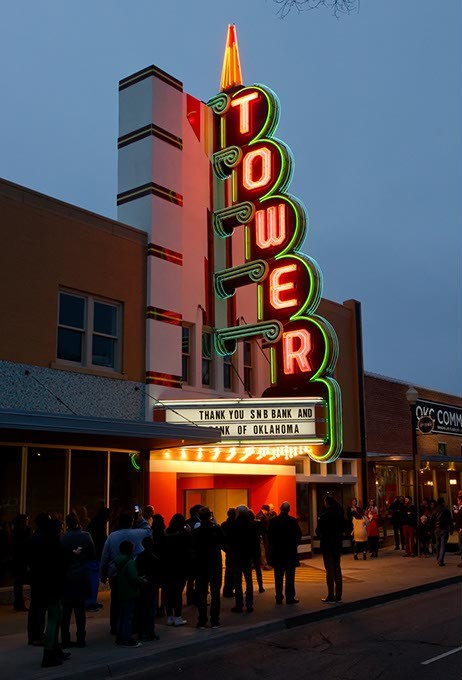 The lights went on a little early, but the crowd around Tower Theatre developers Jonathan Dodson, Ben Sellers and David Wanzer whooped and applauded nonetheless — partially because it was good to see the neon sign shining brightly again at 425 NW 23rd St. and partially because they were excited to get in out of the cold earlier this month during an event celebrating the relighting of the venue’s trademark marquee.

Wanzer told the gathered crowd how excited the developers were to bring the 1937 landmark back to life before the trio led more than 100 curious folks across the street and into the rejuvenated building for a first look at its theater and available office spaces.

Seeing so many people excited just for a peek inside was thrilling, Dodson said, but knowing what’s to come is even better.

With 4,000 square feet on the bottom floor reserved for restaurants, Dodson said one, two or even three food concepts could move into the space.

Work continues on the actual theater. Seats are being installed on the mezzanine level, and a few other finishing touches — fixing the stage and drying the orchestra pit — will be completed before Levelland takes over. Dodson said he thinks the first in-theater event could take place as early as mid-April.

“It’s crazy,” he said. “Selfishly, I’m excited. I have friends in the area who can walk to a concert and spend all night on 23rd Street. I never would have dreamed it when we first came here.”