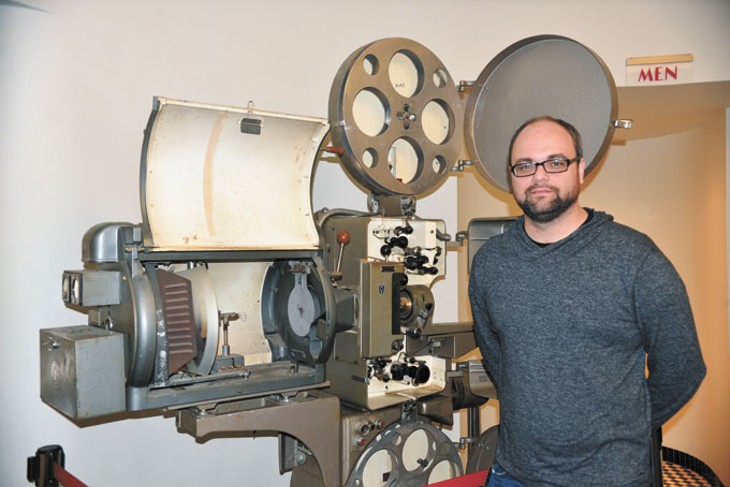 Tower Theater, 425 NW 23rd St., opened for the first time since 1999 this May with a series of concerts, but it did not fully return to its roots until a showing of 2001: A Space Odyssey in November.

Operators Chad Whitehead and Stephen Tyler have brought the historic building back to life following a two-year renovation, but the plan is to make it not only one of the city’s premiere concert venues but also a beacon for classic and independent movies.

Tyler has paired with Caleb Masters, who runs the local film blog The Cinematropolis, to host pre- or post-show events to provide extra context to classic movies. Masters hosted a pre-show discussion for Dr. Strangelove or: How I Learned to Stop Worrying and Love the Bomb on Dec. 1.

Masters also hosted a pre-show interview with Oklahoma producer Gray Frederickson for his 1983 Oklahoma set and shot adaptation of The Outsiders last Tuesday.

The Dec. 1 showing included a post-show party at nearby Bunker Club, which includes the quote “How I learned to stop worrying and love the bomb” on its Cold War-era themed walls. The Outsiders showing concluded with drinks at The Ponyboy, a new bar nearby that takes its name from the film.

“As much as we can, we want to turn these film screenings into little events to educate and get people excited about film,” Tyler said.

Masters will host a discussion prior to a Dec. 12 showing of Guillermo del Toro’s Pan’s Labryinth, which follows the release of del Toro’s latest film, The Shape of Water.

“Pan’s Labyrinth is a personal film for Del Toro and takes the best things about him — passion for people, history, fantasy — and put into one masterpiece,” Masters said. “The second we all finish watching that, I think we will want to go watch [The] Shape of Water.

“At a big movie theater, the (price difference between 2K and 4K) is enough that it makes sense that not every room is in 4K, but we only have one screen and we’re already committed to high quality, so let’s not break stride,” Tyler said.

Tyler said the plan is to one day restore the theater’s original Phillips Norelco DP70 projector, which was the first to have the ability to show both 35mm and 70mm films.

The projectors were installed in the theater in 1963 and remained in use until 1986. By the time the theater closed, it was a far cry from showings of Doctor Zhivago and Cleopatra when it was used to show adult movies.

“Whatever was the last thing played, I don’t think anyone cared about the name of it,” Tyler said.

Tyler has taken responsibility for booking classic films, which sometimes means tracking down new distributors as films rights have transferred from studio to studio over the years.

Tower pays a small licensing fee and then splits ticket sales with the distributor. Tyler gets free rein to book the theater for movies about two months in advance, after the window has closed for it to be booked for concert.

Sometimes films will be taken out of rotation. Tyler wanted the original Blade Runner to be Tower’s first showing, but the studio took it out of rotation until January to prevent it competing with the release of the sequel Blade Runner 2049. James Cameron’s Titanic is not available this year because a remastered version will receive a wide release for its 20th anniversary.

During the process to open the theater, Tyler said he would be bombarded with stories of people around town who had a connection to seeing movies there.

“It’s awesome to think that what we’re doing now will trigger people’s memories in 20 years,” Tyler said. “It’s cool to have this place and have people making memories.”

Tyler sees a future where the theater is home to critically acclaimed independent movies that do receive a wide release, such as 2017’s Lady Bird.

“There are a lot of films that cinemaphiles might now about, but I want to help people understand that there is more than just blockbusters and huge multiplex experience,” Masters said.

Tickets to each showing are $10, and popcorn and drinks (including beer and liquor) are available for purchase.

Print Headline: History returns; Tower Theatre goes back to its roots and hopes to become a beacon of classic and independent films.