“We’re playing very differently, a lot of new techniques,” said rhythm guitarist Gabriela Quintero. “[Lead guitarist Rodrigo Sanchez] played simpler on all the solos and all the lines because he was a little too under pressure to play a lot of intricate stuff and he just wanted kind of to relax, a little bit more chill. For me also, it was a lot of very simple stuff on the guitar — arpeggios, stuff like that. It’s simple to play, but there was a moment that I couldn't even play it because I was used to playing so much complex stuff that all the simple things, they became challenging for me. So I just kind of had to practice the basics of the guitar.”

Quintero and Sanchez have been playing together for more than 20 years, first in the mid ’90s in Mexico City heavy metal band Tierra Ácida, then as a duo playing a coastal resort in Ixtapa. At the end of the decade, they moved to Dublin to perform as buskers before topping the charts there in 2006 with their self-titled debut, which featured Led Zeppelin and Metallica covers alongside original flamenco-infused freakouts. But following 2014’s 9 Dead Alive, Quintero said, the duo felt stuck.

“We were under pressure to come up with new music for a new album,” Quintero said. “We were just writing so much music, and some of the music sounded like the first album. So we said, ‘No, no, no. Let's bring more different elements,’ so we experimented quite a lot with drums and bass and pianos, and it sounded way too extreme. It sounded like completely another band that was far away from Gabriella and Rodrigo altogether. … At some point, we finally found the key to unlock this new creativity; now we just decided not to go onto the road of pleasing people or following the advice from the industry about how everything needs to be super catchy, very short. … There was a moment we realized that we're not that, so we're going to keep authentic to ourselves. We reconnected with that, then we got momentum.”

“We just decided not to go onto the road of pleasing people or following the advice from the industry about how everything needs to be super catchy, very short.”
—Gabriela Quintero tweet this

Even with that momentum and a natural creative chemistry developed over decades, Quintero said, finding the right notes took considerable effort, especially since the duo decided to take on the ambitious challenge of covering Pink Floyd’s “Echoes,” the epic and experimental sidelong song from 1971’s Meddle.

“When you are practicing in the same room and coming up with a new arrangement and all that stuff, everything you start to see clear,” Quintero said. “For example, we were trying to work on ‘Echoes,’ and it required a lot of very minimalistic guitar for my part, very simple rhythm, very simple lines — nothing crazy, nothing flashy. And then also, what Rod was coming up with was also minimalistic, just the right notes here and there to just keep it very elegant. But we were both working on the arrangements, and then all of these sort of little bits of alignment came in that just happened to work precisely … but also it requires a lot of practice — and practice upon practice.” 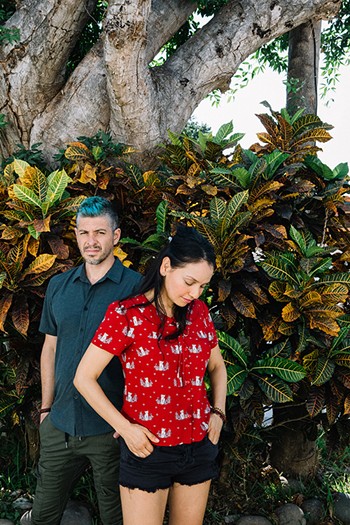 Some of the newfound clarity might be credited to meditation.

“Rodrigo and I, we’re a kind of hyper type people,” Quintero said. “We'll move a lot; we’re restless, so meditation brings us a way to just calm down, take everything in its own time, so probably that makes us play less crazy. Although, in my view, I’d like to come up with new music in the future that is less crazy, so we probably need to meditate more.”

Though Rodrigo y Gabriela have sold more than 1.5 million albums and have played at Radio City Music Hall, Hollywood Bowl and London’s Royal Albert Hall since working as buskers on Dublin’s Grafton Street, Quintero said she remembers a valuable lesson from those early days.

“We were under so much pressure being in a foreign country and not speaking the language, and we ran out of money,” Quintero said. “For us, it was the only thing that we could do good. So we would just go out and hope that people liked us and hopefully people gave us something. … It just made me focus so much. I never was so focused in my life. … In the metal band, only our family and friends sort of listened to what we're playing, and then when we were doing covers in Mexico in the tourist resort, it was more like a song set for honeymooners and nobody really listened to what we were doing. But when we got to Ireland, it was super cold; it was freezing; it was windy; it was so full of people, and it was scary. … But being so focused on the music made us perform really, really well, so I see every single stage as if I was walking on Grafton. Every single stage deserves that commitment and focus and presence.”