In college, Black Violin’s Wil Baptiste and Kev Marcus studied classical music during the day and made hip-hop beats at night, but the duo didn’t initially think to combine them.

“At the beginning, they were really separate,” said violinist Marcus. “It took a while for us to figure out how to blend them together because at the beginning, hip-hop and violin didn’t even make sense to us. … We’d play these beats for all these up-and-coming rappers, and they’d come in and be like, ‘Man, that’s fire. That’s great.’ Then we’d go in the other room and grab our violins and start playing our violins on the beat, and they were like, ‘What is that? How did you do that?’”

“We were like, ‘This is so easy. Why don’t we just put a CD together and do this over and over on all kinds of songs?’” Marcus said. “It was the simplest thing in the world to us, and people would just lose their minds over it. We were like, ‘Hmm. How can we make money doing this?’”

Following 2012’s Classically Trained and 2015’s Stereotypes, Take the Stairs, released Nov. 1, marks about 17 years of incremental progress from that point, from making beats in the college library to playing President Obama’s 2013 inauguration.

“It’s for everyone, but it’s probably our most mature album,” Marcus said. “We’re older. We’re wiser. We’re saying more with it. We’re a bit more socially conscious, and we use our art to speak to that more than we ever did before. I think we expect more out of ourselves as artists and as men, and we want to use our platform to spread positivity more than just make music and make noise.”

In addition to celebrating that progress, Marcus said, Black Violin wants the new album to serve as a reference listeners can return to for renewed inspiration in their own lives, the way he continues to read Sun Tzu’s The Art of War.

“It’s really about hope and the idea you can do anything you put your mind to,” Marcus said. “It’s not necessarily an in-your-face kind of thing. It's just supposed to make you attack every single day with intention and with effort. … Basically, it’s a metaphor of our career. … It’s been this long, tough road that we’ve taken, and we like to think of it as taking the stairs.” 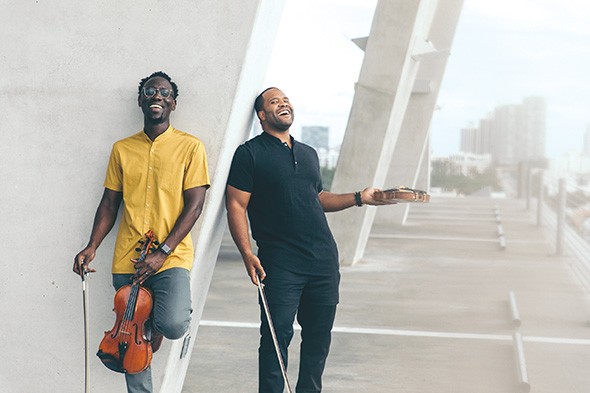 “There are still performing arts schools,” Marcus said “but from our travels across the country, we’ve learned that these schools are farther and fewer in between, and schools that aren't necessarily art schools, they don't have art. They don’t even have PE … so I think that budget cuts are affecting everything, but art seems to be the first to go.”

Basically, we're trying to connect the dots,” Marcus said. “When I was a kid, I grew up in the inner city, didn't have an instrument, didn't have access to private lessons, but I was always very talented, and someone noticed that and helped me get an instrument when I was in 10th grade. That's so important for a violinist. You’ve got to have a really good instrument to really be able to grow. That was crucial for me. I got so much better when I got that instrument. It kept me going. Senior year came, and they got me private lessons too, and those private lessons turned into a full scholarship to college, which later turned into Black Violin. Wil and I have similar stories of not just being talented and in the right place, but of someone helping to make sure that we have the best chance to succeed. That’s what we want to do with our foundation.”

Developing the right method for combining the classical music their instructors introduced them to with the hip-hop they listened to after class took Marcus and Baptiste years, but listeners of different ages and backgrounds instantly appreciate it when they hear it.

“Most of the time, I think that people are just super receptive to it,” Marcus said. “We had a moment in the show last season where we were playing Mozart’s 40th symphony, but we mix it in with Cardi B’s “Bodak Yellow.” We’re playing a trap version of Mozart’s 40th … and the DJ drops in the a cappella [verse from “Bodak Yellow”]. If you only know about Mozart and you’re not really into Cardi, don't even know who she is, you won't even hear that part really. That won’t be what draws you in. You’ll be sitting there listening, like, ‘Wow. This Mozart’s so beautiful,’ and next to you, you’ve got the 8-year-old girls like, ‘If you wanted to / These exclusive / These is red bottoms.’ It’s two different people sitting at a concert having completely different experiences, but they're listening to the same thing. And I think that took us a while to kind of understand that formula, that mix, that proportion. Because if you go too far either way, it’s exclusion. You use both. It should be right down the middle. We’ve got to walk a tightrope, where we mix things together so that if you’re really into the classical, it’s there for you; if you’re really into the hip-hop, it’s there for you.”

However, the latest trends in hip-hop can be difficult to incorporate into classical playing.

“When we started, hip-hop was just so different,” Marcus said. “Everybody was sampling old jazz records or old R&B records, that kind of thing. It had a melody to it. … Hip-hop lacks melody now. It’s just kind of a lot of mumbling. … I’m like, ‘OK. You’re not really giving me any notes to play here.’  I like it, though. It gets me crunk in the car, but it's hard for me to do what we've always done with this art form in this way.”

But Marcus said Black Violin won’t chase trends any more than it will bow to traditional expectations. The duo is on track to play 137 shows this year, at universities, theaters and concert halls across the country, but rather than tailor each show for specific cities or venues, Black Violin plays to its own rhythm and lets listeners catch up.

“We don’t conform,” Marcus said. “We don't want to change it. We make every audience we come across change their perception of what they were going to see, and we're not trying to make it easier or cop out.”