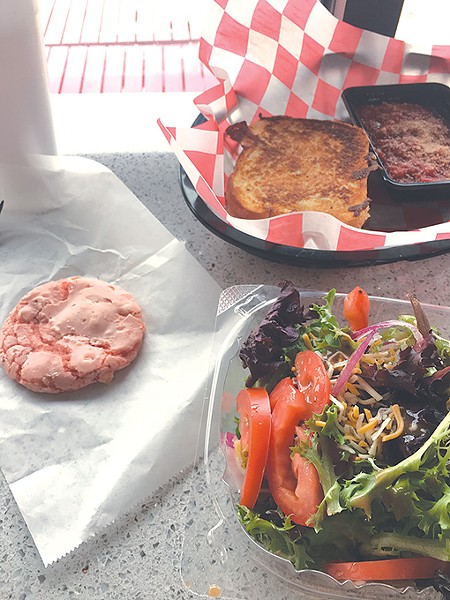 Film Row has undergone a transformation the last few years with the opening of the 21C Museum Hotel, The Jones Assembly and more. Biding its time as construction blocked traffic, Caeli’s Sweets, Eats, & Bar has come out the other side.

Located at 726 W. Sheridan, Caeli’s is the brainchild of brothers Kenney and Kyle Harris and their mother Gina, whose name in Latin is the inspiration of the restaurant.

Caeli’s (pronounced “Chaylee’s”) came as a lifeline for Kenney Harris, who began his career as an oil and gas engineer.

“So when oil and gas tanked, we decided to look for something new,” Kenney Harris said. “It was a timing thing. I saw the spot, liked it and then one day, I thought, ‘Let’s put a restaurant there.’”

He enlisted his brother and mother to come in as co-owners. Gina Harris operated a catering business as he was growing up. Through high school, Kenney Harris remembers putting together meals for Oklahoma Pork Council and other clients.

The Harrises’ experience in catering allowed Caeli’s to thrive even when there wasn’t much foot traffic to the restaurant due to construction and lack of other eateries on the block.

“Our lunches break the place even, and catering is main step,” Harris said, noting that they’ve built a rapport with pharmaceutical drug reps and doctor’s offices.  “A lot of restaurants will just set the bags down. We set everything up, take all the lids off — that way they don’t have to touch anything or drag in anything from their car.”

Caeli’s has a full liquor license at its restaurant and for use in catering.

Ahead of the curve

Its menu has evolved since opening in May 2015. Meatballs have been a staple, as well as Italian sandwiches, but Harris said that the biggest boon came when he added the traditional Hawaiian dish poke.

Essentially deconstructed sushi, a poke bowl combines marinated raw tuna or salmon (if you order Caeli’s shrimp poke, it is cooked) with rice, vegetables and a slightly spicy sauce. Harris got the idea after traveling to Houston for the wedding of one of his best friends, who is Hawaiian.

“[My friend’s] cousin and wife and niece own a poke restaurant in Houston,” Harris said. “I consulted with them about it. I thought I could do it.”

It has become one of Caeli’s most popular menu items. The poke bowl ($12) is an affordable way to eat light when you’re downtown. Harris said that they pick up fish fresh every morning and they usually run out of tuna by 2 p.m.

Caeli’s was ahead of the poke trend in Oklahoma City. There will be three standalone concepts opening along 23rd street alone in 2018.

“I know there are a bunch of places popping up, but we set the standard,” Harris said.

While the poke is light and refreshing, Caeli’s other signature dish, a meatball grilled cheese ($7.50), is a much more continental take on a heartier dish. Meatballs have been on Caeli’s menu since its inception, but boredom is the mother of invention. Harris’ niece Caeli, who works in the restaurant in the summer, got tired of eating a meatball sandwich or salad every day, so one afternoon, Kyle Harris made a meatball grilled cheese with a mozzarella and provolone blend. 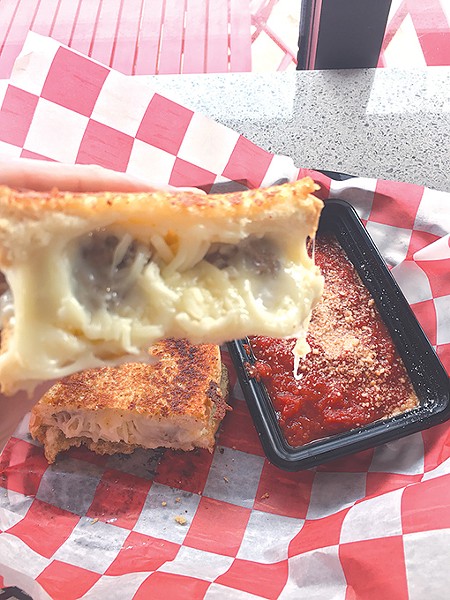 I’ve had poke on a few occasions in my life, and I know that Caeli’s version more than holds up to any that I’ve had in southern California, so on a recent visit, I wanted to try the meatball grilled cheese because it’s something I’ve never seen before.

It arrives as a whole sandwich filled with eight pork-and-beef meatballs and a side of marinara dipping sauce. The meatballs are very good, relying on the contrasting texture and fat content of pork and beef to provide good flavor and bite. Having the dipping sauce on the side was inspired because it keeps the bread crispy and your shirt clean.

“A meatball sub is great, but it gets all over you. If you’re downtown and you want something hearty like that, you eat the meatball grilled cheese without having to worry about getting covered in sauce,” Harris said.

I got a side salad ($3) with balsamic vinaigrette that had a nice mix of healthy greens to help offset the heaviness of the meatball sandwich, which I found to be the perfect size. It wasn’t so big that it ruined my afternoon, and the marinara was full of flavor. It was like a meatball sub found at popular chains, but 1,000 times better. I think the inside of the sandwich might benefit from a sprinkle of dried oregano and garlic powder, but that is a very minor complaint because the sauce provides those flavors.

Gina Harris handles the baked goods at Caeli’s, building off her catering business, where her son said she gained quite the following for her cakes. Caeli’s sells cake slices for $3 and will work with customers to build a full cake to their liking. Its most popular cake is a bourbon whiskey cake with bacon buttercream frosting.

On any customer’s first visit, they receive a free cookie. On my recent trip, I added a strawberry milkshake cookie. It was the right amount of tartness from the strawberry with additional sweetness from white chocolate chips and was very soft without falling apart.

As the weather warms up and construction on Film Row falls farther behind it, Caeli’s — currently open 10 a.m. to 5 p.m. — will be adding dinner service on Thursday and Friday with a brunch service on Saturdays in the coming weeks.

The Harrises will add a few appetizers and a pasta dish for its dinner menu, and the Saturday brunch was a hit when they first opened, but they had to stop when construction closed the street to vehicle traffic. The brunch menu will include a waffle with bourbon glaze, a French toast sandwich and smoked salmon, among other items.

“We’ve got a pretty expanded menu for just some people that started cooking in a little place,” Harris said.