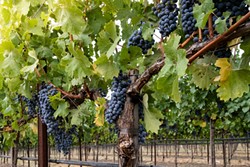 At age 73, Richard Kennedy is the self-proclaimed last sueño standing at Tres Sueños Winery & Vineyard, the Luther vineyard he cofounded in 1999.

“When we began, there were three of us, but now the others have moved on and opened their own vineyards, one in Slaughterville and one near Drumright,” Kennedy said. “There’s just uno sueño now.”

The solamente sueño invites the community to Luther to help harvest and stomp grapes over two weekends in August.

“Our grape stomp is open to the public, and people can come help us with the harvest,” he said.

Each guest is given a 5-gallon bucket and will cut grapes off the vine.

After brunch, guests fill a 4-foot-by-4-foot harvest bin with about a hundred pounds of grapes, and about four people at a time get in to stomp grapes.

“It’s an old-fashioned grape stomp,” Kennedy said. “Some folks will sing while they stomp, or dance, and when the stomp is done, lots of people stay with us at our bed and breakfast. We serve a post-harvest cheese-and-crackers plate later on and enjoy our wine.”

“We have several varieties of award-winning sweet wines,” Kennedy said. “We also make chardonnay, Reisling, cabernet, merlot and a wine from the native grape Cynthiana.”

Kennedy has made wine for more than 40 years. The Oklahoma City native started in 1973 and ran his first vineyard in Piedmont.

“[Tres Sueños has] five acres of grapes,” he said. “You can get about two tons of grapes per acre, but after the deer and raccoons take their share, we end up with seven or eight tons.”

He produces about 1,000 gallons of wine each year. Kennedy’s vineyard and winery is the second oldest in the state.

Tres Sueños wines can only be purchased at the winery. Kennedy used to work with a wholesaler to distribute them, but it became cost-prohibitive. These days, the best way to enjoy the labor of his fruits is to stop in for a free wine tasting noon to 6 p.m. Thursday through Saturday and go from there.

“We also sell local cheeses, which you can buy to go along with your tasting, or you can bring your own picnic to enjoy with your favorite wine, which you can purchase after tasting,” Kennedy said. “We are also pet-friendly. Lots of guests bring their dogs and cats along for a tasting.”

If you can’t make it to the wine stomp, Kennedy suggested visiting later this fall, when Tres Sueños hosts its annual wine festival. The single-day festival features food, wine and music by the band Pirates of the Plains.