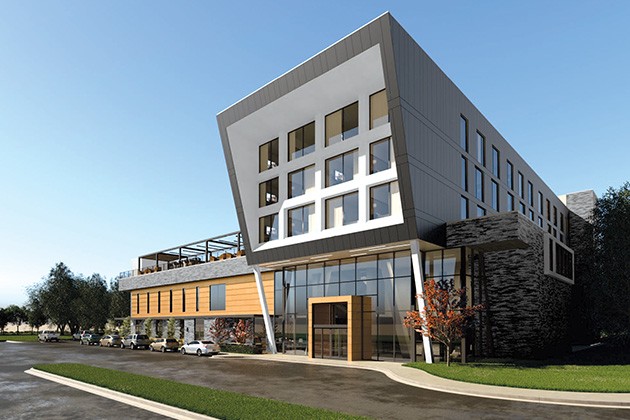 The Ellison Hotel, set to open in 2021, will stand in The Triangle at Classen Curve and work in partnership with Ralph Ellison Foundation. It will mark Marriott International’s first foray into Oklahoma under its Tribute Portfolio brand, which focuses on independent boutique hotels “rooted in their local community.”

The 75,000 square-foot hotel will house 120 rooms and feature a restaurant, 7,000 square feet of meeting spaces and a rooftop swimming pool and bar north of Whole Foods. Ryan Slater of Plains Management Group, a local hotel development and management company, said the hotel has been in the works for five years but really started picking up steam in the last two.

“We had a unique opportunity to bring something and really run it as independent but then have the benefit of Marriott and the rewards members that that will create for us and also their management expertise,” he said.

Slater and Jonathan Pitman are co-founders and managing partners of Plains Management Group, which they said is dedicated to Oklahoma City. Besides Marriott and their interior design firm, which is from Los Angeles, every partner is local.

“A lot of the development over the last decade has been focused on the core and downtown, and this is an opportunity to bring something unique and contemporary to … this side of town,” Pitman said. “The process just kind of started to snowball. We brought on a branding agency, and they helped us with the name. It’s really going to be Oklahoma-centric with our food and beverage partners and the name and some of the furnishings that people will see eventually.”

Local branding firm Cooper House came up with the Ellison brand for the hotel, and the restaurant will be led by local restaurateurs Chris Lower (Pizzeria Gusto, Back Door Barbecue) and Joseph Royer (Saturn Grill).

“When the board heard about this, they were so moved and so excited, and I will say that several of them were moved to tears.” — Michael Owens tweet this

“What we hope we accomplish is that it’s a place where people will come even if they’re not staying at the hotel,” Pitman said. “We really hope that people in and around the community will come have a drink, enjoy themselves, spend time on the rooftop.”

It was also important for them to showcase Oklahoma in a creative, positive light.

“For me, it was more exciting to showcase this Oklahoma side that maybe a lot of people didn’t know about. To all these travelers that aren’t from Oklahoma that are now coming to Oklahoma City that might have a perception that we’re all horseshoes and buffalos,” Slater said. “We wanted to change that perception somehow. … We want to create curiosity. It’s not always hit them over the head with an oil well. There’s other stuff like the writers that we’re talking about with Ellison and other things in Oklahoma — the artists, the murals.”

Groundbreaking for the hotel will happen before the end of the year with an estimated 14-month construction period.

Ralph Ellison was born in Oklahoma City in 1913 and attended Frederick Douglass School. An internationally esteemed author, Ellison is best known for his first novel Invisible Man, which describes a black man’s lifelong struggle to gain a sense of identity in a systemically racist nation.

Michael Owens, executive director of Ralph Ellison Foundation, said he was first approached by Cooper House designers to get his thoughts on the idea of an Ellison brand.

“They discovered us and had the fortitude to say, ‘If we’re going to do something like this, we need to get the institution that is the caretakers of his voice here in our city,’” Owens said. “When I met with them and they began to tell me about this amazing idea, I was floored with such enthusiasm and a desire to help in any way that I could to supplant Ellison and his legacy in Oklahoma City. Our vision as a foundation is to expand the work, the knowledge of Ellison to wider audiences. When the board heard about this, they were so moved and so excited, and I will say that several of them were moved to tears.”

After OKCTalk broke the news about the hotel, Ward 7 councilwoman Nikki Nice via Twitter questioned why it wasn’t being constructed where Ellison “roamed and truly knew.” Nice did not respond to a request for comment.

“We went back and forth. We knew that there could be some of that push and pull,” Pitman said. “We thought it was critical that we had [Ralph Ellison Foundation’s] blessing. … We’re sensitive to that conversation, and we understand those feelings.” 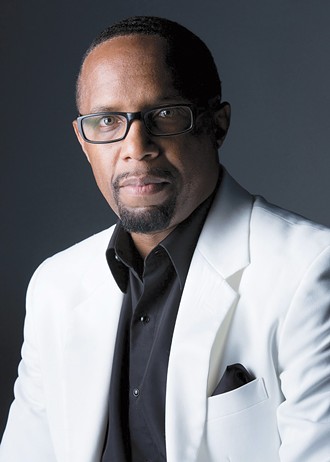 Owens, who considers himself a “guardian of [Ellison’s] legacy,” said he has no concerns about the hotel bearing his name in that location.

“That location is perfect for retaining the audience that we have and bringing them into spaces that they haven’t been, but also for reaching new individuals that don’t know about Ellison. That’s our mission. … We don’t fulfill our mission if we’re only reaching those that already know about him,” he said. “They could’ve named it anything. I think that’s what people forget. The location was already picked. This was a decision based upon trying to highlight the best of what we have that has come out of Oklahoma.”

The partnership between the foundation and Plains Management will allow the foundation to provide programming and events in a place they can truly feel at home, Owens said. The foundation plans to host writing workshops, jazz, poetry, open-mic events and its In the Light Bulb Room events, a series of forums on race and social issues.

“We will also do other events that bring people that wouldn’t normally be in spaces like that and areas like that,” he said. “We want to reach a diverse audience, and so we’re going to be programming like Batman in that place. It’s exciting because we finally feel like we have a home as a foundation.”

Owens, an avid “Ellisonian,” moved from Arizona to OKC to run Ralph Ellison Library simply because it bore that name. When he found out there was no foundation dedicated to Ellison’s legacy, he decided to make it happen. It was founded in 2014.

“That’s how the foundation came into existence, this need to keep his legacy alive,” he said. “Coming here to Oklahoma, I was really taken aback by how many people didn’t know Ellison and still am puzzled by the lack of knowledge surrounding his life and the imprint that he has made nationally and internationally. The depths of Mr. Ellison and his contributions to the literary world, to art, to music have yet to be revealed.”