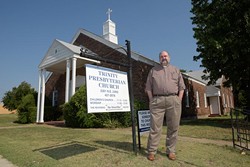 An Oklahoma City pastor is calling on believers and nonbelievers alike to help the church deal with a “600-pound gorilla in the living room.” A massive, unacknowledged primate in plain sight is only one of the metaphors Trinity Presbyterian Church pastor Rev. Richard Mize used to describe bigotry when discussing the church’s upcoming series of meetings on the subject, Facing Racism & Racists Anonymous.

The idea originated in Sunnyvale, California, with pastor Ron Buford, who began holding Racists Anonymous meetings at Congregational Church of Sunnyvale in 2015, drawing inspiration from the 12-step program Alcoholics Anonymous.

Mize said comparing racism to alcoholism is “not a perfect fit, but it’s really close enough to start the process and start the discussion.”

The northeast OKC church hosted a series of meetings called Racism & Racists Anonymous earlier this year. By following AA’s example of allowing open discussion and “sharing without fixing, without judging,” Mize said, participants were encouraged to be honest about charged topics.

“You try to talk to an idea instead of trying to argue with one another,” he said. “It’s a safe space to express awkwardly, stumblingly your experience. … There were a few times over the course of the meetings where people said things awkwardly that in another environment might have been really offensive — out of habit, out of custom, out of ignorance, and I mean classic ignorance, not stupid. You don’t know what you don’t know.”

Mize, who describes himself as “a rural Oklahoman from Sequoyah County” and a “recovering redneck,” said he shared his own personal history of ignorance at the meetings and learned to think more about his part in institutionalized racism as a result.

“I was a mild racist,” he said of his past. “Not because I’m mean, not because I’m evil, but because I was raised up to not even question the assumptions around me. … I was a flag-waver, a proud Southern white boy, you know, waving a Confederate flag, and I had a come-to-Jesus about that, and that’s part of my story and my journey.”

The upcoming series of meetings beginning Wednesday offer a broadening of scope that Mize said make them more comparable to Al-Anon, the support group for people affected by alcoholism but who don’t necessarily suffer from the affliction themselves.

“My thinking was anybody who’s honest could participate because racism affects everybody, whether or not you think you are a racist or have to deal with any directly,” he said.

In addition to group discussion, the upcoming meetings include lessons from a study guide published by the Presbyterian Church (USA) called Facing Racism. The guide describes racism as “the original sin of the United States,” which “often cloaks itself in myths and laws that make it difficult to detect by those who benefit from its existence.” 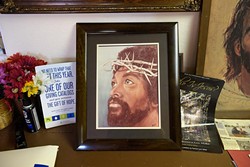 Patsy Smith, an elder at Trinity, said the way racism is ingrained in society can make it harder to identify and guard against.

Huretta Dobbs, a Trinity elder who attends the church with four generations of her family, said she hopes the upcoming meetings will help her process her own personal history.

“I would like to know how racism in my past, 70 years ago or more, affected me,” she said. “What did my responses to that racism say about me, and what has been its affect upon my life now, just to be able to face that?”

“We’re mostly past people taking fine points of Bible verses out to justify racism,” Mize said. “But churches in general aren’t to the point where they’re actually hearing what the Bible says about the love of god and community and getting along.”

That is why Mize said he hopes that though the Facing Racism study guide cites verses from both the Old and New Testaments, nonbelievers will still be willing to attend the meetings.

“I have a concern as a pastor that the Bible part’s going to turn some people off, that it’s going to keep some people from coming to this,” he said. “If you’re agnostic or if you don’t do church or you’re tired of it or whatever, I want you to know what the Bible says about [racism]. … The church needs more than itself to keep it accountable, sadly.”

Trinity deacon Delores Smith said she hopes the new meetings give younger members a biblical foundation from which to process and combat intolerance.

“Trusting in man is not strong enough,” she said, “but if they see it in church and they hear it at home, then when they go out in public and in society, they have a shield; they have something to stand on — the truth — and they can make that change and pass it along.”

Courtney Smith, Patsy Smith’s 22-year-old daughter, said that even though the meetings deal with racism, they are ultimately “about love not hate.”

“Even if we can’t dampen it or remove it, we try to balance it out with love,” she said. “It’s not about just pointing out hate or being hateful or, ‘Hey, I’m being hateful.’ It’s saying, ‘I’m being hateful; how can I rectify this? How can I change this and stop being so hateful? How can I try and love more?’”

Mize said he would like the meetings to spark similar conversations in other places of worship.

“What I hope is that, ideally, other churches cowboy up,” he said. “See what we’re doing, and whatever fits within your church community, do something. ... This is a disease in this society and in this country and in this world, and I think it’s a dereliction of Christian duty to just let it slide.”

print headline: Learning not to hate, Trinity Presbyterian Church begins a program on dealing with racism.