As Oklahoma enters autumn, a trip to a tropical-themed dispensary might be just the moment’s needed vacation. 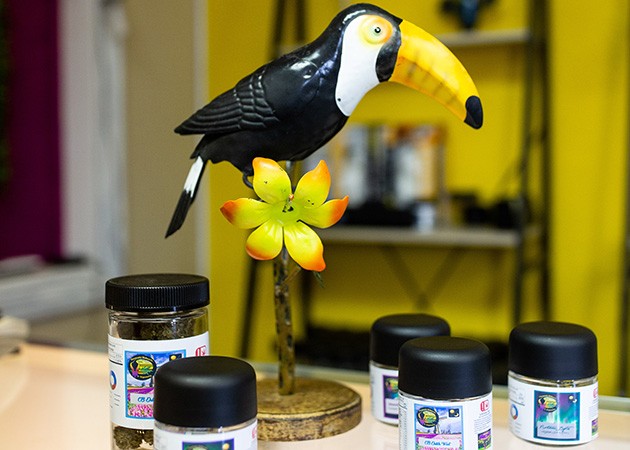 With the summer now behind us, if you missed a tropical vacation this year, you might at least get a glimpse of one by visiting some local tropical-themed dispensaries.

It opened as a CBD store well before carrying THC products.

“We did CBD for about a year, and then we introduced our THC products in April of 2019,” manager Carl Witten said.

“We actually grow all of our own flower, so there was a lot of initial startup costs and transitioning, cleaning out the original property and making it suitable for growing in and then just the learning curve involved in the growing process was quite a transition as well,” he said. “We were lucky enough, through some of our connections to the CBD market, to pair up with somebody in Colorado that had been growing for about 10 or 15 years, and they went along with a style that we were looking for anyway with the no-till, 100 percent organic soil, so it was really a nice pairing, and he helped us out quite a quite a bit.”

The property itself had been owned by the family for about 30 years and was transitioned into a growhouse with a dispensary storefront.

“Whenever news of [State Question] 788 came out, we started discussing it,” Witten said. “We’re all female-owned, and two of our owners are nurses, and it’s something that they’ve been talking about for a while because they have seen the benefits and pros and cons of both pharmaceutical and natural. So we wanted the opportunity to grow a product that we would be proud to share and make sure that we help as many people as possible.”

Owner Marilyn Murphy came up with the company’s name and designed the tropical decor of the dispensary.

“She’s a very big beach fan, so anything to relieve the haze of the day-to-day. We like it. We’re comfortable here, and it’s a place we like hanging out,” Witten said.

“Me and my husband love to go to the Caribbean and my whole backyard, swimming pool, all around that is done with toucans,” Murphy said. “We call it Parrot-dise.”

She was not high when she thought up the brand name.

“I’m a registered nurse, so I don’t get to do that,” Murphy said.

“She’s actually the most level-headed person in the ownership group,” Witten said.

In addition to the aforementioned tropical bird, the rest of the dispensary contains scattered tropical memorabilia, much of it from Murphy’s personal collection. There are also a number of pieces of original tropical art adorning the walls.

“We didn’t want to get lost in the crowd, so we didn’t want to be the 1,500th dispensary with ‘green’ or ‘canna’ or ‘high’ or this or that,” Witten said. “We kind of wanted to be a little bit more subtle with what we’re doing. Toucannabis, a lot of people miss the fact that ‘cannabis’ is even in there, believe it or not.” 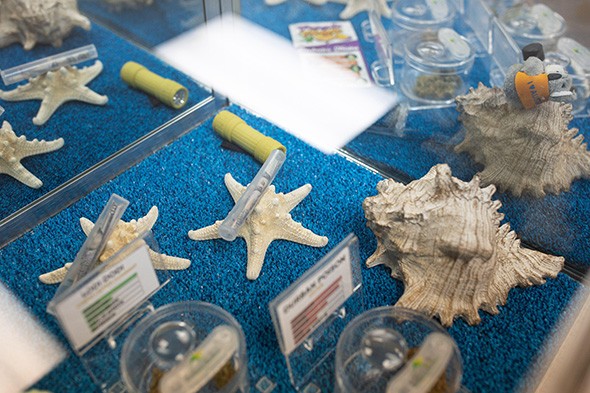 David Walker almost made the same mistake. His store was originally slated to be called Buddies 420 OKC.

“I was going to trademark the slogan, ‘Come in and meet your new best buds,’” Walker said.

After receiving a complaint from another dispensary with a similar name, Walker consulted with his business mentor.

“‘You’ve got to come up with something for your Australian background. Be smart.’ He goes, ‘I don’t know. You’ve got the Great Barrier Reef; you can think of something,’” Walker said.

“I couldn’t imagine ever being a different name. It goes with my background, with everything. If you look in the store, my brother — this is the home state where I’m from, Queensland — my brother took all these pictures in here,” Walker said. “There’s so many places here. In a saturated market, you’ve got to do something to differentiate yourself, and most people know what the Great Barrier Reef is. So adding a marijuana theme to it, and then I can do a fun coral theme in the store, I thought it was a smart way to differentiate and bring out my culture and my love for the beach and everything I grew up with and try to bring a fun Australian vibe to Oklahoma.”

Born in Brisbane but having dual citizenship, Walker moved to California for three years before being offered a full baseball scholarship at the University of Central Oklahoma. He met his wife, believe it or not, working at Outback Steakhouse before moving into a sales position and opening his own business.

Walker incorporates Australian slang into the specials, menu and marketing. His accent when greeting new patients is unmistakable.

“People always like to say, when they come to the store and I kind of explain that my brother took these pictures, that’s the beach I grew up with, they go, ‘What the hell are you still doing here?’ I go, ‘Well, I’ve met a perfect girl. It’s cheap to live in Oklahoma, which is awesome because you can live a great life.’ I go, ‘And I can save money to travel and I never take a place like that for granted,’” Walker said.

Humorously enough, even though it was in his home state, he has never visited the dispensary’s namesake.

Exposed to cannabis as a young teenager but abstaining for sports and personal reasons, Walker has returned to the herb that has brought him relief from a degenerating disc in his back after his days on the diamond.

“I love the recreational side. I’m gonna lie if I say I used to start with medicinally or anything, but it does help my back a lot,” Walker said. “I’ve had three loves in life: baseball, family and marijuana. Marijuana has never done me wrong. It’s never said ‘no’ to me. It’s never said, ‘I can’t do this.’ It’s always loved me.”