I’ve never quite understood why sushi and steak are always getting shoved together. 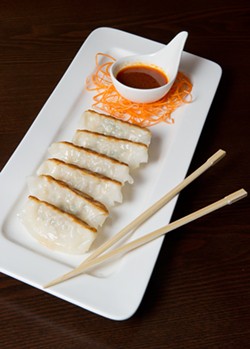 I’ve never quite understood why sushi and steak are always getting shoved together.

Don’t get me wrong; I love both of them. I named my children after them. My son, Prime Marbled. My lovely daughter, Nigiri Uni. But, much like my children, I’m always surprised when people want them to hang out.

Generally, if you’re doing a great job with steak, you’re not so hot with the sushi. Places that excel at sushi don’t always cook the best steak. Yet so many Japanese restaurants, like Tsubaki Sushi & Hibachi, 5900 W. Memorial Road, are doing both at once.

You will be forgiven for driving past Tsubaki a few times before finding it. Crammed between a gas station and a Jimmy John’s Gourmet Sandwiches, it’s easy to miss. However, once you’ve been inside, it’s hard to forget.

It doesn’t have the flash and style of Sushi Neko, but Tsubaki presents a clean and modern atmosphere that’s classy enough for a date but laid back enough for the kind of date on which I would go. It’s nice, it’s sedate and the service is excellent.

The portion size on the tuna tataki ($10) leaves a bit to be desired, but that might just be down to my gluttony. Quick-seared tuna is sliced thin, served in a slightly sweet sauce and topped with a salad. Each bite features the crunch of greens giving way to the tender tuna, which practically melts on the tongue. Can you tell I liked it? I liked it. There. No more confusion.

For something ever so slightly more filling, the gyoza ($5.50) come either fried or steamed.

I always order the mackerel nigiri ($3.75) at sushi restaurants because I like the flavor and because, as a slower- selling fish, the quality of the mackerel can tell you a lot about the rest of the menu. In this case, the mackerel was firm with a neutral smell (that’s good) and a potent flavor (that’s also good). If you haven’t had mackerel, give it a shot so I don’t feel weird being the only guy who likes it.

The sushi rolls are what most people get, and Tsubaki has a few winners. You can’t go wrong with a spicy crunchy tuna roll ($5.50), and I was quite happy with this version. The Philadelphia roll ($6.25) was nice, too, with a good crunch to the cucumber.

For the more expensive specialty rolls, I recommend the Heart Stealer roll ($13) which is whimsically shaped into half-hearts — all the better for stealing away a piece. With tempura shrimp, jalapeño, avocado and cucumber, it’s got a little crunch, a little heat, a little fat and an amazing flavor. The only broken heart I get from this roll is when I realize it has all been eaten.

I was less impressed by the Godzilla roll ($12), which packs in tuna, salmon and yellowtail (withcheese and special sauce) before it gets deep fried. I don’t know if it was the fish that was fishy or the oil it was fried in, but there was an off flavor. If you’re the kind of weirdo who gets chicken fried rice ($10) at a Japanese restaurant, congrats on being my son. (I love you, Prime.) It had the right amount of grease, good chicken flavor and lots of crunch from the vegetables fried in.

On the grilled side of things, the Tsubaki hibachi ($20) lets you pick two proteins (chicken, steak, shrimp, scallops, salmon or lobster) to be cooked up with rice and vegetables on the griddle. I got the steak and shrimp. While I liked the way the meats were cooked, I was a little disappointed to find them doused in a sweet sauce, which kind of invaded all the other elements on the plate.

Tsubaki is a grown-up sushi spot in a part of the city that needs it. And while I’m not completely sold on the hibachi portion of the menu, the sushi is good, the service is wonderful and the prices are reasonable.

For those tired of wandering the hinterlands of Memorial Road, searching for non-chain restaurants, Tsubaki is a welcome and tasty relief.

792-7818 What works: The Heart Stealer roll will steal your heart. What needs work: The fishy Godzilla roll. Tip: Sit at the bar and enjoy the show.