Tuesdays might be traditional, but Hugo’s Taquizas serves great food, including tacos, every day 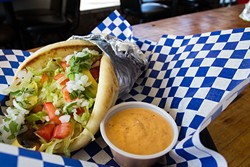 Only a fool waits for Tuesday to eat tacos.

Alliteration is awesome, amazing, acceptable, absolutely available as an alternative. But it’s no way to live.

You wouldn’t wait until Friday to put out a fire. Nobody says, “I’d like to get this malaria treated, but it’s not Monday.” We take care of problems on an as-needed basis, and your as needs to eat some tacos now.

In related news, let me tell you about Hugo’s Taquizas, 3409 NW 23rd St., which is a restaurant that sells tacos and taco-related foods.

On Tuesdays, Hugo’s sells its delicious, tiny little tacos for $1. On a non-Tuesday, the tacos are $1.50 or $1.75. So, if you’re on a budget, Tuesday is a great day to go. And if you just want tacos, lots and lots of little tacos filled with different kinds of meats, Hugo’s is a great place to go.

On a big board, they have a list of Carne Y Guisos — aka The Meats — divided up by color. Red are cows. White are chickens. Green are pigs. You should try a little of everything. That said, not every meat is available every day.

You probably can’t go wrong with carne asada (steak), so if you’re looking for a larger taco experience right off the bat, get a Tacon ($4.49) with asada. A Tacon is a taco stuffed in a pita. It’s a gyro taco with lettuce and tomato and avocado. There’s nothing wrong with this at all.

Some people like burritos, and by some, I mean all. When someone says, “I don’t like burritos,” it’s your duty as a citizen of Earth to report them to the authorities because that person is from space and is likely here to enslave the human race. Just FYI.

If you want to prove your loyalty to the planet, step up to the challenge of the 007-B Impossible Burrito ($9.99). They will let you put up to four meats in this burrito. It takes two giant tortillas to contain the tidal wave of meat, rice, beans, onions and cilantro trying to burst forth into your mouth. It has the circumference of a Coke can and is about four times as long. 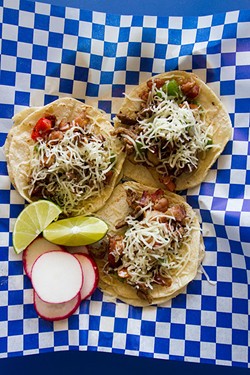 But perhaps you don’t have some kind of burrito-based death wish. You could instead get a quesadilla. The Campechana ($5.99) is a grilled tortilla stuffed with carne asada and chorizo with cilantro, onion and cheese. It’s greasy and kind of wonderful.

It’s not always available, but the Tacos Dorados ($5) is worth seeking out. You get five tacos stuffed with mashed potatoes, deep-fried. Then they put cabbage and tomatoes and salsa on top. Crunchy-creamy-fresh-spicy. It’s exactly like the rap album I pitched to Death Row Records a few years ago.

The Pambazos ($4.75) ... I’m not even sure how to describe one. It’s a sandwich with fried potatoes inside. There’s chorizo, so it’s spicy. There’s a ton of shredded lettuce and cheese. It’s a mess, a giant, delicious, elbow-your-loved-ones-to-keep-them-away mess.

If you are the sort of person who goes to a taqueria for breakfast, hello. I’m glad we’re friends now. Let us seal our bond with matching tattoos. But also, you might like to know that Hugo’s serves lots of breakfast tacos and burritos but also kid-friendly favorites like pancakes (3 for $4.49) and torrejas ($4.49), which they describe as “Mexican French toast.” Why French people are horning in on this, I do not know.

All I do know is that Hugo’s Taquizas is a heck of a tasty little taqueria. The picnic tables are big enough to seat a crowd, and the prices are low enough that everybody will get enough to eat.

Most importantly, it serves tasty Mexican dishes you’re sure to love even if it isn’t Taco Tuesday.

What works: Giant burritos and tiny tacos What needs work: The language barrier at the counter can be a hindrance. Tip: Some meats, like carnitas and steamed pork, are only available Saturday and Sunday.